Hutch  |  Commercial Director
Thu 14 Oct 2021
Having come close to a GSP on the opening two weekends, Round 3 was a shocker with just 4 correct picks out of 8.

Four big upsets, including one draw, tripped me up, although it was great to see some victories for the South African teams as they start to find their feet in the new competition.

Here are my United Rugby Championship predictions for Round 4 this weekend. 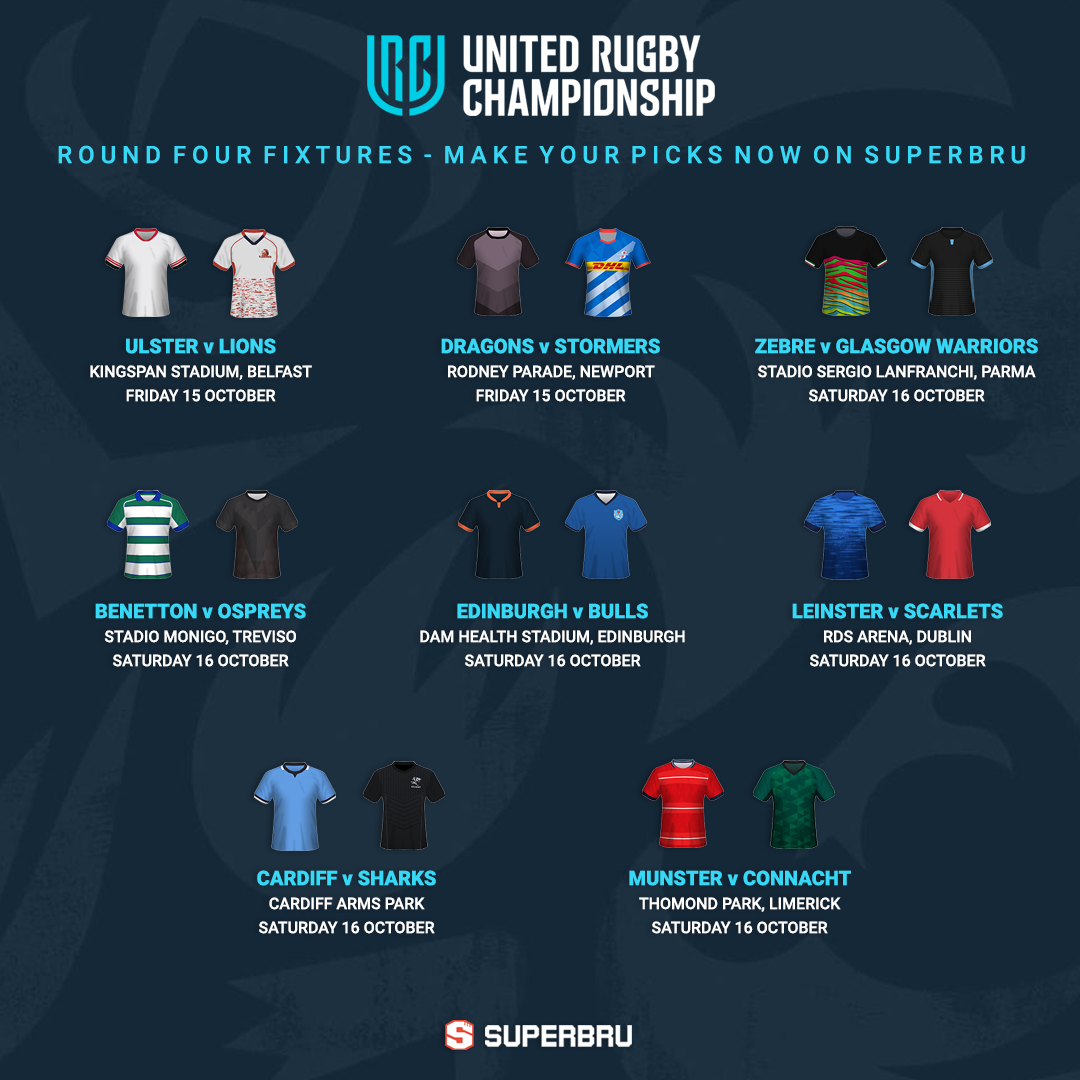 Ulster have started the tournament strongly with three victories so far, and this is likely to be another one. The Lions should be encouraged by their performance last week, but they won’t get as close to Ulster. Ulster by 13

The Dragons were underwhelming in the first two rounds with two defeats at home, but then somehow won away at Connacht last weekend. I still don’t rate them very highly though, and I’m picking the Stormers to pick up their first victory of the tournament. Stormers by 4

The Zebre defence has been almost non-existent so far, with 114 points conceded across their opening three matches. Glasgow’s attack could run riot here. Glasgow by 28

The Ospreys haven’t been terribly convincing so far, and I’m leaning towards the home team here. They cost me the GSP in the opening two rounds, winning when I’d picked them to lose, so I’m getting behind them for this one. Benetton by 4

The Scarlets conceded 43 points at home to Munster last week, and this is likely to be an even tougher fixture, away at Leinster. Leinster by 18

The Bulls finally picked up a win, away at Cardiff last weekend, and there are encouraging signs for all the South African teams. Edinburgh are tough to beat at home though, and I think they’ll edge this one. Edinburgh by 2

Connacht beat Munster in their most recent fixture back in May, but Munster are the stronger side and they should win this at home. Munster by 13

This is another tough pick to end the round, with the Sharks looking to follow up their impressive win over the Ospreys last week. It feels like a 50/50, and so I’m backing the home team. Cardiff by 4

Daniel
1,345 cap
Why do you always pick against SA Hutch?
Report

Bomber
64,060 caps
Hutch is from England so possibly his heart is with the Northern Hemisphere teams. Entirely understandable. 15 Oct 18:31
Report

Daniel
1,345 cap
Not bad picks. But I hope Bulls and Stormers win
Report

Daniel
1,345 cap
I totally agree with you Fred
Report

Ulster vs Lions
Ulster is unbeaten and the Lions is not such a strong side. The Lions should have won last week but they did not, and they will fall short again.
Prediction: ULSTER 15

Dragons vs Stormers
The Stormers almost won last week as they drawed against Edinburgh. Dragons on the other side got their first win last week upsetting Connacht. But I hope the Stormers will win.
Prediction: STORMERS 3

Zebre vs Glasgow
Zebre is bottom off the log and I think they will stay there for the rest off the season. Glasgow was lucky to win the Lions, but they won't need luck to beat Zebre.
Prediction: GLASGOW 15

Benetton vs Ospreys
Benetton got thrashed last week and almost the same thing happened to Ospreys. Both will be fighting harder than ever to win and I'm going for the upset.
Prediction: OSPREYS 3

Edinburgh vs Bulls
I'm a Bulls fan and I was very happy when they won last week against Cardiff. Edinburgh drawed against the Stormers and the Bul

Anthony(Bul)
8,200 caps
Its tuff to take a chance to pick for the away team when its a 50/50call.the South African teams proved us last week how dangerous they can be and they will make tuff calls to pick on.bulls sharks stomers are on my list to win
Report

Fred Smith
6,364 caps
Some of the Refs are seriously not well if look at the Bulls game and Sharks game. Two seperate rule books or just blatantly cheating Sa teams. Spoiling whats suppose to be a stunning Competition.
Report
Edition: North America change
Superbru on Facebook
Superbru on Twitter
Superbru on Instagram