Hutch  |  Commercial Director
Thu 7 Oct 2021
The GSP continues to elude me, as I recorded 7 out of 8 correct picks last weekend, and it was Benetton once again that scuppered me.

Here are my United Rugby Championship predictions for Round 3 this weekend. 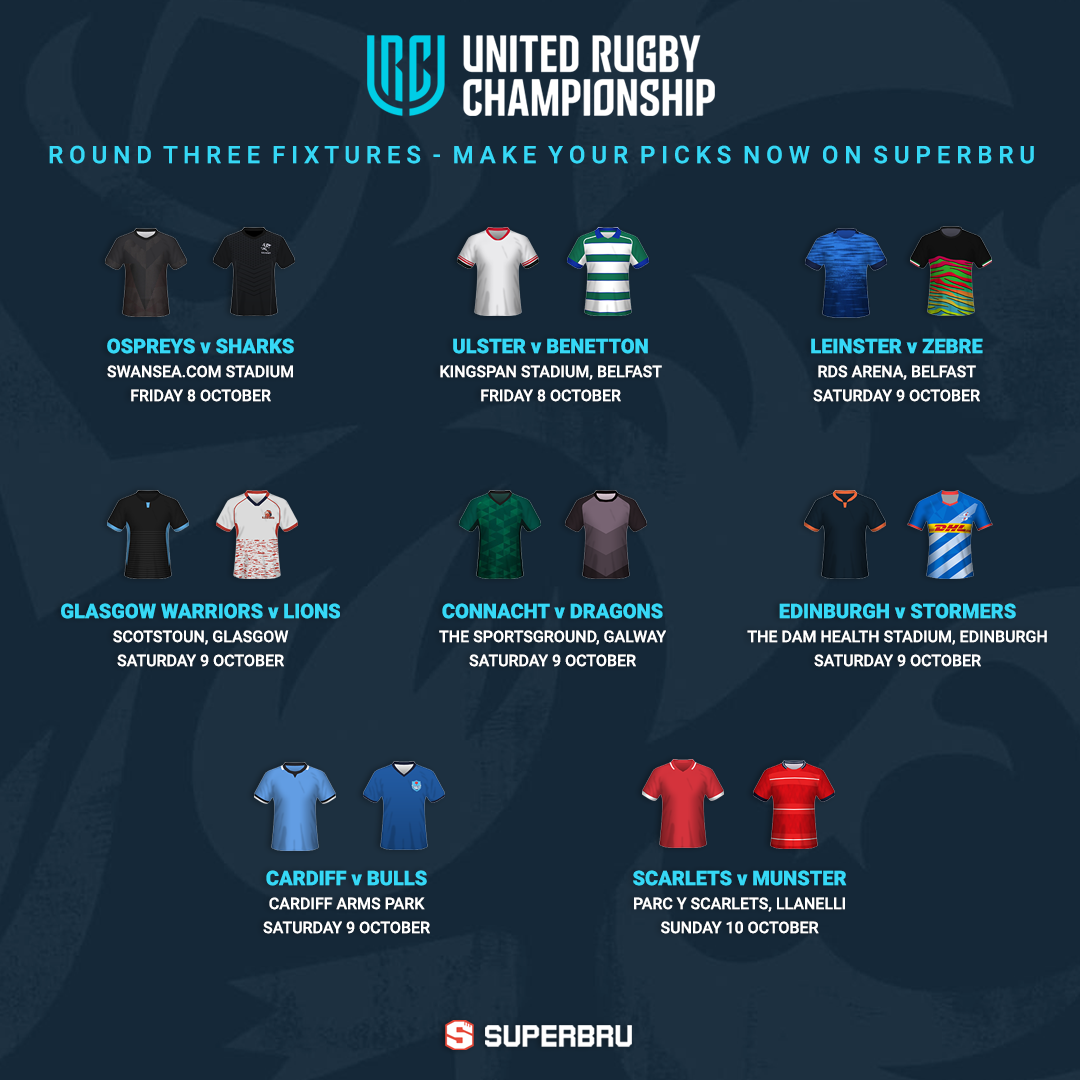 The Sharks have had a tough start so far, and this is their first real opportunity for a win. But yet they’ve dropped Curwin Bosch and made a host of other changes that are unlikely to help. Ospreys by 9

Benetton are my new bogey team and perhaps I should start showing some more respect to the Italians. They’ve done well to win their opening two matches, but I still think they’ll be well-beaten in Belfast. Ulster by 13

Leinster’s narrow win over the Dragons last weekend was something of a surprise, but normal service should resume back in Dublin, and this will be a one-sided affair. Leinster by 23

The Lions are the only South African team to chalk up a win so far, but they are underdogs here, particularly after their heavy defeat to the Scarlets last weekend. Glasgow by 11

The Dragons never win in Galway, and that trend should continue this weekend. Connacht dispatched the Bulls in Round 2, and this is likely to be a similar story. Connacht by 18

The Stormers have a chance of winning this one, and although they lost to Munster, there were signs of improvement. A home win is the most likely outcome though. Edinburgh by 8

It was a horror show for the Bulls last weekend, and they’ll be pleased to leave Ireland, having conceded 65 points and scored just 10 across their two fixtures so far. This Welsh side won’t be as strong as the Irish, but another defeat looks likely. Cardiff by 8

This could be the match of the weekend, and it’s the only away win I am picking in this round. Munster have won 4 of the last 5 against the Scarlets and have looked impressive in beating two South African teams so far. Munster by 4

Supperman
28,471 caps
I was lucky last week 8/8 but there where two narrow games lucily it bounced in my fafour
Report

caplegal
27,699 caps
Well Hutch. You should get the slam point this week as I have the same winners. My bogey last week was Ospreys beating Cardiff. 7 Oct 17:35
Report

goldorak
36,863 caps
Reckon many will struggle to field 15 players in the URC, especially those of us who mostly/only pick euros. Lots of rotation already and the euro cups/test footy havent even started yet! carnage every week!
Dont really get why we only have 4 transfers/week when we had 10 during the RC (4 teams, short comp, less rotation although covid did make it more challenging) and 4-6 (forgot) during SR again a much shorter & compact format and smaller squads. European club rugby is a different beast.
Report

Hennie
8,309 caps
Totally agree with you! I just resigned from this competition. With 4 transfers, in the backline, I couldn't field a full backline for this weekend, let alone the forwards. Last weekend was exactly the same. Waste of time. 8 Oct 13:01
Report

Lions.4eva
12,711 caps
This comp is difficult with only 4 transfers. The Irish change the whole team each week. This week have 4 non starters in the line up with 2 on the bench and only 3 subs of which all are on the bench. Hoping no run on changes. 8 Oct 14:19
Report

Bomber
70,212 caps
I agree with everyone above. SuperBru are you actually competing in the Fantasy competition ? 4 transfers per week is too little, there are wholesale squad changes every week. This week I don't have a centre or a scrumhalf, and my hooker is on the bench. 4 transfers also gives you no room to remove poor players and strengthen your squad. All it is about is hoping to get 15 players on the pitch. SuperBru please give us an answer !!!!!!!!!!!!!!!!!!!!!!!!!!! 8 Oct 16:01
Report

Cesmithy
35,034 caps
Superbru did answer a tweet about subs saying thinking of increasing for later rounds esp not back to back rounds (after int break) but could not change it this round as people allready picked with the 4subs so be unfair to increase it 8 Oct 19:28
Report

Lions.4eva
12,711 caps
Edinburgh v Stormers and the Cardiff v Bulls game my present an upset. Will see how the weekends first few games go before i make a call and change from home side.
Report

Cozarro
29,324 caps
It's hard to complete full fantasy team this week with only 4 transfers, too many changes in teams and many main players absent
Report

Bomber
70,212 caps
I agree with everyone above. SuperBru are you actually competing in the Fantasy competition ? 4 transfers per week is too little, there are wholesale squad changes every week. This week I don't have a centre or a scrumhalf, and my hooker is on the bench. 4 transfers also gives you no room to remove poor players and strengthen your squad. All it is about is hoping to get 15 players on the pitch. SuperBru please give us an answer !!!!!!!!!!!!!!!!!!!!!!!!!!! 8 Oct 16:02
Report

Bomber
70,212 caps
I agree with everyone about the weekly transfers. SuperBru are you actually competing in the Fantasy competition ? 4 transfers per week is too little, there are wholesale squad changes every week. This week I don't have a centre or a scrumhalf, and my hooker is on the bench. 4 transfers also gives you no room to remove poor players and strengthen your squad. All it is about is hoping to get 15 players on the pitch. SuperBru please give us an answer !!!!!!!!!!!!!!!!!!!!!!!!!!!
Report

Jersey-puller
26,210 caps
Yes 4 transfers is too few. I've managed 15 each round though but only by guessing who out of DNPs might come in the following round. Yet some have been rested two rounds running. I have 14 starters & 1 benchee prop in my XV. My own bench has 1 benched prop & 7 totally rested. No room to manoeuvre, just 4 transfers used up to plug FH, C, OB & LF. But luckily these are higher scoring positions. Same for everyone though but less chance for skill to add more points than dumb-picking luck.
Report

Cesmithy
35,034 caps
Yeah had a few players in my club complain at just 4 subs, tbh not much of a rugby expert myself alot more qualified then me, I managed to make transfers to field a starting 15 but no chance to do tactical transfers.
Report

The Professor
54,987 caps
Totally agree with above comments regarding the amount of transfers for the URC competition. Superbru management must recognize this is an extremely long tournament going well into next year. And any coach with a half a brain will be rotating their players so they can get the best out of them. Allowing only 4 transfers per week for superbru players for this competition is not enough to enable an enjoyable experience for this fantasy game. My suggestion is please increase to at least 6 transfers starting round 4. Your feedback would be appreciated.
Report

DreadedRed
28,951 caps
I have 10 starters and 3 subs in my Starting XV, with zero starters/subs on my bench. Unlike Paul (Jersey-puller, above), I did not plan for rotation. More fool me. I'd suggest that this shows that brus who plan well, and have knowledge of the vagaries of this competition; have an advantage. That's a good thing.

While I'd personally prefer 6 transfers per round, I'd rather have too few transfers than too many. Simply because it favours the better brus.

Daniel
1,600 cap
Hey DreadedRed! Yes I picked the Sharks to win! And you?
Report

DreadedRed
28,951 caps
Sharks to lose! I support them, but I'm not sure they appreciate it. If I pick them to win, they lose. At least when I pick them to lose, KZN gets something out of it. Well done to you on picking the Bulls too. SA teams perhaps getting up to speed now? 10 Oct 09:03
Report

The Professor
54,987 caps
Good to see Superbru have taken comments on board and weekly allowable transfers have been increased to 6 ( and to 8 and unlimited) in some rounds. Well done!!!
Report

Daniel
1,600 cap
I hope we are getting up to speed.
Report