Hutch  |  Commercial Director
Thu 10 Jun 2021
It’s the last round of the Super Rugby Trans-Tasman tournament this weekend, with four New Zealand teams in contention to make the final.

It could make for some entertaining rugby as the Blues, Crusaders, Hurricanes and Highlanders aim for a superior points difference. A Super Rugby triple header, followed by three fixtures from the Euros in the afternoon would normally be the stuff of dreams, but alas my three children might have other plans for my time on Saturday.

Here are my Super Rugby predictions for this weekend. 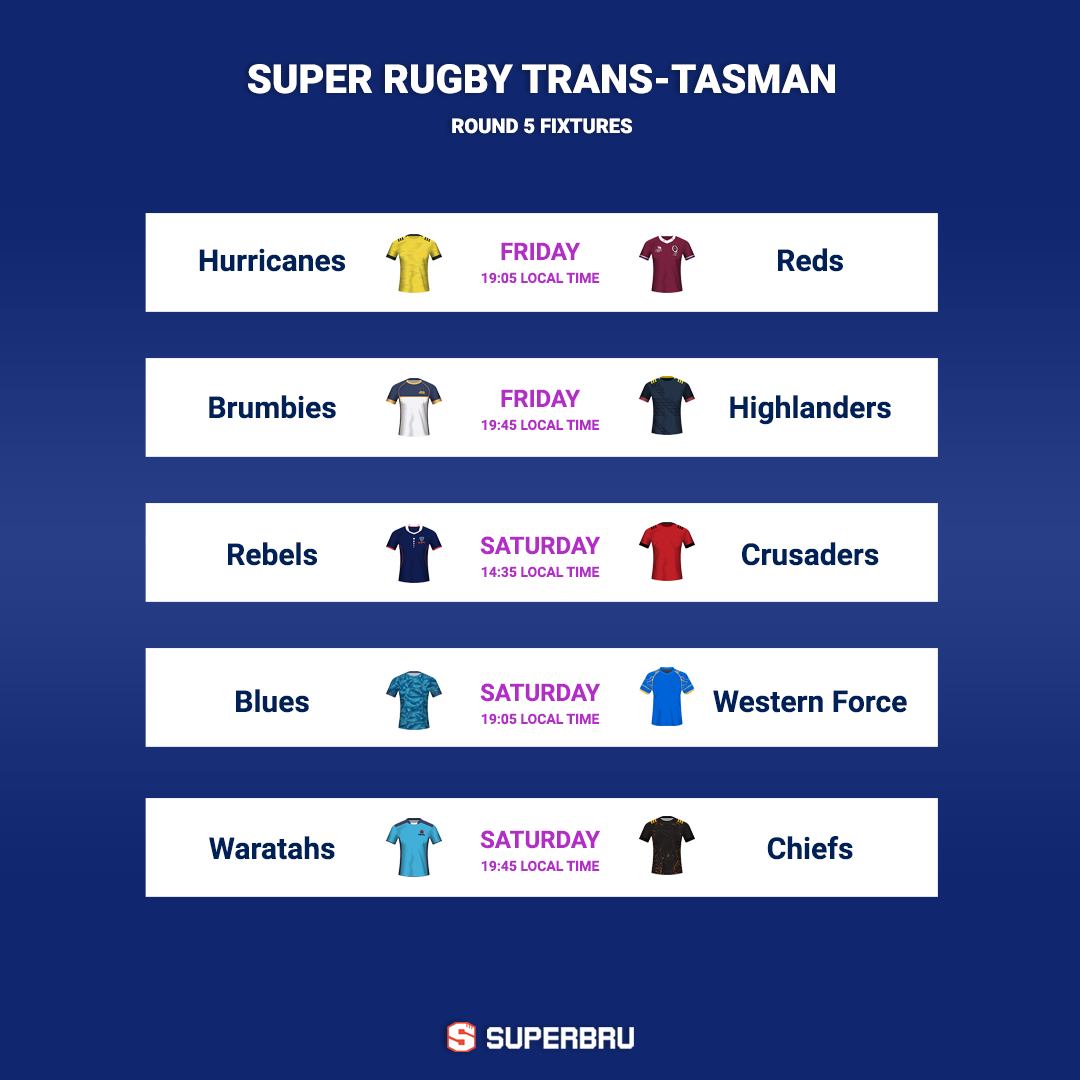 The Reds are missing James O’Connor at fly-half, and this looks like a good opportunity for the Hurricanes to set a clubhouse lead. They need a big bonus-point win and then for other results to go against them (which seems unlikely, frankly), but they’ll do their part of the job here I suspect. Hurricanes by 19

This is a tougher assignment for the 2nd placed Highlanders, up against the Brumbies, who are unbeaten at home. However, it seems as though the Hurricanes lost the match as much as the Brumbies won it last weekend, and I’m still backing the Highlanders - albeit they won’t make the final. Highlanders by 13

Any sniff of a Super Rugby final, and the Crusaders will be there. They have recalled All Blacks Richie Mo’unga, Sam Whitelock and Sevu Reece, and they’ll have the benefit of knowing what they need to do to reach the final. I’ll likely wait until Friday before locking my margin, just in case the earlier results affect things, but the Crusaders will win confortably. Crusaders by 23

A big home win here can lock in a home final next weekend for the Blues, and whilst the Force have been no pushovers, the Blues are on top form and should win with enough to spare that they can ease up a little in the final quarter. Blues by 16

The Tahs will be glad that this is the last time they have to line up against the Kiwis for a while, and they are probably in for another drubbing here. The Chiefs haven’t scored quite as many points as the other New Zealand teams, and hence are out of the running, but this is an opportunity to end the season with a flourish. Chiefs by 26

TheVikingKing
1,896 cap
Sorry to say but I am over this format and competition. It has lost its appeal. If I have to watch the kiwi teams play each other one more time in a final, I'm afraid I might just start watching tennis. This competition is unsustainable, truly miss the South African teams as well as the Argentines. Even find myself longing for the Sunwolves some Saturday mornings. I regret to say but happy to see, this comp drawing to its end. Thank goodness the Bulls will safe the day next weekend, with collecting another trophy for the cabinet at Loftus.
Report

TheVikingKing
1,896 cap
Nah stick with matches that have meaning to them like quarter, semi and finals. Not pool games. Otherwise could just have watched the Wellington test, from few months earlier. But must suck to know South Africa played in one world cup less than you and have exactly the same amount of trophies, you do! As well as, won 2 of them on foreign soil. Didn't have to host the world cup to win it a second time. 11 Jun 08:04
Report

Jersey-puller
22,114 caps
Hang about? Haven't we just had THREE SA SB Rugby contests in a row? The 20-21 Currie Cup, The Preparation H Series and this totally buggerized around with Rainbow Cup/PRO14 2 in 1 contest? Although I do feel for the Saffas not getting their own Fantasy contest when us Kiwi's got 2 for some reason.

We all miss the 5 nations involvement of the old Super Rugby but it couldn't be helped. Surely its better SB provide a good choice rather than not enough in total? Had the SA contests had a Fantasy version I'd have watched those games more often. But how many times have the Sharks, Lions, Stormers & Bulls played each other in the last 5 months? Must be about 8 or 10? The NZ teams about 5 or 6 by comparison.

To each their own?

Bomber
62,286 caps
Agreed - I personally am sick and tired of watching the South African teams bash each other to pieces. I will be in my comfortable lazy boy watching the tennis tomorrow afternoon and Sunday afternoon. Show time !!! 10 Jun 21:06
Report

goldorak
28,519 caps
'We all miss the 5 nations involvement of the old Super Rugby'. I don't. S12/14/15 were superior 'products' imo. Reckon sanzar's insistence on bringing in argies & Japanese marked the beginning of the end of SR as the n1 rugby comp (outside test footy) in the world. They had gold in their hands and somehow managed to F it up, were all about 'entertainment', exploring 'new markets', $$ and more $. Look where we are now.
And SH rugby fans not beyond reproach either, never really knew what they wanted. 11 Jun 04:34
Report

Yes but the difference is, that is not our competition format for the forcible future! We move north in 2022. You still going to be watching kiwi teams play each other again in 2022!!! Like you did in 2020 and 2021!! Peanut Butter sandwiches is nice for lunch. But having it everyday for the rest of your life!!!!! A celery stick starts becoming appealing!!! Remember during the old format of super rugby, the biggest viewer pool came from South Africa, not New Zealand and not Australia. So as a South African viewer. I'm telling you "Its getting old quick!!!!!!!". Why do you think they are bringing in a pacific island team next year. Its not cause they so nice. No, it is out of necessity "to changed the current format'!!!. Cause they themselves see the competition loosing viewer interest!!! 11 Jun 06:37

Jersey-puller
22,114 caps
I get your point totally, look at Formula 1. They basically had to hobble Mercedes to make the races far more competitive and break Hamilton's dominance. It seems to have worked & I get the sense even Hamilton is enjoying having to rise to the challenge.

But how you do it in Rugby is trickier. I joked about a year ago about how appealing the same timezone in Europe & SA must be to the money men but we could end up with a USA style TV networks driven system. Look what happened when they tried that with a breakaway Euro Football Super League, complete revolt!

The number of top SA players in France in particular is totally money driven. Perhaps more TV money will keep them back in SA?

But there needs to be space for the old SR teams to play even a reduced contest annually. I've often wondered what a best of the best Polynesian team would be capable of though. 11 Jun 17:15

GXS
604 caps
Hi guys and girls,
Even though I can't disagree with anyone's posts, especially, since I played tennis, at a rather high level, myself, years ago,
I would love to see the Crusaders Vs Brumbies play tennis...??
??????
I just love to watch rugby, the beautiful game...
Not so much Northern rugby, but Southern rugby...
I'm just thankfull to see proper rugby being played again.
If I can be a bit prejudiced, I think Aus rugby's reverting back to Gregan days...?
As soon as an Aus team is defending on their own try-line, its penalty upon penalty, before somethings being done.
Old days, it was called a professional foul, if I'm not mistaken, according to my own count of such instances, Aus teams, transgress the most of all teams, in their red area...?
Can anybody, maybe get hold of specific stats...???

topgun
11,103 caps
GXS did you win the Preparation H Cup when you played tennis at a rather high level?. LOL!
Report