Hutch  |  Commercial Director
Thu 3 Jun 2021
Round 3 finally saw an Australian victory, with the Reds beating the Chiefs, but the table still shows 5 New Zealand teams at the top and 5 Australian teams at the bottom.

Here are my Super Rugby predictions for this weekend’s Trans-Tasman fixtures. 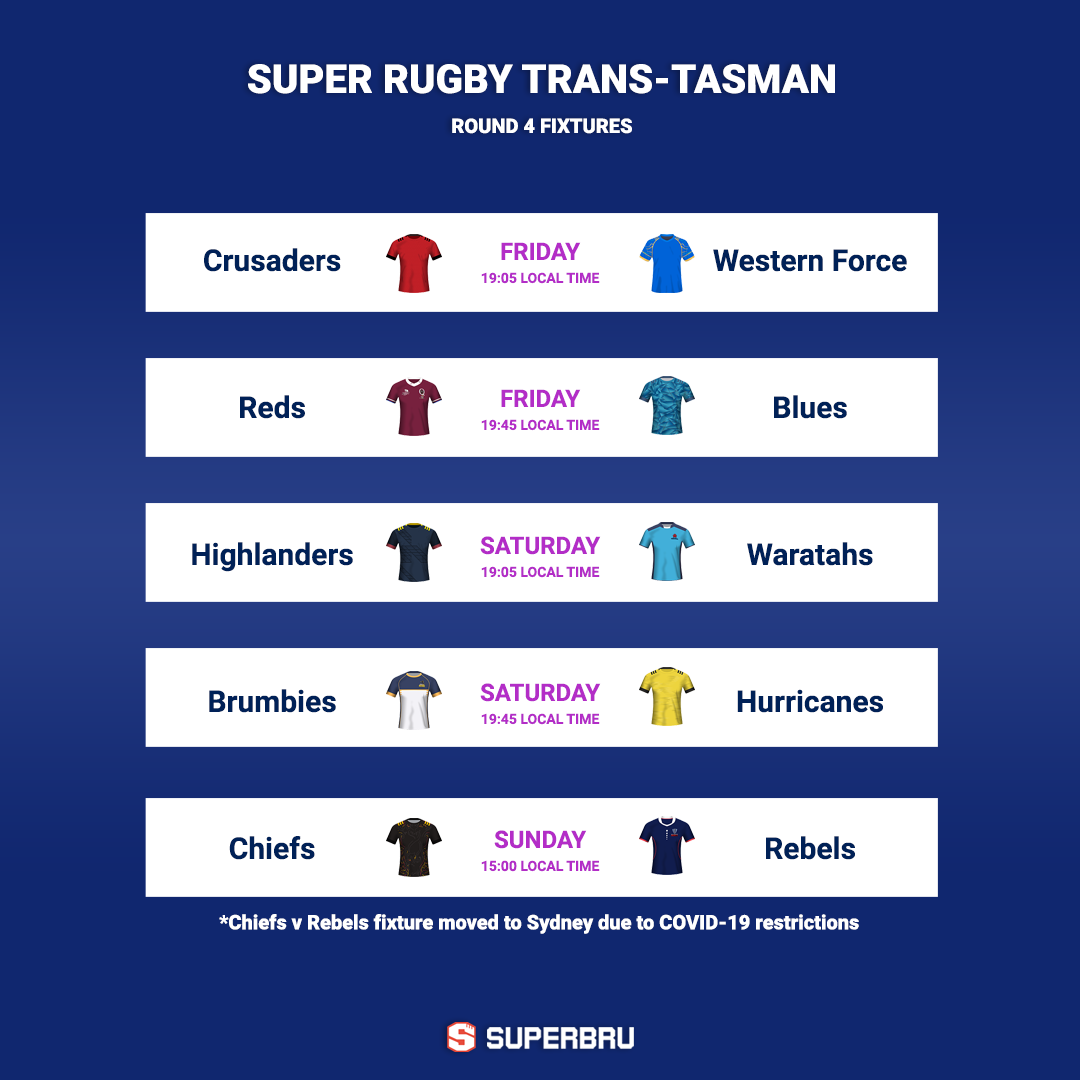 The Force are available at 17/1 to beat the Crusaders, which seems ridiculous in a 2-horse race, but I’m still not tempted. The Force started well but have been getting worse, and conceded 43 points to the Hurricanes last week. The home side will win this by plenty. Crusaders by 33

This will be an interesting fixture, with the Reds buoyant after their win over the Chiefs last weekend, up against the table-topping Blues. Nobody has got close to the Blues so far, and I think they’ll take the Reds more seriously now and beat them. Blues by 7

Things are getting embarrassing for the Tahs now, to the extent that they are unable to name a replacement prop on the bench, and have listed TBC on their teamsheet. Yes they have been unlucky with injuries, but it’s also easier to shake off a knock when morale is high and you’ve won a few games. Highlanders by 21

Having played all their matches in New Zealand, the Brumbies return to Canberra for their first home match of the season, but it’s a tough one against the high-flying Hurricanes. Home advantage will help, but probably not enough for a win. Hurricanes by 6

The Rebels have been poor so far, and I suspect the Chiefs will bounce back from their surprise defeat to the Reds. It’s not in Hamilton because the Rebels are still unable to travel to New Zealand, but whilst that offers a slight advantage to the Rebels, they need a lot more than that. Chiefs by 23

MarjK
1,679 cap
Absolutely some turnups in this round, what about the Reds against all those Blues AB's and without there two most experienced players, and I thought the Reds would get Lucky?? Most definitely the Blues were very lucky to get the win.....LOL! 5 Jun 05:24
Report

Neo9374
23,744 caps
Hurricanes only defeated Brumbies once away , really , and Brumbies still searching for a victory ?
Report

James
48,451 caps
I don't see it Neo, Canes have named a hell of a side including Dane and Ardie. I'm far more worried about the Blues who fell away in the Aoteroa tournament and the Reds are very good opposition. 3 Jun 17:36
Report

Jersey-puller
22,114 caps
Yeah James I'm thinking a narrow Reds win. Almost changed my Chiefs' win to a Red's close win last time. TBH I spend maybe 10% of my time on these Predictors & 90% on Fantasies. But you need to research the Predictor margins before you pick your fantasy XV. Anyone who picked DMac last round wasn't paying enough attention (Harsh Red Card as was Tiatia's Yellow). Tupou was an obviois pick though 4 Jun 02:43
Report

PAULY BOY
4,367 caps
Why isn't the guy playing 1st 5 8th for the Crusaders tonight available to be picked in the Fantasy game?????
Report

MarjK
1,679 cap
Gutted for The Canes, never mind Ardie Next Year will be a lot Better, Cheers!!!
Report

MarjK
1,679 cap
This is a GAME Topgun Enjoy! ,Have Fun! and that is What I am playing.
I don't have to win, as a matter of fact, it is far less stressful at the non-winning end.
No Stress and so enjoying playing and watching everyone else picking winners.
My biggest buzz is picking players that nobody else does and they do well, I could be at the winning end But that means I will be picking the same as everyone else...eg Will Jordan, Which is why I don't take the Crusaders, if I did I would be up with the rest.
No fun in picking Favourites!!! 6 Jun 12:46

Kameeldoring
1,601 cap
Nice to read about you NZ guys bantering. I have to admit I know a lot about NZ and AUS rugby. That is why this Fantasy Game is such a cracker. Greetings from South Africa
Kameeldoring
Report

topgun
11,103 caps
Hi Kameeldoring, I am English and know very little about ANZAC rugby, just enuff to beat them in MarjK pool, for the fun of it and pick a winning team. Who likes losing, o yes MarjK does, lol, part of the fun is stressing out the ANZACS and BOKS. Having fun bye. 7 Jun 13:02
Report
Edition: North America change
Superbru on Facebook
Superbru on Twitter
Superbru on Instagram