Hutch  |  Commercial Director
Thu 27 May 2021
Round 2 was frustrating for me, and I was left kicking myself for picking an Aussie team to win, particularly after predicting the first three matches within 1 or 2 points each, and I was left with a red arrow.

Lesson learnt as we move onto Round 3, where it will probably be another New Zealand clean sweep.

Here are my Super Rugby predictions for Round 3 of the Trans-Tasman predictor game. 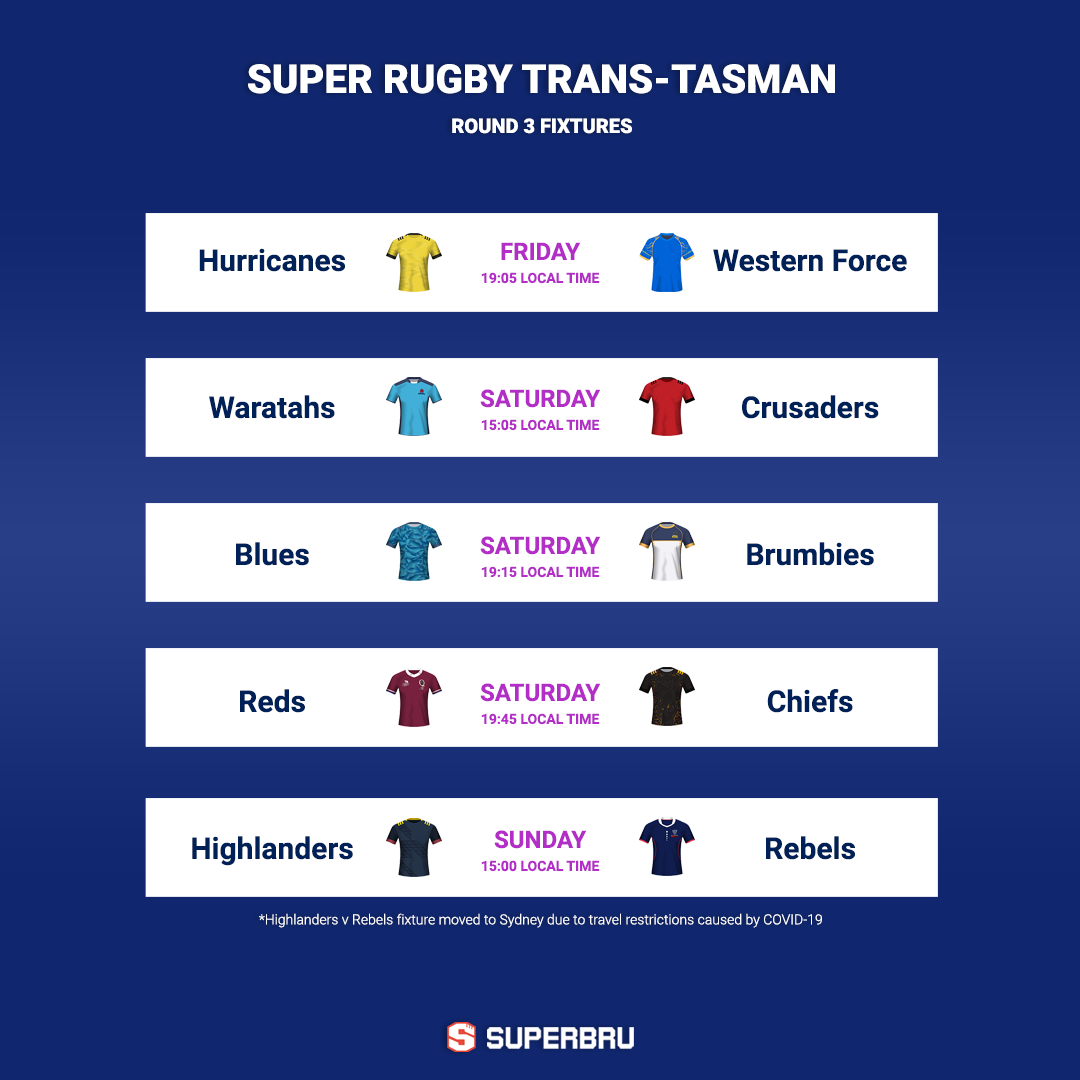 The Force have given a good account of themselves, conceding significantly fewer points than the other Australian teams. They have still lost both though, and they’ll lose this one as well. Hurricanes by 18

You can get 16/1 on the Waratahs to win, but I’m not at all tempted. They did manage to beat the Crusaders at home back in 2019, but that was a different world and a very different Waratahs outfit. Crusaders by 23

The Brumbies have had a tough schedule, with this their third straight match away in New Zealand. There may be some hope for a win next week as they return to Canberra, but you have to back the Blues here. Blues by 13

The Super Rugby AU champions have conceded over 100 points in their two matches so far, and it seems unlikely they can defeat the Chiefs here. They have picked a rookie in midfield, and have taken the game to Townsville to diminish any home advantage, and I think the Chiefs will take this one. Chiefs by 16

This fixture has moved to Sydney after the Rebels were unable to travel to New Zealand after a Covid outbreak in Victoria. It was due to be played in Queenstown rather than Dunedin anyway, so I’m not sure it will make a massive difference, and the Highlanders will still win comfortably. Highlanders by 23

TheVikingKing
1,604 cap
Good day Hutch. Any feedback on the Fantasy league for both the British and Irish lions tour, as well as for the July internationals? Would even settle for only fantasy for British and Irish Lions tour.
Report

PAULY BOY
4,255 caps
Greetings. I'm playing the fantasy game. The deadline is in an hour and you guys haven't published the squads for the Highlanders vs the Rebels even though the info is available on their respective webstes. http://thehighlanders.co.nz/media-centre/news/1085-speights-highlanders-to-play-the-rebels
https://melbournerebels.rugby/news/2021/05/28/team-announcement-vs-highlanders
Report

DreadedRed
19,044 caps
The late change of venue has forced me into dropping my 4 Highlanders’ players to the bench. A move I’ll probably regret! I’m worried about the impact on planned sessions, that perhaps had to be shelved in lieu of getting to the airport, etcetera, etcetera. I’ve even decided to start 1 Aussie! Playing Lee-Warner while Parkinson chills on the side line seems like madness, but I’m worried about the Highlanders reaction. 28 May 06:57
Report

The Professor
44,988 caps
Reds to beat chiefs in Townsville
You heard it first here
Report

Neo9374
23,456 caps
I always struggling with margins , it killing me lol , it is always a try that prevent me a margin point max

caplegal
17,685 caps
Ulster v Scarlets scheduled for this afternoon has been awarded to Scarlets.
Report

Neo9374
23,456 caps
This Chiefs side are only Nz side that dissapoints me as usually
Report

Prowler
20,503 caps
Ah I see the Australian refs have been instructed to level the playing field a bit and give the Aussie sides a chance. 4 yellows and a red for kiwi teams vs 2 yellows for the Aussie teams so far.
Report
Edition: North America change
Superbru on Facebook
Superbru on Twitter
Superbru on Instagram