Hutch  |  Commercial Director
Thu 20 May 2021
There were 5 New Zealand wins from 5 last weekend, as most people predicted, but some of the margins were a surprise - particularly the Crusaders and Chiefs being pushed very close by the Brumbies and Force.

This weekend, I think there’s a chance of an upset or two, but I’m not sure if I’m brave enough to pick one.

Here are my Super Rugby predictions for Round 2 of the Trans-Tasman predictor game. 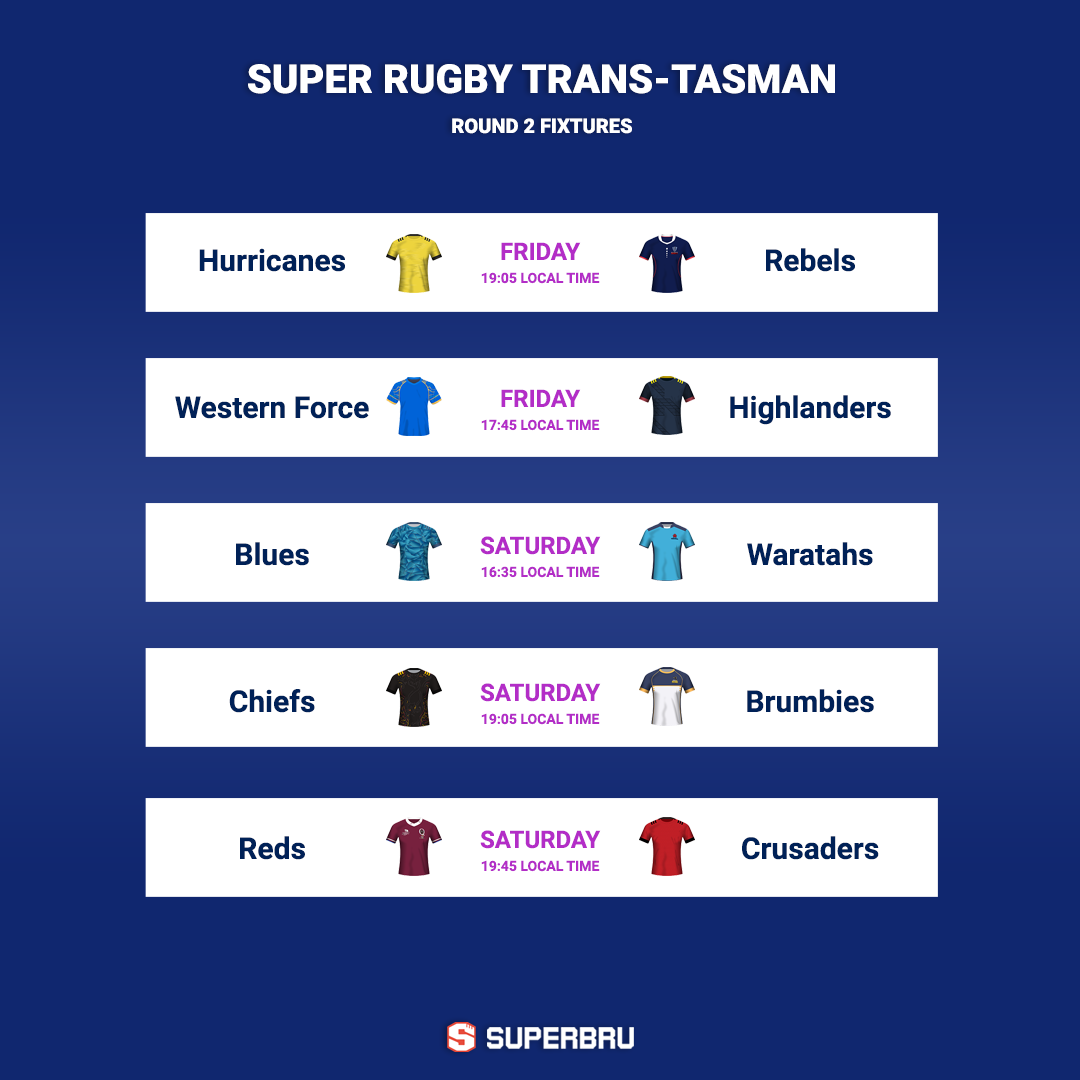 This isn’t the one where I sense an upset. The Rebels were annihilated at home by the Blues, and I can’t see them getting anything from their trip to Wellington. The Superbru historic results list shows a single Rebels win over the Canes, back in 2011, whilst all other matches have been double-figure margin wins for the Hurricanes. Hurricanes by 21

The home side has a chance here, and will take confidence from their effort against the Chiefs last weekend. The Highlanders easily overcame the Reds at home, but the scoreline was flattering given the Reds were missing several star players. I think the Kiwis will win, but it could be close. Highlanders by 6

This is an obvious pick, and it should be a very comfortable home win. The Waratahs scored more points than expected last weekend (48!), but if you concede 64 you’re unlikely to win the game, and this could be another high-scoring affair. Blues by 18

The Brumbies could win this one, and they actually beat the Chiefs in Hamilton last year having put 54 points on them the year before. There will be no fear, having performed well against the Crusaders in Christchurch last week, and I think they have a much bigger chance than the bookies are giving them. I’m tentatively picking the Brumbies, but I may lose my nerve closer to kick off. Brumbies by 2

The two Super Rugby champions face each other in Queensland, and the Reds have reinstated their senior players who were rested for Round 1. This is another fixture that could go canary yellow rather than New Zealand black, and I might see how the other results go before locking my pick. For now, I’ll play it safe by picking the Crusaders. Crusaders by 4

TheVikingKing
1,896 cap
Good day Hutch. Don't know whose arm you need to turn, back at the office. But please, please, put in good word, so that we can see a Fantasy league for both the British and Irish lions tour, as well as for the July internationals! Would make 2021, bit less bitter.
Report

Jersey-puller
22,114 caps
The bookies just follow Rugby Public Opinion remember. Privately they may want to set the SP (Starting Price) in favour of the Brumbies but it soon gets distorted by Fan Power. I think it could come down to a missed kick again. Not many teams will come away with a losing bonus point in Christchurch, no wonder they looked relatively pleased at the end.
Report

James
48,451 caps
Last week I found myself screaming for Miotti to convert his try for the win. None the less Chiefs are a far better side than they showed last week so Im backing them to beat the Brumbies this week. Again all 5 NZ wins!
Report

MarjK
1,679 cap
I was very surprised Miotti missed that kick, personally I thought the Force played better,
I am picking the Force to win, love their attitude and determination, the Landers are not as good away from home/the Zoo???
Love the Chiefs/Dmac what a MAGIC player but they are going to have their work cut out, Brumbies to win by 14. Love their backline, Banks, Kata, Simone, Wright etc...Massive!!! 21 May 02:59

caplegal
18,533 caps
The Roosters felt the full outcome of the crackdown on thuggery. Radley was binned twice and put on report for two other offences. Things like that have an effect on mindset, hence the likelihood of a few upsets until the message gets through and the game becomes cleaner. 22 May 11:13
Report

Prowler
20,660 caps
I never pick an Aussie team over a Kiwi team. The odds of it happening are just too low.
Report

Neo9374
23,744 caps
It is only Reds or Brumbies can cause an upset , like you said , the chance it is happening is very rare
Report
Edition: North America change
Superbru on Facebook
Superbru on Twitter
Superbru on Instagram