Hutch  |  Commercial Director
Thu 13 May 2021
The start of the Super Rugby Trans-Tasman tournament this weekend feels like another step towards normality, and it should make for a great Superbru tournament.

How the two sets of teams will compare is likely to be a major talking point, although looking at the Round 1 fixtures, I don’t think the Aussies will fare too well to begin with.

Here are my Super Rugby predictions for Round 1 of the Trans-Tasman Predictor game. 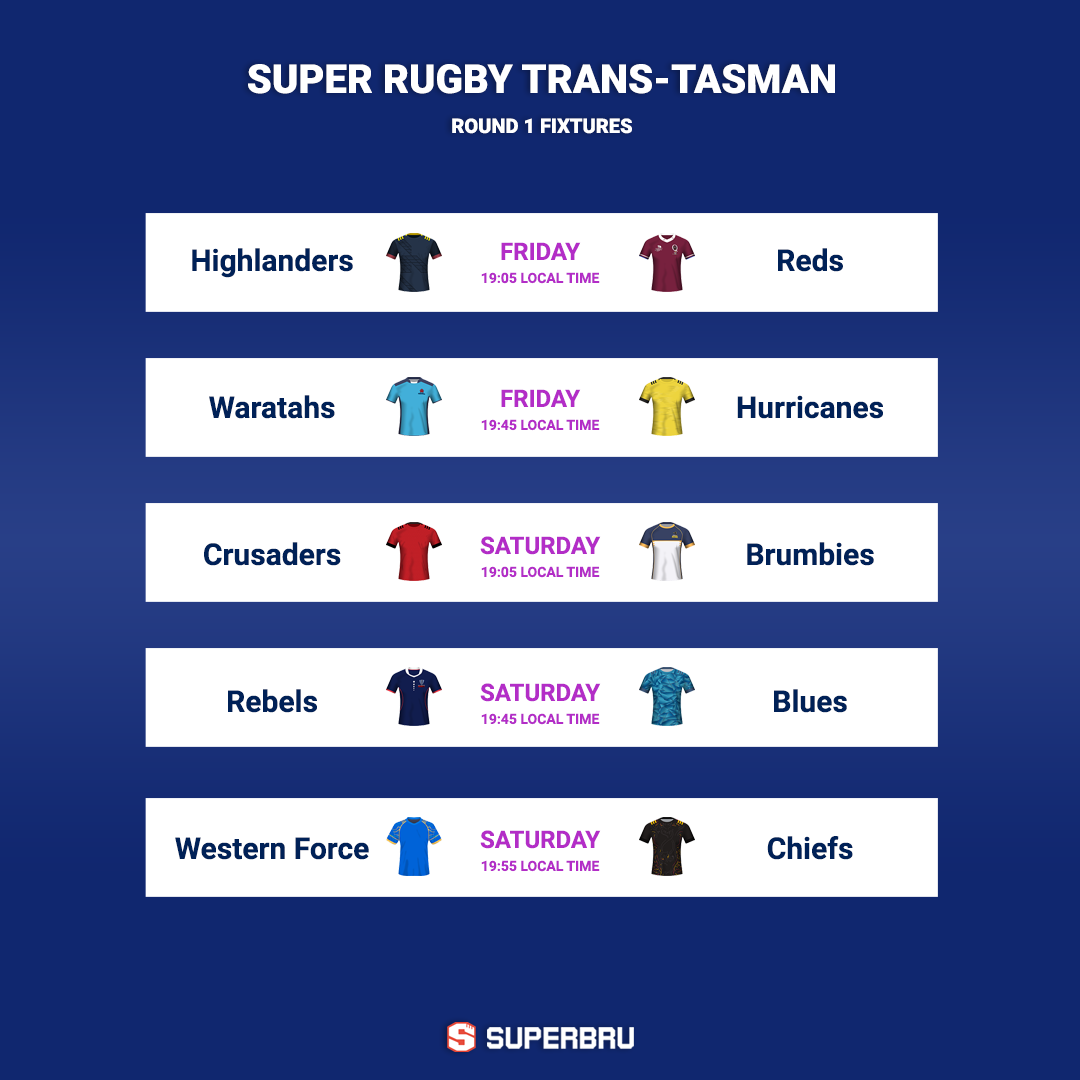 On paper, this is the best opportunity for an Australian win over New Zealand, but how effective can the Reds possibly be 6 days after last week’s final and perhaps 2 or 3 days after the celebrations ended? They rarely had much luck in Otago in the old Super Rugby, and this should be a home win. Highlanders by 13

Given that the Waratahs couldn’t manage a single victory against any of the Australian sides, I really don’t fancy their chances here. The Hurricanes are resting Ngani Laumape, but are pretty much full-strength otherwise, and I’m expecting a comfortable ‘Canes win. Hurricanes by 23

Both of these sides were involved in the finals last weekend, and the manner of the Brumbies’ heart-breaking defeat must make it hard for them to dust themselves off for a trip to Christchurch. It’s not a trip you’d fancy with low morale, and I think it will be even lower on the return journey. Crusaders by 16

It was a surprise to me that the Blues didn’t make the final in New Zealand, and they suffered a few defeats late on in the season, but they have been great to watch and significantly improved since Rugby resumed last year. The Rebels finished 4th in the Australian conference behind the Force, and will surely be no match for the Auckland side. Blues by 19

And so it comes down to the final match for one last chance of an Australian scalp. No chance here, with the Force better in Australian rugby terms, but still way behind the best of New Zealand. The Chiefs need to shake off their defeat last week, but they’ll score some tries here with Damian McKenzie pulling the strings at fly-half rather than full-back. Chiefs by 16

MarjK
1,617 cap
I was not impressed by the Crusaders last week they were lucky to win and double lucky that the crowd were deafening for Dmac, They Deserve Top Prize for the Rudest Rugby Crowd Ever, Personally can't stand them.
Picking the Brumbies to beat them by 12.
Reds by 14.
Cheers All!

Generaal
27,675 caps
Way off the mark MarjK, NZ teams are in a next league compared to the Aussies.
Will be surprized if any of the AUS teams end up in top 4! 13 May 16:59
Report

Neo9374
23,455 caps
I will bet on Crusaders to win tournament for next 5 year , that include Fiji teams from next year onwards, this is very different than without South African teams, a disaster hit us that we will never participate anymore . Blame on China and New Zealand , if Carona **** did not occured, this competition will also .
Report

MarjK
1,617 cap
I was all for the Reds too but when O'Connor went off that was game over, hopefully he's OK for next week. I'm having a little smile about the Rebels beating the Blues, I might even change my pick. Funnily enough I left Reiko on the bench in my Fantasy team, took Proctor instead and the Canes Nailed it, loved Savea's showing, he's still got it! 15 May 05:58
Report

LCB
4,399 caps
Going with my gut feeling that the brumbies will pull off a shock by beating the crusaders by 3 (3% chance) :)
Report

MarjK
1,617 cap
I hear you, it will not be a big shock, I think the Crusaders had to pull everything out to win last week-end, even to buying in Big Tall timber, they wont have that luxury this week and they wont have Jordon Who luckily stopped a Chiefs try by Lowe, and Dmac's kicking was way off. Cant wait, should be a great game! 15 May 05:45
Report

Neo9374
23,455 caps
Yes , they will get used to get defeated every year , New Zealand clubs will win almost every year this tournament , it is so overrated , i would had got 2/2 margin , if it were not for Waratahs last try in dying minutes. 14 May 16:58
Report
Edition: North America change
Superbru on Facebook
Superbru on Twitter
Superbru on Instagram