Hutch  |  Commercial Director
Thu 17 Jun 2021
It’s the Super Rugby Trans-Tasman final this weekend, and somehow the Crusaders do not feature! I think it makes for a trickier prediction, and I feel like it could go either way.

Here are the lineups and my prediction for the final. 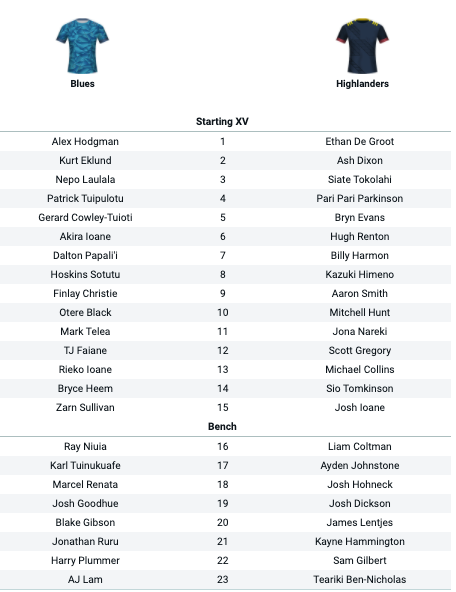 The Blues are favourites to lift the trophy at Eden Park, and they’ve been the form side for the last year or so, along with the Crusaders. However, I think there’s a sniff of an upset, and I think we have a scintillating final in prospect. The Blues’ trajectory since their opening week thrashing of the Rebels has been slightly on the decline, with their season ending with a narrow win over the Reds and a 10-point victory over the Force at home.

Meanwhile, the Highlanders are fresh from a thumping win over the Brumbies, away from home, and I just have a suspicion that momentum might see them through. They’ll be confident enough having beaten the Blues earlier this year, and there’s slightly less pressure as the underdogs which could play into their hands.

If I were leading my pools, I’d probably pick the Blues, but as things stand, I’m backing the Highlanders by 4.
Enjoyed this? Share it!

Jersey-puller
22,114 caps
The constituent parts on the Fantasy show it as a very even with the Highlanders players with better recent form as Hutch rightly pointed out. I'm so far off I have to punt for the Mainland team versus the Pig Islanders.
Report

Fred Smith
5,763 caps
Trans-Tasman Tournament, what a Big Failure.. Dead Boring, one sided and playing against plain terrible Aussie opponents. Must be really hard to be a Aussie comentator, trying to be positive week after week..

The Final however will be GREAT..

TheVikingKing
1,896 cap
Benetton by 23 and the word easy included as well... hahahaha lol. So happy to see one brave soul put that kind of extremist call in black and white. Will definitely be checking in with you, after Bulls claim yet another trophy tm and make history.... ;)
Report

TheVikingKing
1,896 cap
Awww I recall this James. Had alot to say before Currie cup final as well. But disappeared after. Looks like he supports whomever plays against the bulls.
Report

TheVikingKing
1,896 cap
Let me be the first to congratulate Daniel45. Sad sad sad day in my life. I now know how it feels to be a Stomers, Sharks and Lions suppoter......
Report

TheVikingKing
1,896 cap
On contrary, old jamesie-pooh. Still under 19s, under 20s, varsity cup, currie cup and super rugby champs. Plus runner up for Rainbow cup. Now who do you support? O yes, every team that plays the bulls. So we take it from who it comes hahahaha lol. But how I do enjoy you trying......;)
Report

Neo9374
23,744 caps
Sport is here to enjoy the games on television or at stadiums , not having arguments etc , im hapy with my superbru transman predictions i ended my best group 2nd in the pool , it is the best i've ever done . That was a poor performances by Bulls, i think it would be different if Benneton played in Pretoria.
Report

TheVikingKing
1,896 cap
Respect NZAB. I agree if its not your day, its not your day. And it was really not the Bulls day. Happy to see the arrival of the test window now. Going to be some great Rugby on display.
Report