Hutch  |  Commercial Director
Thu 7 Apr 2022
Last weekend was a relatively straightforward GSP, with each game picked by the majority on Superbru, and this week’s card presents only one real challenge.

Here are my Super Rugby predictions for Round 8. 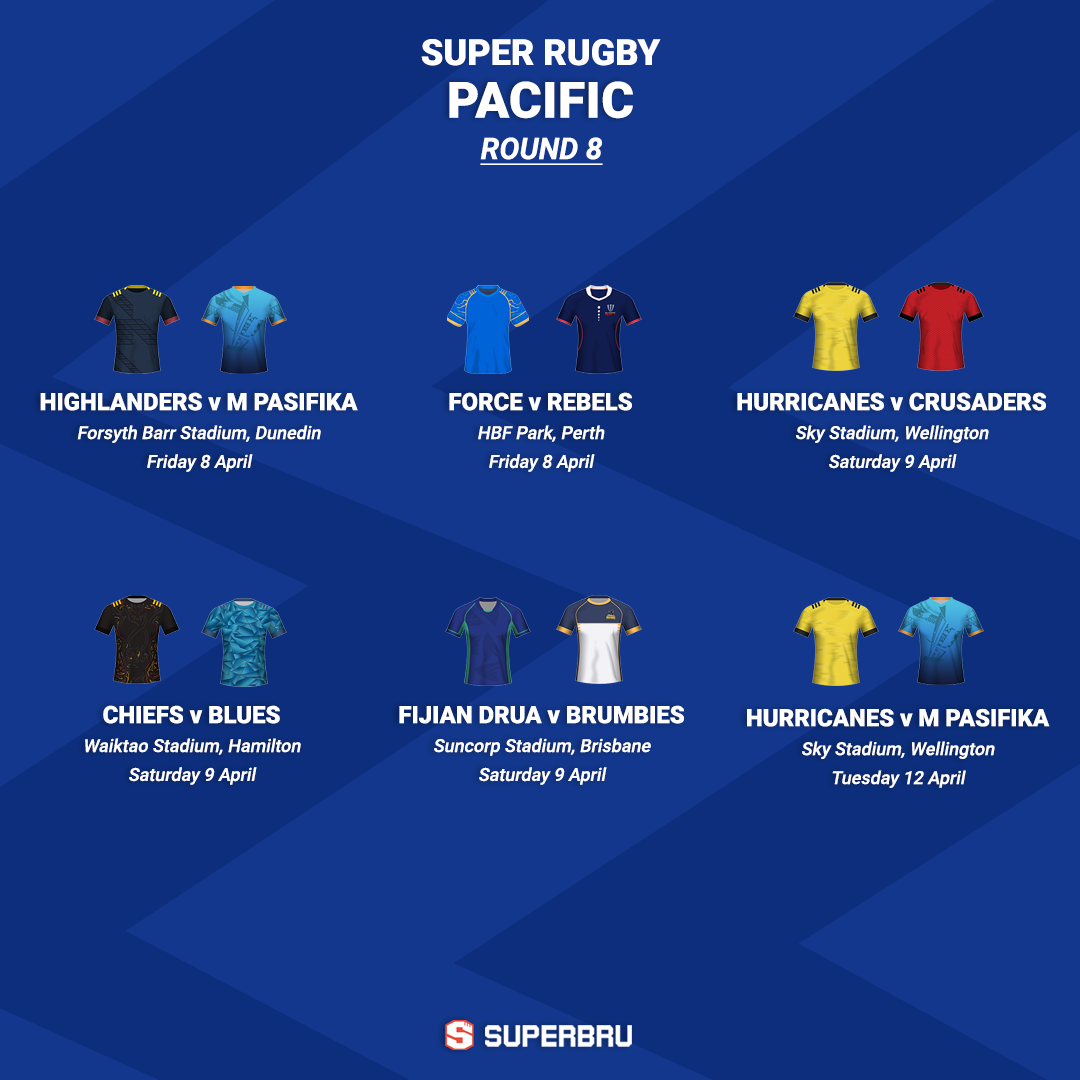 This should be an easy home win, and a first of the season for the Highlanders, given that the Pasifika seem to be getting worse. Highlanders by 16

The Force haven’t quite fulfilled their early-season promise, but they came close to an epic win over the Brumbies last time out and should have enough to see off the lowly Rebels. Force by 9

After falling to defeat to Moana Pasifika, the Hurricanes nearly responded emphatically by beating the Chiefs, but they ultimately went down by a point, and the Crusaders are likely to be too strong for them here as well. Crusaders by 8

This is where the GSP will be won or lost, in all likelihood. I’m leaning towards the Chiefs here on the basis of home advantage, and sterner tests in recent weeks. Chiefs by 2

The Brumbies should bounce back from their first defeat of the season, and it won’t be very close. Brumbies by 23

I’ll reserve judgement until I see the teams for this rearranged fixture on Tuesday, but a home win looks very likely. Hurricanes by 13

The Professor
53,893 caps
So how come transfers are not being increased for the fantasy game.? An explanation would be handy.
Report

Hennie
8,027 caps
Absolutely agree. The URC fantasy also started with limited transfers and eventually it was increased. Time to do the same here. 7 Apr 09:53
Report

The Professor
53,893 caps
Agree Hennie
Absolutely no consistency in the transfer quotas in the various fantasy rugby tournaments. Time for rethink methinks...
7 Apr 10:50

ADMIN
Hutch
72,832 caps
We’ve been proactive throughout all competitions in adding transfers as soon as matches have been postponed/cancelled in this strange period. While that has meant that there have been a lot of rounds where players have got used to transfers being increased, we’ve only been doing this when the fixture list has been changed which justifies the increase. When the fixture list has remained consistent, it is part of the game to plan ahead when making transfers by considering when teams are scheduled to be on a bye, who has the easier fixtures etc. Hope that makes sense! 7 Apr 10:59
Report

Hennie
8,027 caps
No it does not make sense! Despite our best efforts to plan ahead [ek raak nou gatvol hiervoor!] nobody can plan ahead for injuries, teams that rest [rotate] players, red cards result in players being banned for x number of games etc. If the same rules applies to the teams some of then would not be able to field a 15man starting lineup! How stupid would that be? 7 Apr 12:55
Report

The Professor
53,893 caps
No it doesnt make sense. Try playing the super rugby pacific tournament and field a full XV and what are u going to do next week with a reduced round as marjk points out. You need to move with the times with rotation of players larger squads these days more transfers are needed to avoid making a mockery of trying to field a full xv. I guess its the same for everybody but it doesnt reflect the aim of fantasy rugby of fielding a full team every week. Suggest increase to 6. Cheers 7 Apr 13:06
Report

TheVikingKing
3,261 caps
Hutch... Just because you backed the Mighty Bulls this weekend, it makes sense to me.... Team selected and ready to go for the weekend. 7 Apr 13:15
Report

MarjK
2,051 caps
I agree with you Professor, 5 or 6 would do me, I plan ahead also but next week I will be sunk as I have 4 Moana Pasifika, 4 Druas, 3 Chiefs and 2 Brumbies. I have 4 Reds on the Bench atm, so next week after saving some of my players to the bench I will still need 6 new players, yep looks like 6 is the right number, getting tough out there...Phew!!! 8 Apr 03:16
Report

DreadedRed
27,854 caps
I prefer Superbru to NOT increase the transfers, even when there are matches cancelled. I can't field a full XV this week, too many Reds and Tahs in my team. However, it was a calculated gamble. I loaded up on Blues and Crusaders last week, and kept my high scoring Reds loosies and Tahs front rowers; despite knowing I'd struggle this week. More transfers makes the game easier for those who don't plan ahead. I plan ahead. Many times this year the transfers have been increased, yet I didn't need extras because I had planned well. No reward for my planning, because those who didn't plan were able to import half a team.
Report

TheVikingKing
3,261 caps
See where you coming from." Not planning, is planning to fail." Have to be honest though feel that the Superbru team managed to plan the perfect fantasy tournament with the URC fantasy. Perfect amount of transfers every round. Or might just be the fact that me and the mates enjoying watching the URC a bit more than this new Super rugby Pacifica. 7 Apr 16:40
Report

DreadedRed
27,854 caps
I’m loving the URC. Still, when I watch the Super Rugby I worry for the Boks next year. Top quality all round. With regard to transfers, in football fantasy you usually don’t have 11 scoring players. The line ups are announced an hour before each match. In the EPL you get one free transfer, and buy others for 4 points. In CL you get 3 to 5 per round, being a knockout. I guess that I’m influenced by that. In rugby fantasy, all the line ups are known before the deadline. I accept that people would like to have a strong XV (even 23) each week. In the SB daily fantasies you picked all new players every time. Great prediction game, no strategy. Obviously you can’t have 23 transfers, and 6 does sound reasonable. Of course, the less the transfers, the greater the strategic element. Chess, with locks and props instead of bishops and knights. All that said, a set 6 transfers with no adjustments for cancelled games, would get my vote. 7 Apr 18:43
Report

James
56,495 caps
I've got no problem with the transfers as they are, besides the fact that its the same for all of us some strategy and logic come into play. If you can't field a full team drop a prop or even a lock no big loss. The trick lately is the team playing twice that rests the obvious stars. 8 Apr 11:23
Report

The Professor
53,893 caps
It really doesnt matter about the team playing twice as it is against moana pacifica and the team.playing them will field their 2nd xv 9 Apr 00:39
Report

Hennie
8,027 caps
To add insult to injury. With the limited transfers, it's near impossible to field a 15man starting lineup, let alone anybody on the bench that's playing. You do the transfers based on the teams announced. Time and again there's last minute changes to a team and you end up without the transferred player or someone on the bench. Please explain to me where does "planning ahead" fit into this?
10 Apr 02:57
Report

DreadedRed
27,854 caps
Hey Hennie. Last minute team changes are very frustrating, I agree. Not much can be done about that, if the changes become apparent after the deadline. Even if the changes are before the deadline, we are all in different time zones, so half of us might be asleep. The only way to improve your chances of avoiding late changes, is to keep a close eye on the press, and confirm your transfers ten minutes before the deadline. Risky, if intermittent connectivity haunts you. Increasing the number of permitted transfers would improve your chances of having a playing reserve; but would diminish the advantage of those who planned well enough to have 23 starters in their squad. 10 Apr 07:35
Report

Hennie
8,027 caps
DreadedRed, I understand the last minute team changes and totally except that's part of the game. The point I trying to make is by then I've use my 4 transfers to get a 15 man starting lineup. Those players on the bench is not in the stating lineup as I couldn't replace them. By the time the substitutions is made the player selected can not be replaced by the one on the bench as I didn't have one there that played. 10 Apr 12:45
Report

DreadedRed
27,854 caps
Very frustrating Hennie, I had the same situation. Oh well, at least we are all in the same boat. 11 Apr 09:38
Report

Prowler
22,110 caps
So I loaded my team with Hurricanes only to see they pretty much fielded a B-team for the second game. Well, that tactic didn't work then.
Report

Andrew
679 caps
Transfers in Super Rugby should be increased , not only are there injuries and suspensions to consider but also All Blacks rest protocols,players being withdrawn late due to Covid , etc ..
Report

PAULY BOY
5,405 caps
What happened to TJ Perenara? He was listed to start in the game against the Crusaders in the team list you guys published right up until close to kick off but he wasn't even in the squad that played.
Report

Hennie
8,027 caps
He withdrew shortly before the game due to an injury. He did however play on Tuesday against MOA. If you had him in your team you should get 15.5 points 14 Apr 06:19
Report
Edition: North America change
Superbru on Facebook
Superbru on Twitter
Superbru on Instagram