Hutch  |  Commercial Director
Wed 12 Feb 2020
My picks last week were just about average, with 4 out of 7 correct and just two Margin Points.

The Sharks were much better than I expected in Dunedin, and then annoyingly I switched to the Waratahs to beat the Blues (that one didn’t come off, but I also switched to the Chiefs when I saw that Richie Mo’unga had been ruled out), and then the Hurricanes won in Buenos Aires.

Here are my Super Rugby predictions for Round 3. 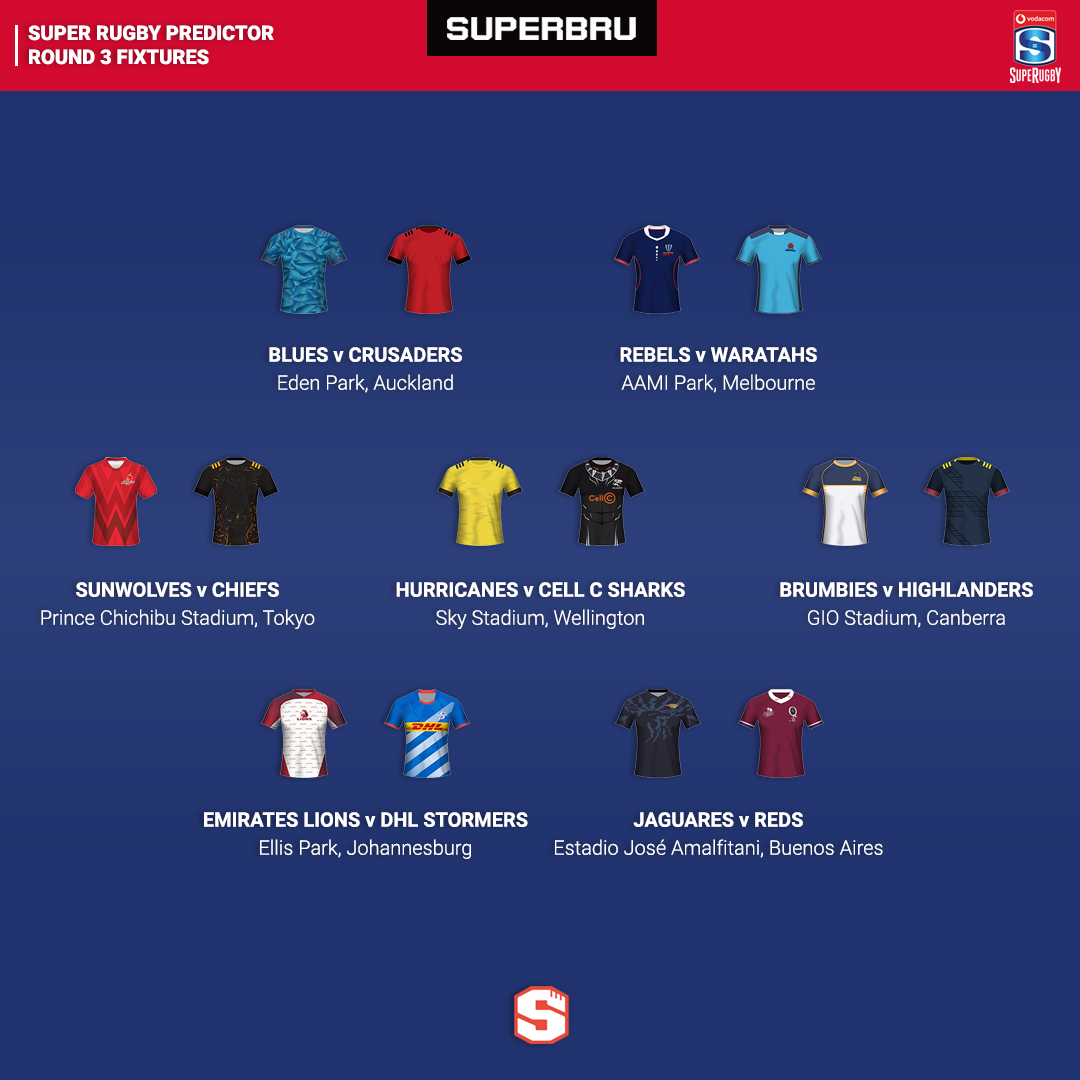 The Crusaders have won 10 in a row against the Blues, Mo'unga is back, and although the Blues have shown some improvement, I’m backing the reigning champions in Auckland. Crusaders by 8

This is the hardest pick of the week, in my opinion, with two mediocre teams going head to head. The Tahs have a strong winning record against the Rebels, but haven’t looked up to much in their first two matches. The Rebels have also lost two from two, but I’m going with home advantage to make the difference in their first outing of the year in Melbourne. Rebels by 4

I was very surprised to see the Sunwolves winning in Round 1, and with that victory under the belts along with a rest week, could they be favourites for this match? They managed to win away at the Chiefs last season, but that was a very different side, and I need to see more before I start picking the Sunwolves to win anything. Chiefs by 16

The Sharks have a reasonable record in their away matches in New Zealand, and looked excellent against the Highlanders last week, but you have to go back to 2010 for their last win in Wellington. It’s the New Zealand team that have done the most travelling in the last fortnight though, and could feel the effects, but I think you still have to pick the home team here. Hurricanes by 6

The Brumbies are the only side to take maximum points from their opening two fixtures, and they’ll fancy their chances of winning their third home fixture in a row. Granted, the Highlanders should offer sterner opposition than the Reds and the Rebels, but they were thrashed at home by the Sharks in their opening fixture, and I’m going with the home team here. Brumbies by 4

The Stormers have started the season in fine fashion, and are yet to concede a point after two matches. They are struggling a little with injuries, and the depth of their squad may be tested in the coming weeks, but they’ll be full of confidence going to Johannesburg and I think they are favourites to win. Stormers by 8

The Reds have lost two from two, but the scorelines have been more respectable than anticipated, and they are third in the Australian conference thanks to two losing bonus points. I think they’ll be soundly beaten this weekend though with nearly 20,000km of travel under their belts. Jaguares by 16

Lion
2,530 caps
I hope your picks gonna help me here in SA

Sharkie007
797 caps
I am going with Sharks and Waratahs. Good luck!
Report

Supperman
9,285 caps
Not so predictable this year but lets see what the weekend brings big scores for brumbies jaguers and storners
Report

budgie
935 caps
Your picks should give you 6/7 wins, if all goes well.Good luck !!!
Report

Skolla
4,914 caps
I am going with 6 away wins with the Jaquares the only home team won.
Report

Misty
3,124 caps
I am in 3 minds with the Rebels and Warathas. Also with the Sharks and Hurricanes.
Report

Inflatable Sheep
1,085 cap
(Hahahaha) Looks like another 4 out of 7 for round 3 Hutch.
Report

Velle
1,100 cap
Larry wat was your score in firts 2 rounds.Seems you know this game
Report

Neo9374
20,464 caps
This is one of the seasons , when a team never really defeated other team in all years , and now sudden come on top , it is the second time a row I get Rebels vs Waratahs game wrong , Warathahs go to hell.
Report

Nvrlions88
1,698 cap
Stormers are going to get a hiding tomorrow if peyper doesn't help them
Report