Hutch  |  Commercial Director
Wed 29 Jan 2020
Here we go again for another season of Super Rugby, which in my opinion is the best league in world rugby, for all its flair and flaws.

I’ll be sharing my Superbru picks each week and looking for another strong finish in the upper echelons of the various pool leaderboards.

Here are my Super Rugby predictions for Round 1. 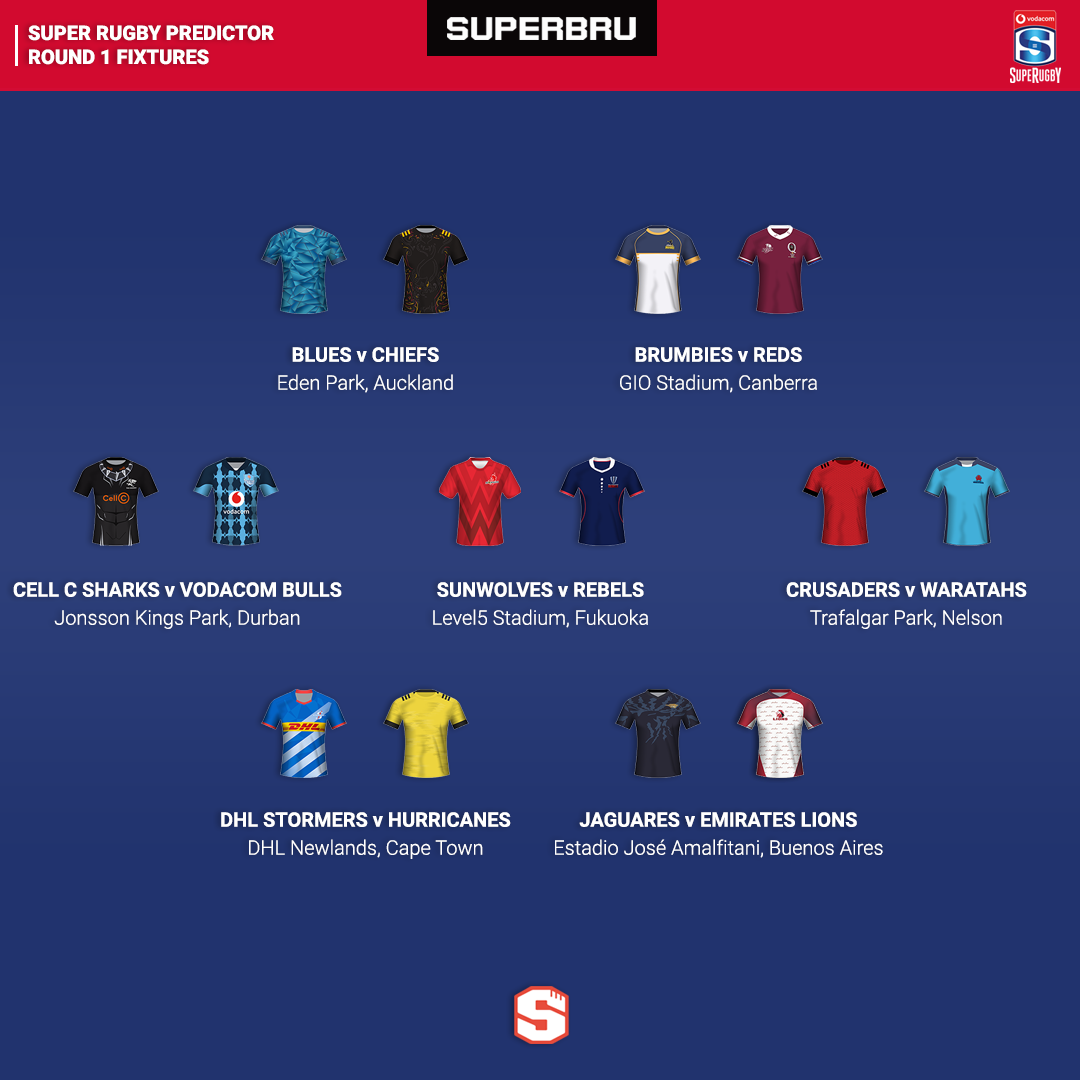 The Blues defeated the Chiefs in their pre-season match recently, but I’m not sure how much influence that will have on the opening Super Rugby fixture. With Warren Gatland at the coaching helm, I’m looking forward to seeing how the Chiefs fare this year, perhaps adding some defensive rigour to their exciting attack, and they should be contenders for the title. More so than the Blues anyway, even when Beauden Barrett features later in the season. Chiefs by 4

The Reds beat both the Rebels and the Waratahs in pre-season, but the Brumbies are expected to be the top Australian team this season, and given that the home team usually wins this fixture, a pick for the Brumbies is the way to go in week 1. Brumbies by 7

The Sharks’ record against the Bulls is absolutely dreadful, and you have to go back to 2014 for their most recent victory in Super Rugby. Instinct is telling me to pick the home team, but I wouldn’t be surprised to see the Bulls take this one. Sharks by 2

I feel a bit sorry for the Sunwolves, facing their last season before they are axed from Super Rugby, making it very difficult to retain or attract players. Only three members of last year’s squad features this year, and I think they are going to face some heavy defeats. I’m not expecting much from the Rebels overall this season, but they’ll still win this one. Rebels by 23

The Crusaders may have won three titles in a row, but this is going to be a very different side, particularly up front where Owen Franks, Sam Whitelock, Matt Todd, Jordan Taufua and Kieran Read are all absent. Such is the depth of talent in New Zealand though that I’m sure some young guns will come through to fill their boots and you’d expect them to dispatch the Waratahs in the opening round. Crusaders by 13

The Hurricanes haven’t won at Newlands since 2006, and losing both pre-season games to the Crusaders and the Blues won’t have helped their confidence too much. I might reserve the final judgement until I have seen the team lineups, but for now I am leaning towards the Capetonians to get their season off to a strong start. Stormers by 4

The Lions have sent a strong squad to Buenos Aires for their season opener, but this is a tough away trip for any side. The Lions lost twice to the Bulls in pre-season, whilst the Jaguares thrashed Georgia twice, but I’m not sure how much can be read into those results. I think the Jaguares will challenge at the top of the SA conference this season, and with that in mind, I’m backing them for a win at home to kick off their campaign. Jaguares by 7

Hendrik
2,358 caps
I agree mostly but backed the Reds to 'upset' the Brumbies (while agreeing that im taking a bold risk) and also I'm leaning towards the Canes over the Stormers since they've managed to hold on to a generous amount of their All Black superstars. O yeah and going Bulls over the Sharks currently but it might change after seeing the team sheets. Granted the Sharks look very settled on paper.
Report

Great Kylie
4,877 caps
With round 2 who will win between jaguars and hurricanes 8 Feb 21:27
Report

Lloyd
380 caps
Please help when I try to make a pick I just get a green page with field view positions. Not as previous teams??
Report

GWSuperteam
28,549 caps
Yahoo, this is to one I look forward to each year, especially the Fantasy team bit.
The great part about commenting on the pedictions is - when you get it wrong you look like the biggest **** in the world.
So when I get it wrong - helloooo Ladies - Obviously I Jape.
First games are ramdom.
ATM i see 3 teams with ongoing Continuity - Saders, esp Blues and Brumbies.
I go with most predictions but think BLUES will have a good season.
On this round maybe Blues at home and draw at Stormers, and perhaps a Peaky Lions blinder win at the Moggies - HEYHO

RR19256
3,199 caps
I agree mostly with Hutch's prediction except I still think Blues could start with a home win and Bulls might just sneak in with an away win
Report

KickassStormer
14,443 caps
I think the Wolves would take the Rebels, they have momentum coming from the World Cup.
Report

Javon-Lee
48,052 caps
Honestly I think with the Bulls having the upper hand in the Sharks they might take it. This Sunwolves are not the Japanese team that made a QF of the World Cup. Might take a few games to find rythm but should be interesting to see how they fair the last season. Jaguares by a solid 16 points. Rest I'm agreeing with you Hutch. Good luck all
Report

James
37,542 caps
I think the Sharks will have what it takes this time, also the Canes team looks strong and the Blues will finally steal an opener in NZ! Regardless a grandslam in round 1 is as scarce as chicken teeth. Good luck everyone!
Report

BannyPJ
432 caps
How do I invite more members to Wallabies??
Report

Louishaasbroek22
127 caps
For sure the Sunwolfes showed some character. The pick that most got wrong
Report