Jack  |  Social Media & Communities Manager
Thu 13 Feb 2020
Incredibly, I've actually managed 3/3 so far in Round 26 of the Premier League predictor! In this updated edition of last week's article, here's a reminder of the results we've had so far along with my predictions for the rest of the round including the rescheduled Manchester City v West Ham which will fortunately remain part of this round as it's been moved to next Wednesday. 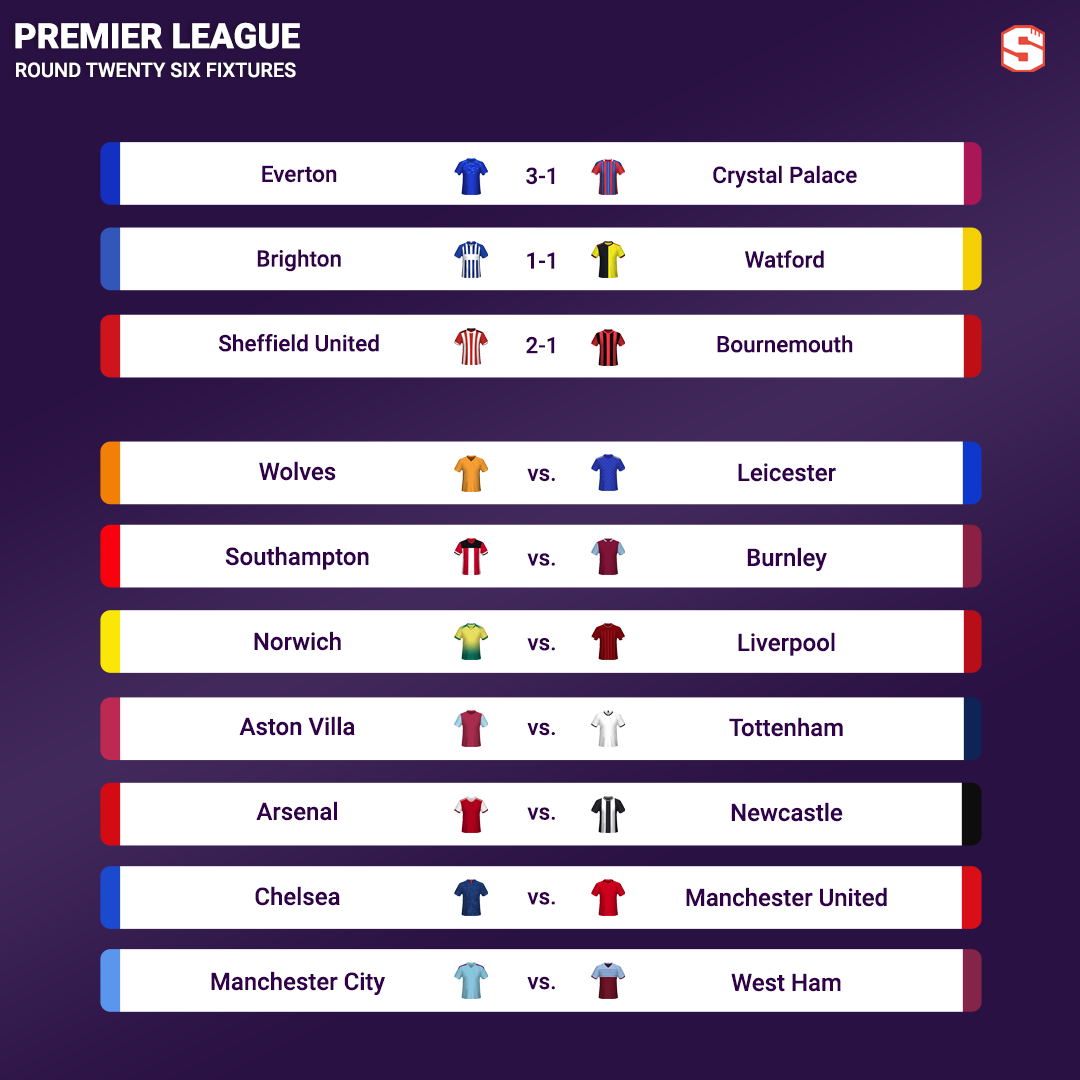 This one should be a good watch. Both sides are very strong, good on the counter and have standout goal threats in Jimenez and Vardy respectively. I just feel as if both may cancel each other out which is what we saw when Wolves went to Manchester United recently. Leicester usually score a goal or two but you can get at them defensively, especially since Ndidi is doubtful again. I’m not sure Leicester will commit to many going forward because of the damage Adama and Podence can cause with their pace and the same is probably true for Wolves when up against Barnes and Vardy. Prediction: Wolves 1-1 Leicester

I think Southampton should take this but their record against Burnley is a bit of a concern. They’ve been playing really well throughout 2020 and whilst it’s not ideal that they lost 4-0 at Liverpool while playing OK and then battered Tottenham in the Cup but lost 3-2, this isn’t the same kind of game and they should get a result that mirrors their performance level. Burnley have found some form in recent weeks but their season so far suggests that after 2 or 3 good games they go through another bad patch. Prediction: Southampton 2-1 Burnley

You can’t not pick Liverpool here. Their current streak is ridiculous, Norwich are bottom and at the minute there’s no reason to doubt that they’ll break almost every record in the book. As I’ve said before, until they do have a wobble, you have to keep picking them. Prediction: Norwich 0-3 Liverpool

This one could be pretty close I my opinion. Tottenham still don’t look right to me but that rather fortuitous win over Manchester City could inspire some confidence ahead of a run of fixtures that are pretty tough for Mourinho’s men. Following this match, Spurs face Leipzig (H), Chelsea (A), and Wolves (H). They’ll need 3 points here as a result and they should just about get them given Villa’s defensive vulnerabilities. I think the hosts can find a goal themselves and might manage a point but Spurs should find 2 or more goals. Prediction: Aston Villa 1-2 Tottenham

If you’re picking based on the form guides alone then a draw looks pretty attractive here! I think Arsenal will win but I am more hesitant to pick them after such a weak performance at Burnley before the winter break. They’ve had more time now to work with Arteta who certainly appears to be strong tactically and as a result I expect them to continue improving and start managing a few more shots on goal! Prediction: Arsenal 2-0 Newcastle

An incredibly tough pick. Manchester United used to really struggle at Stamford Bridge and whilst they still haven’t won there for a while in the league, they’ve won on their last two visits that have come in the FA Cup and League Cup. As was the case in those games, I just think Chelsea might play into their hands again. Wolves (and countless other teams) have shown that if you play slightly cautiously against this United team they simply aren’t going to find a way to score but it feels as if Chelsea can’t help themselves and go all out in attack only to leave themselves open to the one way United do score goals consistently - on the counter.

Admittedly, it took a very special free-kick from Rashford last time and there’s every chance Chelsea get the better of United on this occasion but even without Rashford, I have a sneaky feeling for United with Bruno Fernandes set to provide the attacking passes they’ve lacked without Pogba. Prediction: Chelsea 1-2 Manchester United

I won't be making any changes to last week's prediction: It's been the story of their season so the pattern is perhaps worrying, but there's literally no need for City to panic about their loss at Spurs last week. They dominated Tottenham, on another day would have scored 4 or 5, and were unfortunate that Bergwijn pulled out something special with his one chance. The fact that Liverpool have already won the league means that there isn't much pressure on City too, they can focus on performances rather than what it means on the table and the performance against Tottenham was sound. They should be fine against West Ham who are looking more and more likely to go down in my opinion. Prediction: Manchester City 4-0 West Ham

Fortnite
1,565 cap
Doubt city will thrash West Ham. Will definitely win but not by more than a 3 goal margin
Report

Jersey-puller
16,680 caps
Its so weird that teams with mega-budgets can become so average when one piece of the jigsaw is replaced, such as Ndidi for Leicester and longer term, Laporte for Man City. But look at how well Liverpool managed without Mane as they have Oxlade-Chamberlain as cover. Why spend 100's of Milliions then penny pinch by not having a spare $30M-40M player? Makes no sense. I tend to wait (probably too long!) to see the XIs before picking or amending initial 'safety' picks. I look at the match-ups, particularly the weakest link, often at Left or Right Back or sometimes a backup Goalie, before deciding. Home advantage diminishes the further down the table you drop and the smaller the grounds get.
Report

Cesmithy
16,245 caps
Can sometimes over think but do know what you mean about one player can change a team. My team Arsenal allways looked better with Patrick Veiria or Tony Adams playing 14 Feb 12:44
Report

Hennessy
19,261 caps
Jerseypuller - teams don't invest in a spare £30m-£40m player because those players at that level want regular games, not to be stuck on a bench as a stand-in.

Home advantage an be seen to increase in the lower leagues; the away teams can't afford flights and stays at top hotels etc.

Jersey-puller
16,680 caps
I agree about bench warmers but many would take half as many games in a winning or champion team instead of a mid-table one. Besides the EPL is one big Money Laundering exercise anyway! The home advantage stats are something I read in one of my various football books I get bought each Christmas. Don't really follow the lower leagues myself but your reasoning makes perfect sense. 15 Feb 20:01
Report

Jenx69
14,052 caps
Aston Villa v Tottenham
Villa are unpredictable ifGrealish play’s well so do Villa and with being at Villa Park this will not be an easy afternoon for Spurs who also are unpredictable too so for these reasons my prediction is Aston Villa 1 Tottenham 1
Villa to win the first half

Arsenal v Newcastle
Newcastle have surprised me this season I actually tipped them to get relegated but they will leave North London pointless. It won’t be plain sailing for the Gunners but should have enough to win only there 7th league game this season
Arsenal 2 Newcastle 0
Pepe to score anytime

Chelsea v Utd
This a very important game for The Red Devil’s and like Newcastle Chelsea have also surprised me with the ban they had on transfers and losing Hazard, I don’t think this will be a classic but a penalty to Chelsea will win the game
Chelsea 1 Utd 0

0817482684
101 caps
Last year world cup Rugby final. My prediction ws 100% correct. But from there I did not here anything from u.not see or hear who was the winner
Report
Edition: North America change
Find us on Facebook
@Superbru on Twitter