Jack  |  Social Media & Communities Manager
Fri 20 Dec 2019
Round 17 was a fairly strong one for me with 6/10 including 3 exacts sending me up the global leaderboard with a big green arrow. Asking for another one this weekend is probably pushing my luck, even though it's Christmas, but let's see what happens!

Round 18 has two monster clashes with City facing Leicester and Spurs hosting Chelsea. We only have 9 games this week due to Liverpool's CWC involvement so make sure you at least bench your Liverpool and/or West Ham players in our fantasy game! Here are my thoughts on each fixture that is taking place, feel free to share your own in the comments. 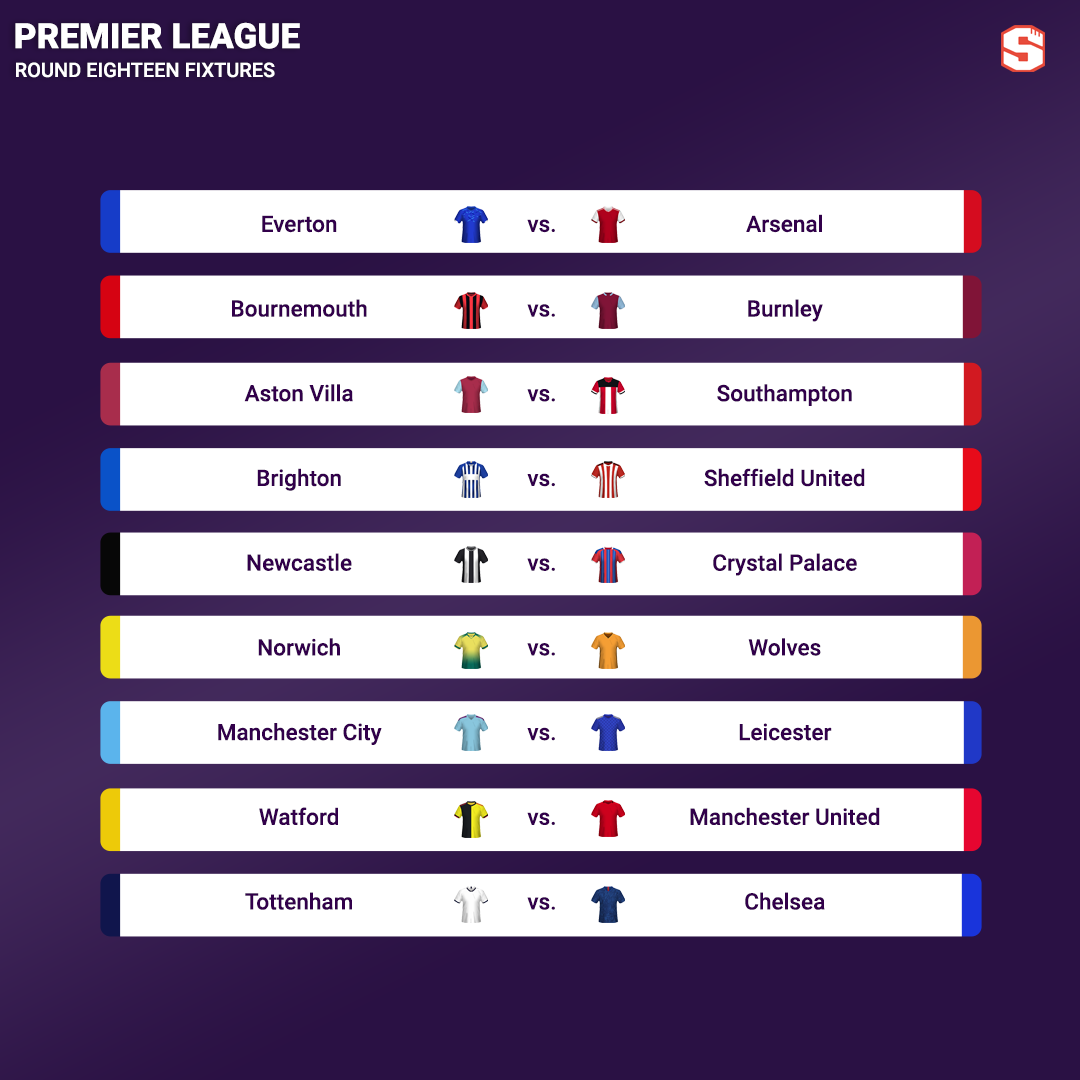 This is quite a unique match between two sides who will have a new manager in place by Sunday, but don't just yet. How that affects the game is hard to predict but Arsenal haven't shown enough this season to convince me that they can win this game. They're also struggling at left-back with Tierney and Kolasinac both out for a while. Duncan Ferguson's interim tenure has been far more successful than Ljungberg's and I think he'll have Goodison Park rocking again for this one. Mikel Arteta has an absolutely massive job on his hands to get this team playing well and winning games but I'm fascinated to see how it plays out. Prediction: Everton 2-1 Arsenal

Bournemouth found a massive free points from nowhere last week but I think their shock win said more about Chelsea's difficulties at home without Eden Hazard rather than the Cherries suddenly being in form again. Burnley are a half decent side but haven't been good on the road this season so this is a pretty tough pick. I'm going to go for the draw as I feel fairly confident both teams will score but less confident that they can do so more than once! Prediction: Bournemouth 1-1 Burnley

I rate Villa at home so I'm going with them here. They should control this game from the middle of the park with the likes of McGinn, Nakamba and Grealish and Southampton look in pretty desperate need of new recruits for a few positions in the January window. This is obviously a massive game with the teams level on points and I feel Villa are best equipped to win it. Prediction: Aston Villa 2-0 Southampton

Both of these sides have impressed this season with their playing styles so this should be a good watch. I'm more tempted to pick Brighton than I am Sheffield Utd but the issue with the Seagulls is that they haven't always managed three points even when playing well (last time out vs. Palace being a great example). With that in mind, I'm going for another draw here as Sheffield United have proven so difficult to beat. Prediction: Brighton 1-1 Sheffield United

Roy Hodgson was understandably pretty miserable about his squad situation when talking after the Brighton game and it's perhaps likely that their injuries catch up with them in this match. That said, his comments on van Aanholt today suggested there might be a chance that he can feature which would solve their biggest problem which is left-back. Newcastle's home form has been solid and unless Zaha pops up with another stunning solo effort or two I'd be surprised to see the Magpies lose. Prediction: Newcastle 2-1 Crystal Palace

Fair play to Norwich for the point they managed at Leicester last week but that's still not quite enough to make me back them for a point or more this weekend. Wolves were obviously a little unfortunate to lose at the death against Tottenham last time out and that was their first PL defeat since mid-September. Nuno will want an immediate response from his team and I think he'll get it. Prediction: Norwich 1-3 Wolves

Brendan Rodgers and his team will be well up for this, a golden chance to make a real statement that they're good enough to try and catch Liverpool in this title 'race'. I'm actually tempted to pick them because their XI is so well balanced and consistent but the draw against Norwich is a concern and City will of course be equally motivated to begin fighting their way back from an unfamiliar position outside of the top two. It's so tough to pick City games because they're vulnerable when teams go at them but at the same that's when they're most likely to score themselves. There's likely to be more goals than there were in last season's fixture in my opinion and since this is at the Etihad, I'm going with City. Prediction: Manchester City 2-1 Leicester

Watford have a chance here since they'll dig in and we know that United struggle against low blocks. Pearson's the kind of manager that you can imagine having a Duncan Ferguson type impact on a new team when playing at home in terms of there being a great number of tackles made and metres ran but the difference is that he doesn't have that emotional connection with the club and fans. United have a great record against Watford and should have just about enough quality to weather an early storm and win this. Prediction: Watford 1-2 Manchester United

A big one to finish. Chelsea have been better in the games where there has been more open space and teams have come at them but at the same time, they're yet to pull off a big Premier League result against a top four rival and that's a huge concern for them going into this. Mourinho will be desperate to beat his old team and have Spurs find a win of their own against a top four rival under his management, and a look at each team's recent form suggests he'll manage to do that. Spurs have been scoring quite freely at home and I think they'll continue to find goals against this Chelsea defence. Prediction: Tottenham 3-1 Chelsea

Best of luck in Round Eighteen and I hope you all have a fantastic Christmas!
Enjoyed this? Share it!

James
36,885 caps
Pretty good picks Jack, the only one I find highly unlikely is the City win. I picked a draw there.
Report

TimmyT
19,932 caps
Only game I have differently is Palace to win over Newcastle (but I'm a Palace supporter!!) Think the Spurs Chelsea game will go a long way to confirm the likely Top 4.
Report