Jack  |  Social Media & Communities Manager
Mon 18 Jan 2021
Round 18 was a bit ordinary, wasn't it? Both in terms of Superbru picks and entertainment while watching, the short midweek round wasn't great so let's hope for an improvement across the 15 matches that make up a large Round 19!

There have been a lot of fixture postponements/changes so it's easy to get confused but in this round we have a regular weekend schedule which has been reduced to 9 matches rather than 10 because Aston Villa vs. Everton is postponed, plus 6 extra matches made up mainly of teams that didn't play in Round 18 plus a rearranged fixture between Villa and Newcastle which will be played next Saturday while most other clubs are playing in the FA Cup fourth round.

It's not easy to keep up but the best advice I can give you is to make all your picks for Round 19 now (you can always edit them nearer KO) and then join our FA Cup predictor and make all of those picks too! Here are my picks for the first 9 matches in Round 19, I'll be adding my thoughts on the other 6 games on Monday once I myself have gone back and reviewed my picks following the weekend's action. 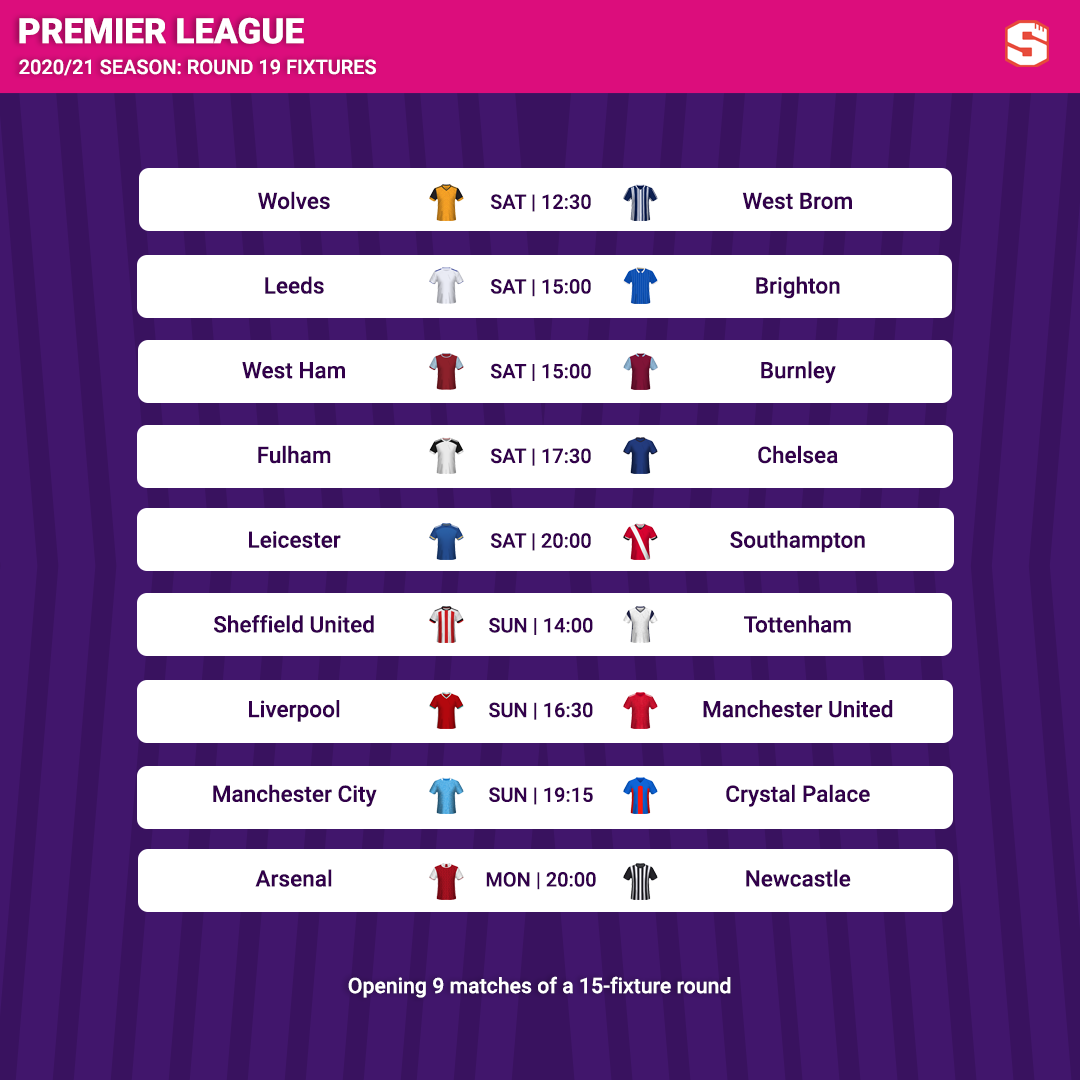 If anything, Allardyce has made West Brom look more likely to be relegated since replacing Bilic and while I don't think Wolves are a particularly good side at the moment either, this should be a home win. There doesn't tend to be many goals in games at Molineux and I'm going low-scoring because the Premier League has been lacking goals generally anyway but I think Wolves should be able to deal with the limited numbers of attacks WBA do manage. Prediction: Wolves 1-0 West Brom

Brighton's performance at Manchester City was another one where did they did fairly well, especially since they were missing so many players, but it's results that Potter needs given how few wins his side are picking up and it's difficult to pick them when they seem to lack that clinical edge. Leeds have been going well against teams below them on the table so I'm going for a home win. Prediction: Leeds 3-1 Brighton

I think I'm going to go for a slight upset and call a draw here. West Ham are favourites and have been going nicely but they've looked short of a goalscorer in recent weeks (other than Soucek!) so a lot is riding on injury-prone Antonio. Haller wasn't performing well for the Hammers but selling him to Ajax isn't a great move unless a very strong replacement is on the way in my opinion so that's one to keep an eye on. Burnley look as if they're back to being competitive in every game and I think they'll manage a point at least unless West Ham are really at it. Prediction: West Ham 1-1 Burnley

Fulham are on a very impressive run of draws - going to Tottenham and getting a point in those circumstances was a great effort. It does mean they've had far less time than Chelsea to prepare for this one though and the Blues tend to win this SW London derby. I don't think it will be easy by any means but Lampard's team need to pick up three points. Prediction: Fulham 1-2 Chelsea

Lots will be picking Leicester here and I'm more tempted to now following the news that Ings will almost certainly miss out but I don't like going against Southampton and I never trust Leicester! Saints don't lose many and I'm interested to see how the Foxes lineup as they look to ease Pereira and Under back in. I'm going for another draw. Prediction: Leicester 1-1 Southampton

Sheffield United have finally won a match so I have to start considering them for wins now and this is a tougher pick than it should be because Mourinho and Tottenham are still not learning that scoring early and then just defending for the rest of the game is costing them lots of points. The Blades won this fixture last year and I think they'll be competitive again but it still feels tricky to pick them with just 5 points to their name. Prediction: Sheffield United 0-2 Tottenham

What a huge game this is. Suddenly, rather than United going to Anfield to try and close the gap/delay Liverpool's title charge, this is a bigger game for the hosts because United could go six points clear at the top at least until City play. As much as I really hope this will be entertaining, there's potential for a boring, cagey match because I think Liverpool will be very wary of their makeshift centre-back pairing having to face a very good United attack.

Unlike previous meetings, I don't think this will be a case of Liverpool just committing men forward and peppering the United goal. The Reds haven't looked themselves in attack recently anyway but Thiago being back is a huge boost and I still can't see Liverpool losing simply because they haven't at Anfield for so long. Another draw pick for me! Prediction: Liverpool 1-1 Manchester United

This one is less likely to be a draw. City continue to look pretty good and managed yet another clean sheet in midweek against Brighton despite facing some late pressure. This game will probably play out similarly to that one. I'm aware of Palace's pretty incredible recent record at the Etihad but City look as difficult to score against now as they ever have under Guardiola. Prediction: Man City 2-0 Crystal Palace

Another evening fixture on it's own PL match day for Arsenal against a team they should beat... Let's hope it's more entertaining than the clash with Palace was! The Gunners really missed Tierney in that match so if he's back I'd be more confident that they'll manage 3 points, especially since Newcastle are unlikely to be as resilient as Palace. Prediction: Arsenal 2-0 Newcastle

I'll add some thoughts on the other 6 matches in Round 19 on Monday... 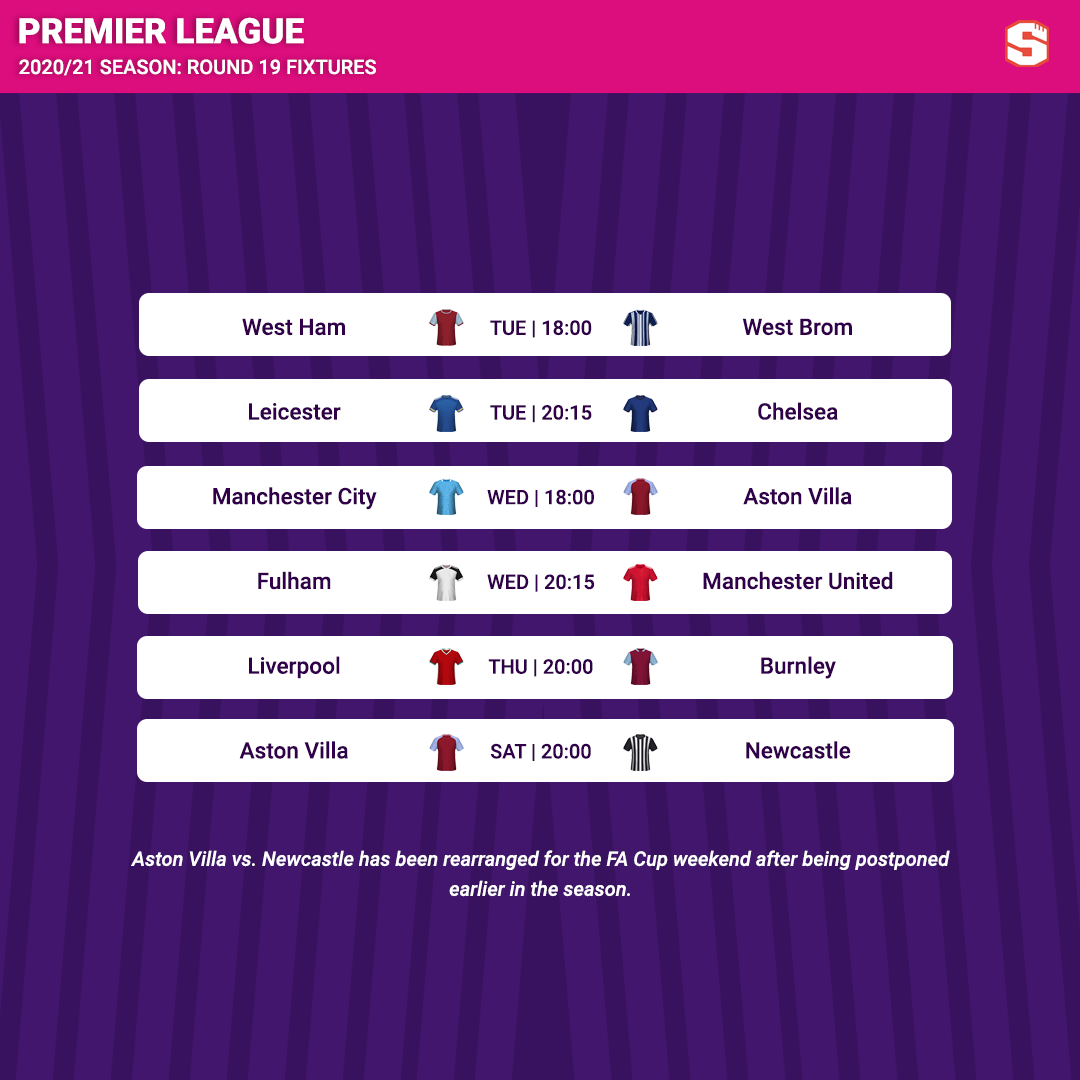 UPDATE: So then, we're 8 games in and Round 19 has been quite a mixed bag! My draw picks didn't pay off for West Ham v Burnley and Leicester v Southampton but I was pleased to at least get one right for Liverpool v United. I need some Exacts in midweek now!

Both these sides managed good wins at the weekend so it'll be interesting to see how they follow up now. Well done to the small percentage that backed WBA on Saturday and those that had Pereira or Ajayi in Odds-based fantasy - big points there! I didn't see that win coming at all despite having doubts over Wolves and I'm not really considering going against West Ham here. It's very rare to see an Allardyce team win 2-3 and it feels very unsustainable. Until WBA improve dramatically defensively, I can't see them consistently managing results. Prediction: West Ham 2-1 West Brom

Really tricky one. Again, both teams won at the weekend - Leicester did really well to beat Saints while Chelsea scraped a win at Fulham while appearing to save some players for this match. It's hard to be convinced by Chelsea but they obviously have dangerous players and I still have my doubts about Leicester - they fell away last year when the big games came up so will they deliver this time with an opportunity to go top? If they win this match I think it's fair to consider them dark horses in the title race let alone top four. I just have a sneaky feeling for Chelsea though. Finding that goal at Fulham was vital and the Blues have to prove they can beat a side at the top of the table this season. Prediction: Leicester 1-2 Chelsea

Though they've been brilliant this season, it's hard to see Aston Villa getting anything here after so long without playing due to their coronavirus outbreak. City are looking in excellent form as well. I've gone for a narrow scoreline because I think Villa will impress again but the hosts should be too strong. Prediction: Man City 2-1 Aston Villa

This is a similar story in that Fulham have been impressive of late (they looked to be really troubling Chelsea up until their red card) but will likely still just fall short of a result given Man United's away form. United's confidence is growing all the time on this unbeaten run, they picked up a good result at Liverpool and will find a way through this Fulham defence despite the serious improvement Scott Parker has seen from his team since September. Prediction: Fulham 0-2 Manchester United

At the start of the season, I'd never have expected Liverpool to go 4 games without a win in the PL and certainly wouldn't have expected 3 games without a goal! The pressure is now on the Reds to put out a clear statement in this game and you'd expect them to regain their scoring touch against Burnley. Klopp's team aren't playing awfully and I think will be helped in this game by Henderson coming back into midfield with Matip or one of the young centre-backs coming in at CB. Burnley are struggling for goals themselves so the hosts shouldn't have too much to worry about defensively. Prediction: Liverpool 2-0 Burnley

Both of these teams still have a match to play before this one but I'm fairly sure I'll be picking Villa whatever happens. Newcastle have been very ordinary for weeks now and Villa will get some match fitness back if nothing else at City before turning up for this game. Prediction: Aston Villa 3-1 Newcastle

Leandro
695 caps
Well I Enjoyed This Round A Lot
Report

Leandro
695 caps
Ok I’m a a Liverpool Fan And I Can’t Believe They Lost 0 -1 to BURNLEY!
Report

Leandro
695 caps
History In the Making!