Jack  |  Operations & Media Manager
Fri 20 May 2022
We've reached the final round of the Premier League season and with the title race, top four and relegation battle all yet to be fully decided, it should be a fun afternoon on Sunday!

After a fairly ordinary start to Round 37, I had a great evening last night as I picked Everton to win and then had Exacts for each of the 1-1 draws at Villa Park and Stamford Bridge.

Let's hope those Exacts power me on to a strong Round 38... Here are my thoughts on the final 10 games. 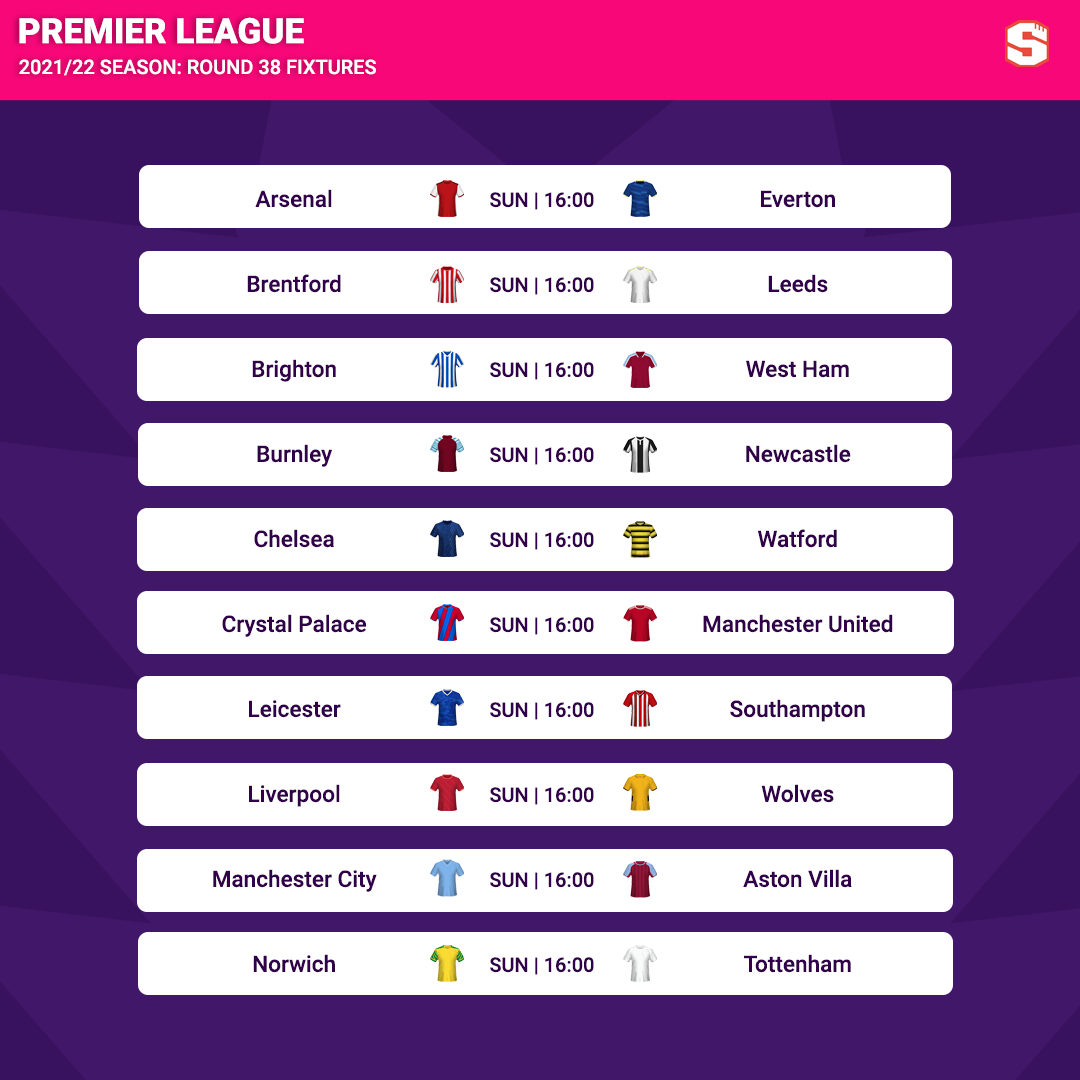 Well done to Everton on securing survival on Thursday - at half-time in that game they'll have been very concerned. Arsenal look completely shot to be honest after that hammering in the North London derby but now that the pressure is off them because Spurs will almost certainly finish 4th, I think we might see the Gunners finish the season well at the Emirates against some relaxed Toffees. Prediction: Arsenal 2-0 Everton

Leeds are in big trouble here. Brentford are finishing this season really well and they're probably one of the teams you least want to play on this final day as a result. I think the Bees will be well up for trying to send Leeds down and unfortunately for Jesse Marsch's side, I think they might just be missing too many key players to get a result. Goal difference could well be what ends up costing them and a lot of that is down to that awful month they had in February. Prediction: Brentford 2-1 Leeds

This should be an interesting game with Brighton in form and West Ham pushing for 6th. It's quite hard to split these two and their matches always seem to finish level so let's go with that. Prediction: Brighton 1-1 West Ham

I said the same about Brentford but Newcastle are one of the other teams you don't want to be facing at the moment when you're in Burnley's position. Despite being safe, it feels like Eddie Howe's team are determined to keep proving just how good they can be and I expect them to be right at it again in this final game at Turf Moor. It's hard to pick this match as I think Burnley may well set out to try and avoid conceding as a point could well be enough, but if they hear of an early goal for Leeds at Brentford, they have no choice but to go for it. I think they might just manage a point but Newcastle are the more likely winners. Prediction: Burnley 1-1 Newcastle

This is a dead rubber but Chelsea are obviously strong favourites and you'd think they'll manage a few goals despite looking pretty blunt in attack of late. Watford haven't been the most difficult team to score against this season. Prediction: Chelsea 3-1 Watford

I'm a little torn on this one. Manchester United are the team with something to play for as they need to win to make sure of sixth. They are also the team that has had far more time to prepare for this game. But they also just lost 4-0 at Brighton and have bene playing really poorly for weeks? I'm a bit concerned Palace will be fatigued after that defeat at Everton on Thursday but they've been tough to beat at home all season and after such a strong campaign I think they might manage one more decent result in front of their home fans to go into the summer on a positive. Prediction: Crystal Palace 2-2 Manchester United

Saints have been really struggling for months now and I think Leicester should be able to at least finish this difficult season with a win. I'm intrigued to see who Brendan Rodgers will bring in this summer as they look to reset things a bit. Prediction: Leicester 3-1 Southampton

In this situation, where Liverpool are the 'chasers', it always just feels inevitable that they'll win as all the pressure is on the league leaders to make sure they get the job done. Wolves' recent form also suggests this will be nice and easy for the Reds. Prediction: Liverpool 3-0 Wolves

Despite being a game that I would pick City to win without hesitation in any other round, it certainly feels tense for Guardiola's side and there is some doubt in my mind with Steven Gerrard in the visiting dugout. Surely City get the job done? I think some of the doubt is caused by their recent Champions League exits when under pressure but in the Premier League, this Manchester City team has been an absolute machine for years now. They deserve to win the title in my opinion and it's more likely than not that they will. Prediction: Manchester City 3-1 Aston Villa

Even Spurs will surely be able to avoid messing this up. Conte and his team deserve huge credit for getting into this position and I'd be amazed if they fail to get the job done at this final hurdle. Norwich have hardly landed a punch on anyone this season. Prediction: Norwich 0-2 Tottenham

So then, based on my predictions, it will be City lifting the trophy (after a nervy afternoon), Tottenham in the top four and Leeds going down. Let me know if your picks would result in a different scenario.

Thank you for following these picks articles throughout the campaign, it's always good fun. Once we've all had a week to rest (aside from the Champions League final), attention will turn to internationals with the Nations League Predictor!

Best of luck with your final picks of this PL season.

Crebo
2,793 caps
Hi Jack, surely Man United will win with the new manager in the stands. A performance will be needed as a lot of players are playing for their respective futures. And Newcastle to beat Burnley 2.1
Report

malcolm
2,353 caps
Thanks Jack
I thoroughly enjoyed your insight and commentary throughout the season . I should have used more of your predictions though.
Report

Aauxtyne
6,323 caps
Surely Man City will win the league. I don't think Aston Villa will get a goal!
Report

The Gunslinger
4,787 caps
Bring on next season.

Ricey
5,040 caps
It is certainly going to be a day of drama as most last days are. Mud Utd will lose. West Ham will be pushing to overtake Utd, Burnley/Newcastle will be drama, as will Brentford/Leeds.
And let's not forget about the City and Liverpool matches.
Enjoy the footie ya'all.

PHIL08
33,733 caps
Thanks Jack. I think that City are prepared for this one and will not mess up. It's all in their hands. Gonna be some interesting games Burnley/Newcastle and Palace/Man U. All the best to my Liverpool families and mates.
Report

Marching On Together
5,990 caps
Congratulations to Manchester City and Liverpool for pushing each other in a truly tremendous season.
Well done to Leeds United and commiserations to Burnley.
#MOT