Jack  |  Operations & Media Manager
Fri 14 Oct 2022
The penalty decision at the Emirates, Cristiano Ronaldo's 700th club career goal and my clumsy belief that Leicester were back resulted in a score of 6/10 for me in Round 10 which was just about in line with the community average.

This week, we have some more awkward picks (including Leicester again) while there's a big game at Anfield (but not as big as in previous seasons given the table) as Liverpool take on City.

Here are my thoughts on each game in Round 11 of the Premier League Predictor. 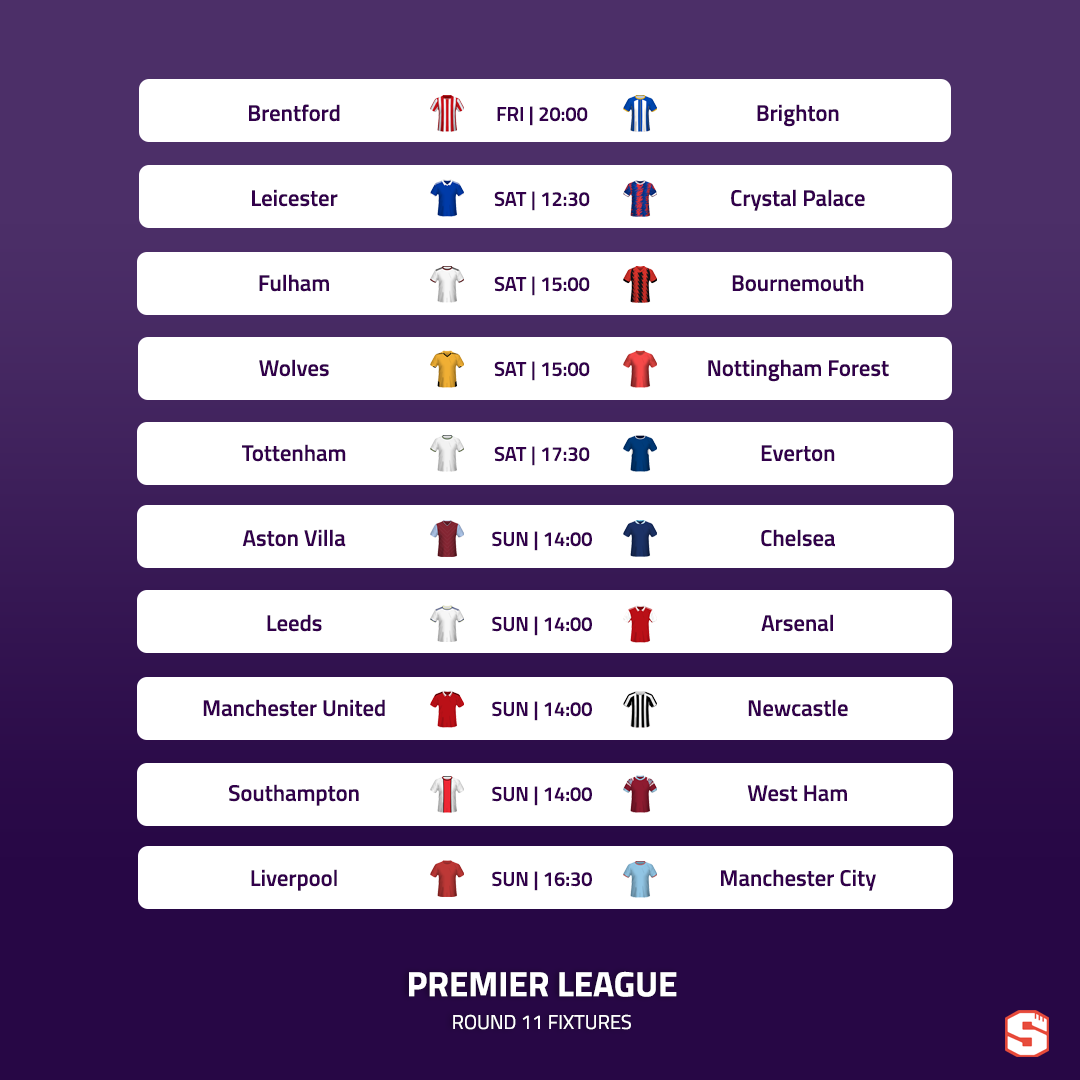 If Graham Potter was still at Brighton I’d be pretty comfortable picking Brighton here and that’s not to say that Roberto De Zerbi won’t prove successful with the Seagulls, it’s just that it feels as if he’ll understandably still be settling in. Last week was a poor result for Brentford but they’re tough to beat at home and I think we might see a draw. Prediction: Brentford 1-1 Brighton

I genuinely have no idea what to pick here. Palace have obviously been the better side this season but it still feels like it’ll be tough for them to win away at Leicester, yet the Foxes got dominated in the second half of last week’s game at Bournemouth. With that in mind, and given Leicester’s defensive displays throughout this season, I think I’m going to go with Palace as Eze, Olise and Zaha could cause a lot of problems. Prediction: Leicester 1-2 Crystal Palace

I can’t believe Bournemouth have managed a 5-match unbeaten run after sacking Parker - interim manager Gary O’Neil deserves a lot of credit. It feels harsh to go against them when they’ve surprised us so many times but I think this week is another week of Mitrovic watch. If he’s not in the squad, I’m switching to a draw but if he’s fit to play then I think Fulham will come out on top at Craven Cottage. Prediction: Fulham 2-1 Bournemouth

Surely this is a game where we finally see Wolves find a win and actually show some kind of threat in attack with the quality players that they have! It seems they’re still some way from finding a new manager but that isn’t necessarily a bad thing if it means they are waiting for the right person who can help transition towards a style of play that sees them scoring far more goals. Forest were very ordinary again on Monday night and were just fortunate that Villa are so toothless in attack - though now I say that, I’m very wary that Wolves could be the same. Prediction: Wolves 2-0 Nottingham Forest

Another home win makes sense here as Son and Kane looked sharp in midweek against Frankfurt. Despite playing fairly poorly for the first time in a while, Everton still tested Manchester United and could have snatched a point last weekend so they won’t make it easy for Spurs but it’s the hosts who are likely to have far more attempts and eventually find a way through. Prediction: Tottenham 1-0 Everton

An upset is always possible but this looks like it should be a Chelsea win as they continue to impress under Graham Potter while Villa remain very uninspiring to watch. Villa will have to be very clinical in terms of both chance creation and finishing in order to win this game and they’ve shown little sign of that for quite a while now. Prediction: Aston Villa 0-2 Chelsea

Fair play to Arsenal who got that big game win last weekend to stay top of the league and they should now have too much for Leeds who are going backwards at the moment. How good was Martinelli last Sunday? If you’re a Leeds defender, you do not want to find yourself in a foot race with him. Prediction: Leeds 1-3 Arsenal

This will be a test for Manchester United, who struggled against Omonia on Thursday night, because Newcastle appear to be finding some great form in attack but I still feel the hosts will just about win this. Newcastle’s record at Old Trafford is poor and we’re yet to see them win away this season outside of that victory over a 10-man Fulham so I think a home win is the safer pick. Prediction: Manchester United 2-1 Newcastle

Ralph Hasenhuttl really needs a win here and Saints certainly have a chance considering they were unbeaten in 3 meetings with West Ham last season, but it feels like the Hammers are starting to hit their stride in this campaign and I think they’re the more likely winners. Bowen is starting to score consistently again which is important and there are plenty of other potential goalscorers in the West Ham squad, particularly now that Moyes can rotate between Antonio and Scamacca. Prediction: Southampton 1-2 West Ham

This game may not be as big as it has been in previous seasons because of how poor Liverpool have been so far, but there’s still potential for a huge result either way as a win for the Reds might be just what they need to get back to their usual selves, while there’s also a genuine chance that City absolutely batter them. Considering Liverpool have just conceded 3 goals against both Brighton and Arsenal, I think you have to pick City because they’re going to cause the Liverpool backline so many issues.

Luis Diaz is a big miss for the hosts in attack. I’ve been really impressed with Firmino stepping up this season when many (including myself) thought his time at Liverpool was almost over, and Darwin Nunez is starting to show what he can do, but I don’t see how Liverpool can match this City team for goals and the 1-7 win at Ibrox where Rangers completely folded in the second half doesn’t really change much for me. Prediction: Liverpool 1-3 Manchester City

Good luck with your own Round 11 picks!

ADMIN
Jack
39,847 caps
Yes just been editing this! Apologies, didn't initially spot that the 3-1 home win in March was in the FA Cup rather than the Premier League. 14 Oct 10:43
Report

The Gunslinger
8,297 caps
6-1 to City would be awesome. But I would not rule out a win for Liverpool either.
Report

DreadedRed
31,956 caps
Oh, remember those heady days in 2020 when pool and sundry shouted from the rooftops that we were all blessed to be witnessing the glorious march of approximately the greatest team in living memory.
Report