The other 6 were of course considered upsets, at least on Superbru, though I'm annoyed I talked myself into going for Spurs at West Ham!

We're straight into another round here though so let's see how things go. For last season's top four, remember the Champions League begins on Tuesday meaning minor squad rotation is possible, even so early in the season.

Here are my thoughts on each game in Round 6 of the Premier League Predictor. 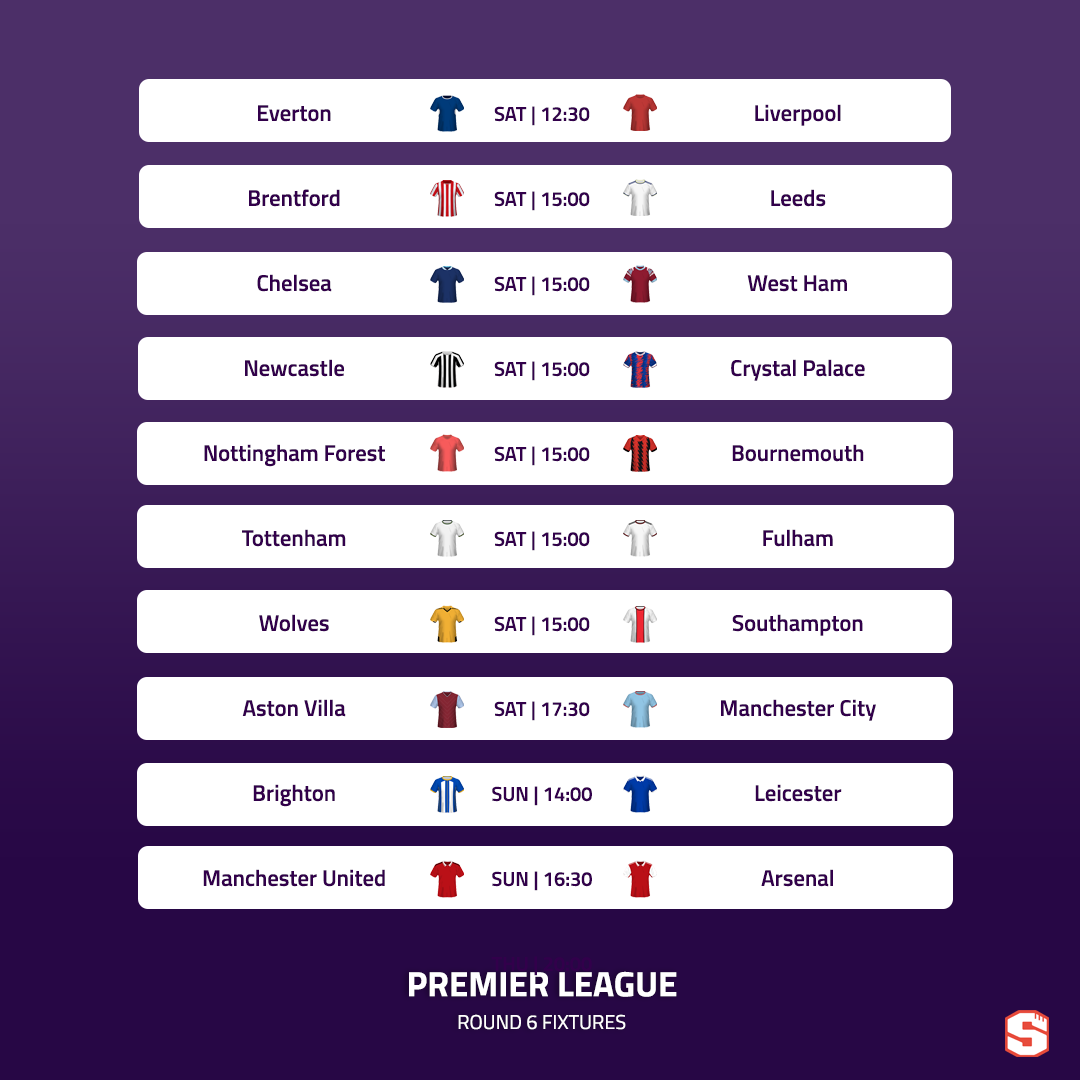 They're still dependent on Calvert-Lewin being back soon (and staying fit), but Everton have recruited pretty well this summer I think as they look fairly strong both in defence and in midfield now. Frank Lampard has made the Toffees difficult to beat in these opening weeks, but it's hard to see them winning a game until they have greater fire power in attack.

It's not impossible that this is another draw but I think you have to go with Liverpool. The controversially late winner against Newcastle is massive for them and I'm excited to see how Darwin Nunez goes on his return - there'll be around 40,000 people trying to wind him up again! Prediction: Everton 0-2 Liverpool

Not an easy pick but with Rodrigo now injured and Bamford not fully fit I don't think, Brentford seem the more likely winners. Brentford aren't an easy team even with a fully available squad. Prediction: Brentford 2-1 Leeds

Chelsea have spent a lot of cash in this window so there's pressure on Tuchel to get his team firing sooner rather than later. The Blues haven't been very impressive outside of the Tottenham game so far this season but the Bridge remains a difficult place to go and West Ham rarely win there. I'm going with Chelsea but there's definitely potential for an upset here - it will be interesting to see how Fofana settles but once he has Tuchel should be selecting a far more consistent backline which will help. Prediction: Chelsea 2-1 West Ham

Newcastle are probably favourites but I think Palace can get something at St James' Park following decent displays at Anfield and the Etihad. The hosts will definitely be after 3 points rather than yet another draw but I think Palace are good enough to get at least a point. Prediction: Newcastle 1-1 Crystal Palace

I appreciate they lost a lot of players after coming up but I think even loyal Nottingham Forest fans would agree their transfer window became a bit ridiculous in terms of the number of players that have been brought in. That doesn't really affect this prediction though and there's certainly enough quality in a few of those new players to really trouble Bournemouth who in comparison, have very little attacking threat. Prediction: Nottingham Forest 2-0 Bournemouth

I tipped Fulham to stay up fairly comfortably this season but their start has been even better than expected and they'll continue to really trouble teams all whilst Mitrovic is scoring as frequently as he is. If this was at Craven Cottage I think they could get something but I think this trip to Tottenham will go similarly to their other recent away match in North London. Prediction: Tottenham 2-1 Fulham

Toughest pick of the round for me. Wolves are definitely due a win, but absolutely love a draw, while Southampton are beginning to impress. When I feel all 3 outcomes are pretty much evenly possible, I tend to go with a home win and last season's meetings between these two backs that up. Prediction: Wolves 1-0 Southampton

Going into the Forest game, I thought this Villa match will be the one where Guardiola gives Haaland a rest ahead of the Champions League but it feels a bit silly to take him out of the team at the minute! Regardless of what happens there, Alvarez also looks clinical in front of goal and City should have too much for Villa who continue to look very flat under Gerrard who desperately needs a big performance from his team. Prediction: Aston Villa 1-3 Manchester City

I think Leicester will start finding a few wins soon but they were pretty ordinary yet again against United and this is a tough fixture. My only concern with Brighton is that the goals could dry up again at some point but they're a very good side and it makes sense to pick them this week in my opinion. Prediction: Brighton 1-0 Leicester

I'm not too sure about what will happen, but this should be fascinating. Everyone's wondering where both of these teams really are in terms of their level as Arsenal have that perfect record but are yet to face a big six side and United seem as if they might have turned a corner but it's also still very early days.

A couple of weeks ago there's no doubt I'd be picking Arsenal but I feel like United are the more likely winners now. Defensively, they look so much better with Dalot, Varane, Martinez and Malacia as their four, and with Casemiro likely to be starting each game very soon (perhaps including this one) that should only improve things further. I think Arsenal will miss Partey in this game and their lack of depth both in that area and now on the wings as well could prove a problem in the coming months in my opinion. Prediction: Manchester United 2-1 Arsenal

Good luck with your own Round 6 picks!

Fleeto2021
605 caps
Southampton only 1 win since 2005 over Wolves so yeah home win is likely.
Report

Jersey-puller
26,760 caps
Man U turning a corner? Two scrappy 0-1 wins versus ordinary teams? I suppose after the HUMILATION of losing 4-0 Brentford, its progress at the back at least? I did mean to play it safe with a 0-1 Leic v Man U but Leicester put out a full strength team so stuck with 1-1. It was only after I realised I was on 4/9 so it cost me 3 plus a Slam point...ARRGGH! And I was going to switch Rashford for 4:1 goal scorer Sancho as Rashford MBE was more likely to be subbed by 'His Holiness'. But it was Sancho who made way. Double AARRGHH!

Oh and Pep clearly plays SB Odds-based. Played Haaland, rested De Bruyne when most assumed the reverse. Surely no Haaland start this round though at Villa, UCL Tues & Weds. Brumail me for UEFA FREE XI Fantasy SB only Private League.

Jersey-puller
26,760 caps
Yes perhaps for 3 reasons. 1. He is young with good recovery ability. 2. Strikers burn less calories than Box to Box midfielders, they tend to jog then sprint then jog or stroll, compared to midfielders darting about constantly. 3. He only needs about15 minutes to score THREE FECKIN GOALS! 3 Sep 00:45
Report

The Gunslinger
6,587 caps
Another weekend of surprises. Doing quite well in the fantasy predictions so far. Bring on the action!
Report

Rugga 14
201 caps
How do I delete the premier league soccer from supabru?
Report

Markomd66
1,305 cap
Wow another crazy weekend, got 2 out of 8 right. About ready to throw in the towel and stick to sports I know like racing and American Football.
Report

The Gunslinger
6,587 caps
Never give up. You can soon be shooting up the table.
Report

The Gunslinger
6,587 caps
Same for me Marko. Absolute garbage.555. Things can only get better.
Report