Jack  |  Operations & Media Manager
Tue 30 Aug 2022
It was nice to finally have a slightly more generous Premier League Predictor round at the weekend as many of us managed to pick up a fair number of points in Round 4.

My gamble on Forest getting a point obviously didn't pay off but I was fairly pleased with 8/10 overall with a couple of Exacts.

It's now time for the first midweek round of the season so we'll have to see how teams cope with the short turnaround.

Here are my thoughts on each game in Round 5 of the Premier League Predictor. 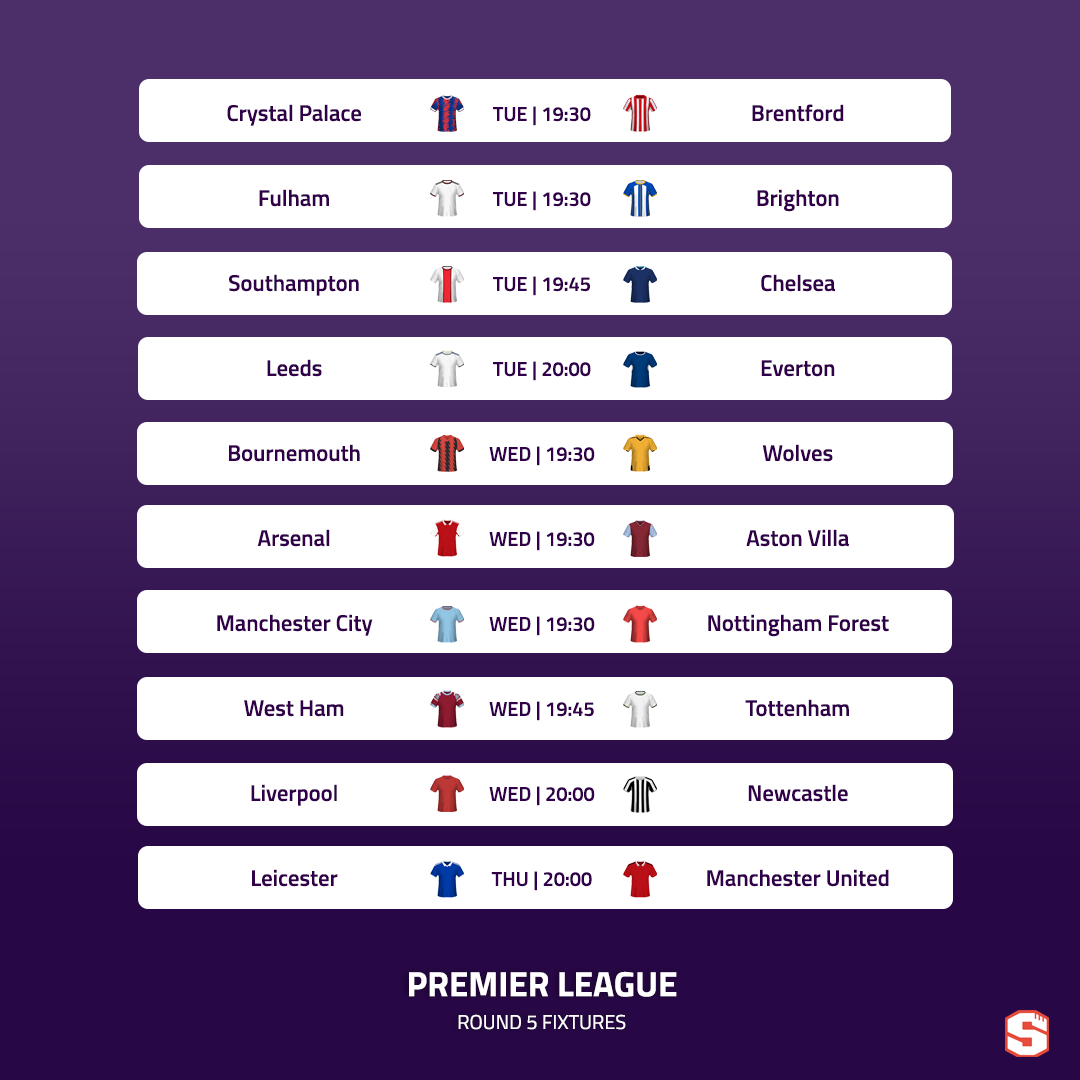 Brentford's match with Everton was the other one I got wrong in Round 4 and I think they'll be disappointed to have dropped points as they were unlucky not to score more goals. This is a difficult game for them and I think Palace are the more likely winners. I'm really enjoying watching the Eagles under Patrick Vieira. Prediction: Crystal Palace 2-1 Brentford

This is a difficult pick as both teams have started well, particularly Brighton. Mitrovic has been so dangerous but we're still yet to see a single opposition player score against Brighton this season! With that in mind, it's hard to go against the Seagulls. What a job Graham Potter is doing. Prediction: Fulham 0-1 Brighton

There's potential for an upset here as Saints looked fairly good against United and Chelsea were fairly fortunate to hang on against Leicester, albeit with 10 men so they did well to get ahead in the first place. The Blues tend to go alright at St Mary's though and Sterling finding his first goals for Chelsea is a promising sign for them. Prediction: Southampton 1-2 Chelsea

Leeds are the more likely winners here and I think I'm going to go with them but I am slightly wary about whether or not they'll break Everton down in a game where they're likely to have quite a lot of the ball. I think Leeds are most dangerous on the counter or when trying to snatch the ball from teams who like to have possession which isn't how this game is likely to play out but even with Maupay signing for Everton, there isn't too much for Leeds to fear in the other direction so they should take the points at home. Prediction: Leeds 2-1 Everton

Scott Parker must have been sacked because of a fall-out rather than based on results (even in spite of the 9-0 last time out) and I think it leaves Bournemouth in even more trouble to be honest. Ultimately, the Cherries don't really have a squad that's strong enough to compete at this level and I think Wolves will win this after looking pretty good in recent weeks. They're certainly due a win! Prediction: Bournemouth 0-2 Wolves

The loss against West Ham means Villa have failed to pick up any points from 3 matches that they'll have expected to take something from so the pressure is really on Steven Gerrard and it's not looking great with this fixture followed by a trip to City. I think you have to go with Arsenal here but it will be interesting to see if the Gunners can keep up their performance level in the coming weeks as the fixtures now start to pile up. Prediction: Arsenal 2-0 Aston Villa

If Forest try and play 'their way' as they did against Tottenham (which I have some respect for), this could be a Liverpool v Bournemouth type scoreline. I'm fairly sure Steve Cooper's side will adapt though and they'll be forced to in a way as they aren't going to have much of the ball. City are just so strong in attack that you have to back them. Prediction: Manchester City 4-1 Nottingham Forest

Going against Tottenham didn't work out for me in Round 4 but I am tempted to do so again here as they often struggle at West Ham who will be right up for this derby. However, based on each team's season so far, I think I am going to go with Spurs to just about edge it. Kane is on fire and I think we might see Richarlison given a go from the start in place of Son which would add some fresh intensity. Prediction: West Ham 1-2 Tottenham

It will still be a far tougher test for Liverpool than Bournemouth were, but this looks like a favourable time to be facing Newcastle as a few of their key players are injury doubts. Of course, Liverpool would be favourites even against a fully fit Newcastle squad but I feel more comfortable backing a home win because of Wilson being out and the question marks over Guimaraes/ASM. Winning 9-0 is probably quite good for Liverpool's confidence, too! Prediction: Liverpool 3-1 Newcastle

Leicester have had the better of United in recent seasons so I have definitely considered picking them but it's not easy to have faith given their start to the season. It sounds as if they'll be losing some players in this final week of the transfer window too and United did really well to follow up their win over Liverpool with an away victory at Southampton. Let's go for a narrow away win now that United have broken their terrible losing streak on the road. Prediction: Leicester 1-2 Manchester United

Good luck with your own Round 5 picks!

Fleeto2021
605 caps
Jack, spurs will haunt you again I fear. West Ham due a good performance at home.
Report

Jersey-puller
26,760 caps
Fantasy rotations will be a nightmare, tough on those asleep downunder unable to check 8 starting XIs from 7pm to 7.29pm. Will Man City's Haaland & others start or even play with UCL starting next week too?
Report

Ajie
171 caps
Is there any reward at the end of the season?
Report

The Gunslinger
6,587 caps
Just the pleasure of participating in the event.

The Gunslinger
6,587 caps
How unpredictable predictions can be. 0 out of 4
Report

The Gunslinger
6,587 caps
City to win 10 zero. Anything is possible.
Report

Markomd66
1,305 cap
That's what I have is 0 out of 4. I figured midweek picks would be tough. Hopefully tomorrow is a better day.
Report

The Gunslinger
6,587 caps
Anything is possible. They have been flashing the cash recently. 31 Aug 13:13
Report

Markomd66
1,305 cap
Had a better day on Wednesday I went 4 out of 5. Kinda makes up for yesterday.
Report