Jack  |  Operations & Media Manager
Fri 30 Dec 2022
I was fairly pleased with 7/10 in Round 17 which included a couple of Exacts. Thankfully, most teams continued fairly consistently in terms of form despite the long pause for the World Cup.

Unfortunately, the most significant football news in the last 24 hours has been the passing of the great Pelé, aged 82. The undisputed king of the World Cup, Pelé was undoubtedly one of the very best we've ever seen. Our thoughts are with his family and the millions across Brazil where he was of course an icon.

We now go straight into the New Year's round which is quickly followed by Round 19 on Monday so make sure you've got picks in in advance!

Here are my picks for Round 18 of the Premier League Predictor. Feel free to leave your own in the comments. 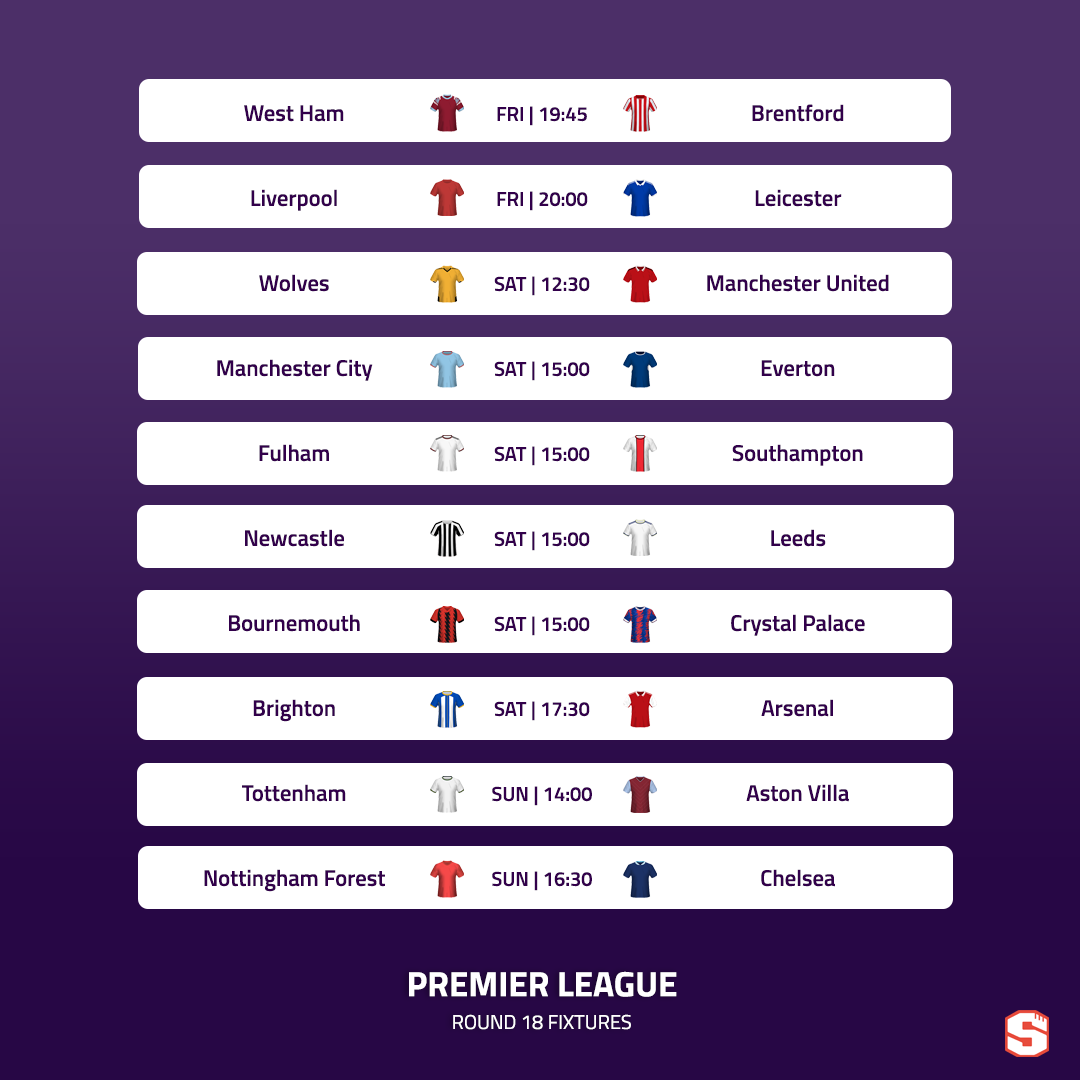 West Ham are overdue a win but it's hard to go against Brentford at the moment as they're playing well and scoring goals. I think West Ham should be able to end their losing run but I'm not convinced they'll take all 3 points. Prediction: West Ham 1-1 Brentford

After being outplayed at home by Newcastle, it's hard to see Leicester getting anything here. Liverpool will be pleased with their result at Villa and the signing of Cody Gakpo (he's not available to play for them yet) is a very exciting one for them which came out of the blue! Prediction: Liverpool 2-0 Leicester

Despite being second best for a fair amount of the game, Wolves managed a massive three points at Everton on Boxing Day which Julen Lopetegui will be delighted with but there certainly wasn't enough in that performance to suggest they can win this game too I don't think. United are looking strong as I said in my last article and I think we might see them have a really good second half of the season. Prediction: Wolves 0-2 Manchester United

This is a really difficult pick as it's very hard to gauge where Palace are at following that disaster on Boxing Day where they ended up with 9 men. Bournemouth pressed relatively well against Chelsea but were quite poor otherwise defensively and 5 defeats in 6 games makes it hard to pick them. I'm considering a draw but perhaps Palace will edge it as they need a response to that Fulham defeat? Prediction: Bournemouth 1-2 Crystal Palace

Fulham should win this one. I think Saints fans will be very concerned about relegation as sadly, it didn't sound as if there was much to cheer about in that loss to Brighton in Round 17. Fulham have been excellent this season and are certainly the form team. Prediction: Fulham 3-1 Southampton

City are obviously the team to pick here. Given the teams Everton have been beaten by in recent rounds, it would be a huge surprise to see them come away from the Etihad with anything. Prediction: Manchester City 3-0 Everton

Newcastle picked up right where they left off before the World Cup against Leicester and that's bad news for Leeds who are unlikely to be able to match them. It should be quite open though and hopefully there'll be a few goals. Prediction: Newcastle 3-1 Leeds

This is the most intriguing match of the round for me as it'll be interesting to see if Brighton are able to take a point or 3 off Arsenal - they certainly have the potential to do so if they're at 100% and Arsenal aren't. I think the Gunners will win but we're now entering a very interesting period in the title race (if the less superstitious Arsenal fans are prepared to admit that they do stand at least a tiny chance of going all the way) as Arsenal's next few fixtures are tough, including this one. I think Brighton will cause some problems but I'm not sure they'll be strong enough defensively to get a result. Prediction: Brighton 1-2 Arsenal

Tottenham remain very unconvincing and I think Villa can get something here if Emiliano Martinez is back in goal and Spurs' tendency to start terribly continues. Of course, if Spurs are at their best then they should take the points but we haven't seen too much of that from them in recent rounds and I think Villa will be tough to beat in their remaining games this season under Emery. Prediction: Tottenham 1-1 Aston Villa

Chelsea looked really strong in the first half of their win over Bournemouth but Reece James getting injured again is a big concern for them and I don't think this will be easy at the City Ground. There's a chance of a draw here as well in my opinion but I'm going with Chelsea to narrowly take it based on the improved attacking performance we saw from them in Round 17. Prediction: Nottingham Forest 1-2 Chelsea

Good luck with your own Round 18 picks and Happy New Year!

The Gunslinger
9,712 caps
I think Pele deserved to be recognized for his contributions to football. A genius of a player.
Report

ADMIN
Jack
41,247 caps
You're quite right, Andy. Have just added our social media tribute from last night to this piece so that will be visible shortly. 30 Dec 13:30
Report

The Gunslinger
9,712 caps
Good luck with your predictions Jack. I am sure you will beat me again.
Report

Markomd66
1,928 cap
Excellent tribute to Pele my he rest in peace and thank you for your contribution to a beautiful game.
Report