Hutch  |  Commercial Director
Thu 11 Nov 2021
The agony of missing out on the GSP last week still persists, and it was the Romania v Uruguay match that cost me. I managed to pick Portugal - as did the Superbru Insights algorithm and 12% of people on Superbru - as well as Scotland beating Australia (26%), but I did not expect Romania to beat Uruguay (38%).

To make matters worse, I hadn’t seen that result earlier on Sunday, so celebrated wildly when Scotland won in the afternoon, thinking that I had clinched the GSP.

But anyway, it wasn’t a bad set of picks, I’ll put it behind me and see if I can land the full house this time around.

Here are my November Internationals predictions for this weekend. 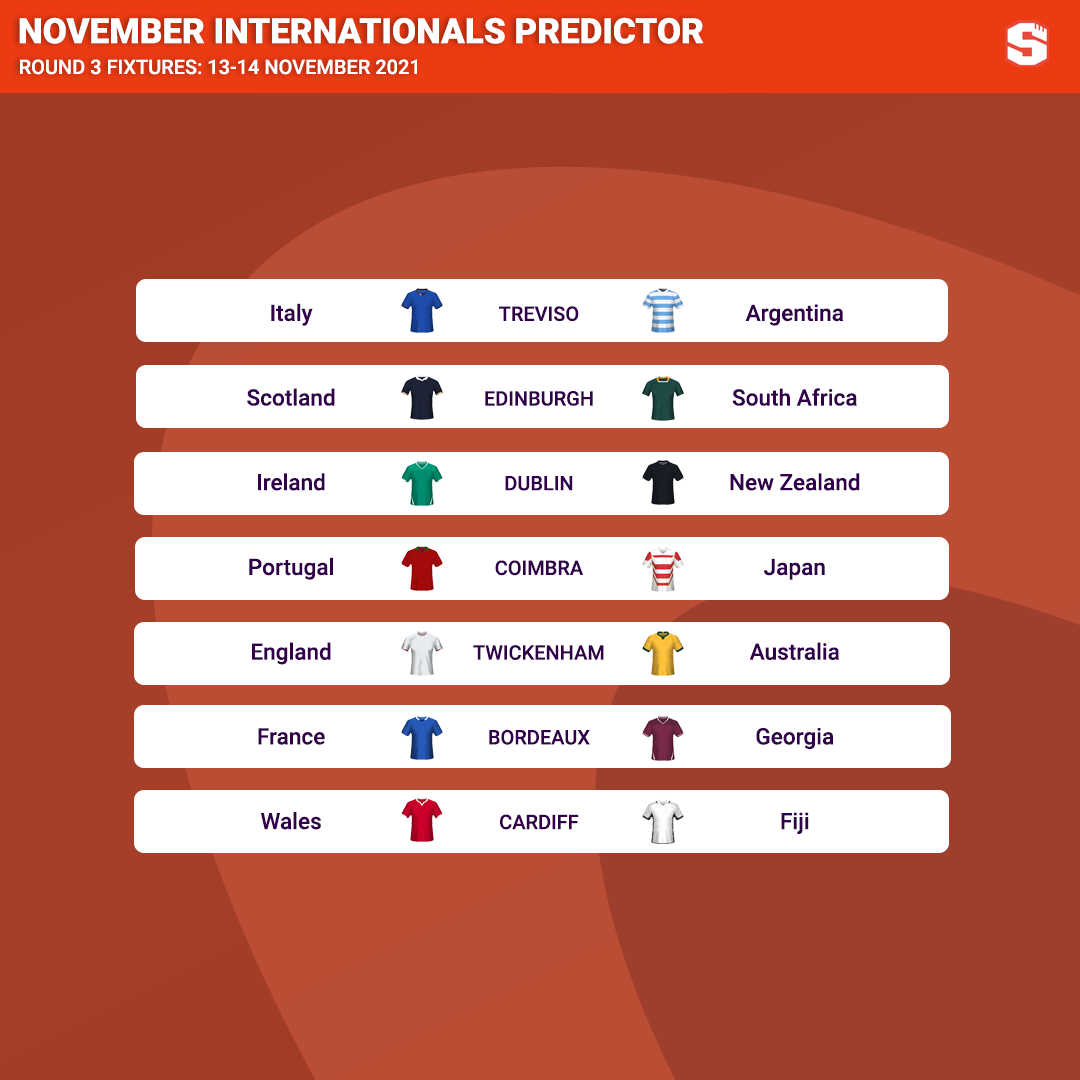 The Pumas played better than expected against France last weekend, and they usually have the upper hand over Italy. There could well be an upset in this opening match, but I’ll go with the favourite. Argentina by 6

Whilst it was a great victory for Scotland over Australia on Sunday, neither team were particularly impressive, and this will be a big step up against the world champions. It’s a very strong South African team, and I actually think it will be relatively comfortable. South Africa by 13

Ireland showed a lot of attacking intent against Japan, and scoring 60 points against a team that beat them in the World Cup is no mean feat. They’ll have learnt a lot from South Africa’s win over the All Blacks earlier this year, and they’ll fancy their chances of a win. However, New Zealand rested most of their first-choice players last week, and it’s almost impossible to pick against them. New Zealand by 5

Covid continues to hamper the England camp, with Joe Marler ruled out this weekend, but they had a good warm-up against Tonga last week and I think they’ll be too strong for the Wallabies. Australia really missed Samu Kerevi and Quade Cooper last week, and it seems unlikely that they’ll beat England for the first time since the 2015 World Cup. England by 9

This should be fairly straightforward for France, fresh from their win over Argentina last week and they’ll be far too strong for Georgia. France by 33

I’m expecting another home win here, although some Welsh fans will always be wary of Fiji since the 2007 debacle. This should be a bit of welcome respite for Wales, having played the All Blacks and Springboks so far, with the Wallabies to come next week. Wales by 23

Good luck with your own picks in Round 3.

Jersey-puller
23,647 caps
No upsets is an upset in itself these days on Superbru, especially with the English Premier League Football. I feel like a survived walking through a minefield blindfolded in this contest last round.
Report

Prowler
21,003 caps
The only possible upset might be Scotland beating the Boks. With the inconsistent Willie le Roux and Elton Jantjies back in the team it might be either a big score for the Boks or humiliation. I would just like to see Herschell kicking a bit less, then the Boks might run away with it.
Report

caplegal
21,657 caps
I agree. The Biggar vs Pollard kickfest is the epitome of what rugby should not be. 12 Nov 20:47
Report

dugardy
11,409 caps
Concerned with Boks 9,10 & 15 playmakers or play killers ??? Thankfully Rassie is in the box now and the bench is ready to rectify any first half deficit, as long as it's not more than two scores.
Report

El Predictio
26 caps
Scotland to beat the boks and the Irish to skin the ABs. Theres two upsets for you !
Report

The Gunslinger
629 caps
Got the Ireland score wrong. Apart from that not a bad round.
Report