Hutch  |  Commercial Director
Thu 4 Nov 2021
International season kicks off in earnest this weekend, and there are no fewer than 9 matches to get stuck into, so we can expect to see plenty of movement on the pool leaderboards.

Here are my November Internationals predictions for this weekend. 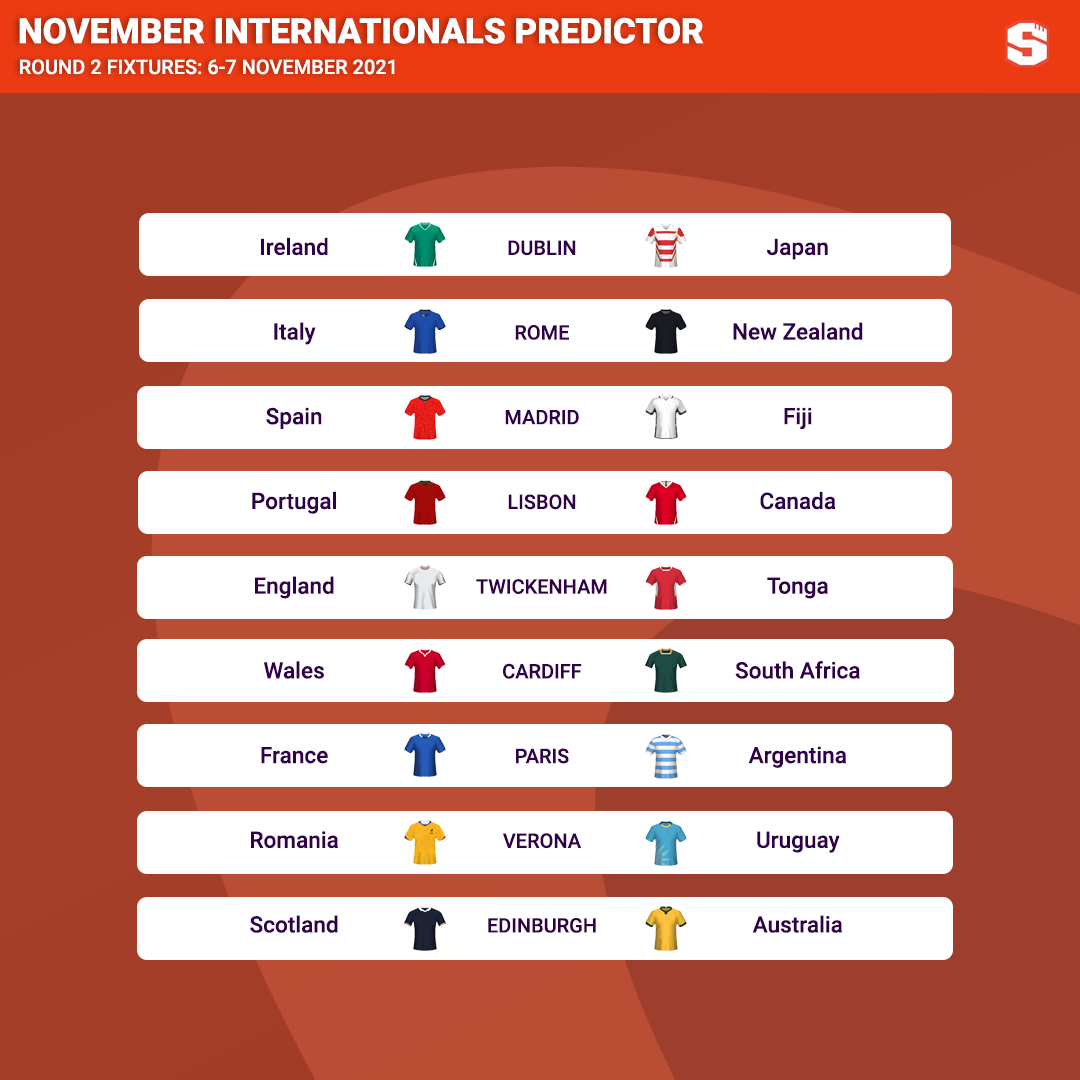 Japan famously beat Ireland in the 2019 World Cup, which ultimately led to the Irish exit at the hands of the All Blacks. However, Japan lost at home to the Wallabies a couple of weeks ago, and I’d expect Ireland to be too strong for them in Dublin. Ireland by 13

This is going to be fairly one-sided affair sadly, and I’d be surprised if Italy can keep the margin within 50 points. New Zealand by 58

I haven’t seen a lot of Spain to be honest, and for that reason, I’m assuming Fiji must be the stronger team. The Superbru Insights preview has a good reference point, which might help you with the margin. I'm going for Fiji by 16

Portugal are becoming more of a force in international Rugby, whilst Canada’s trajectory seems to be the opposite. I’m going for a narrow home win here on that basis. Portugal by 6

This will be a comfortable home win, but England always seem to start slowly, and presumably they’ll be aiming to be in peak condition by next Saturday with sterner tests ahead. I’m anticipating a frustrating afternoon with plenty of errors and missed opportunities, but the result will never be in doubt. England by 48

The Welsh have won 4 of the last 5 against South Africa, but it seems a stretch to think that they can bounce back from shipping 54 points to the All Blacks to beat the Springboks. They’ll have a number of additional players available and it should be closer than that, but I’m backing the Boks to win. South Africa by 13

The Pumas had a fairly torrid time in the Rugby Championship, culminating in two heavy defeats to Australia - against whom France played out three very close Test matches in July. France should be the stronger team here. France by 8

I have a feeling this will be quite close, although it’s based on a hunch rather than anything factual. Uruguay were enjoyable to watch at the World Cup in 2019, particularly in that famous win over Fiji, and I’m tipping them on that basis. Uruguay by 3

The Aussies are short of a few key players and the Scots might just fancy their chances here. They had a good warm-up thrashing Tonga last week, and spirits will be high in camp. I might just see whether the GSP is still intact by this stage, but for now I’m picking Scotland. Scotland by 2

Good luck with your own picks in Round 2.

Prowler
21,003 caps
The Boks always lift for the All Blacks, but in all their other games they haven't really impressed me much. And they have a very bad record lately against Wales, especially in Cardiff. Wales will have their foreign based players available again and should just be strong enough to beat the Boks - less than 10 points. And Scotland didn't do anything spectacular against Tonga. It was actually a bit of a boring game. Australia is going to beat them by a big margin - I'd go for at least 20 points. And I would think with the players available to France they should at least put 30 points on the Pumas.
Report

MarjK
1,808 cap
I will be very surprised if The Wallabies beat Scotland.
With Quade Cooper and Kerevi absent their chances are not good, but we shall see if my hunch is right, I hope they can continue their run but they just don't have the Top Class replacements. Scotland can run all over them with some of their Top Players back, Hogg, Russell and Van de Mere, not to mention the crowd.
Sorry Rennie. Picked Scotland to win by 21-30. Backed them to win by 31-40.........Paid more.......LOL! 4 Nov 23:46

Hennessy
30,686 caps
So, are you going to change the Scotland prediction, Hutch - your GSP is still on...
Report

gdcraic
13,277 caps
Scotland beat Tonga but be fair it was a worse team than todays AND for most of the game they looked crap
Report
Edition: North America change
Superbru on Facebook
Superbru on Twitter
Superbru on Instagram