Superbru Team Wed 23 Jun 2021
It's been quite some time now since the world's rugby calendar has felt 'normal'. When sport has been possible, we've seen some temporary competitions, newly formed tournaments and a lot of derbies but with a bit of luck, the future is now finally starting to look slightly more clear and stable.

Last week, the PRO14 announced that they will be rebranding as the 'United Rugby Championship' (URC) later this year - a tournament that will include the existing PRO14 teams plus South Africa's 4 ex-Super Rugby franchises: the Bulls, Lions, Sharks and Stormers. This means the URC will be the new permanent home for South Africa's franchises following the breakup of Super Rugby.

For various reasons, a major one simply being geographical location, South Africa has suffered more than most rugby nations during this pandemic but the Springboks will finally return to action next week as world champions for the first time since lifting the Webb Ellis Cup back in 2019. This new United Rugby Championship provides further great news, as we can now see what is set to be the future for South Africa's franchises after the upcoming British & Irish Lions tour.

We realise there's quite a lot to take in following the various temporary tournaments teams have been involved in throughout the pandemic, so here's all you need to know about the newly announced United Rugby Championship which is set to be far more permanent. 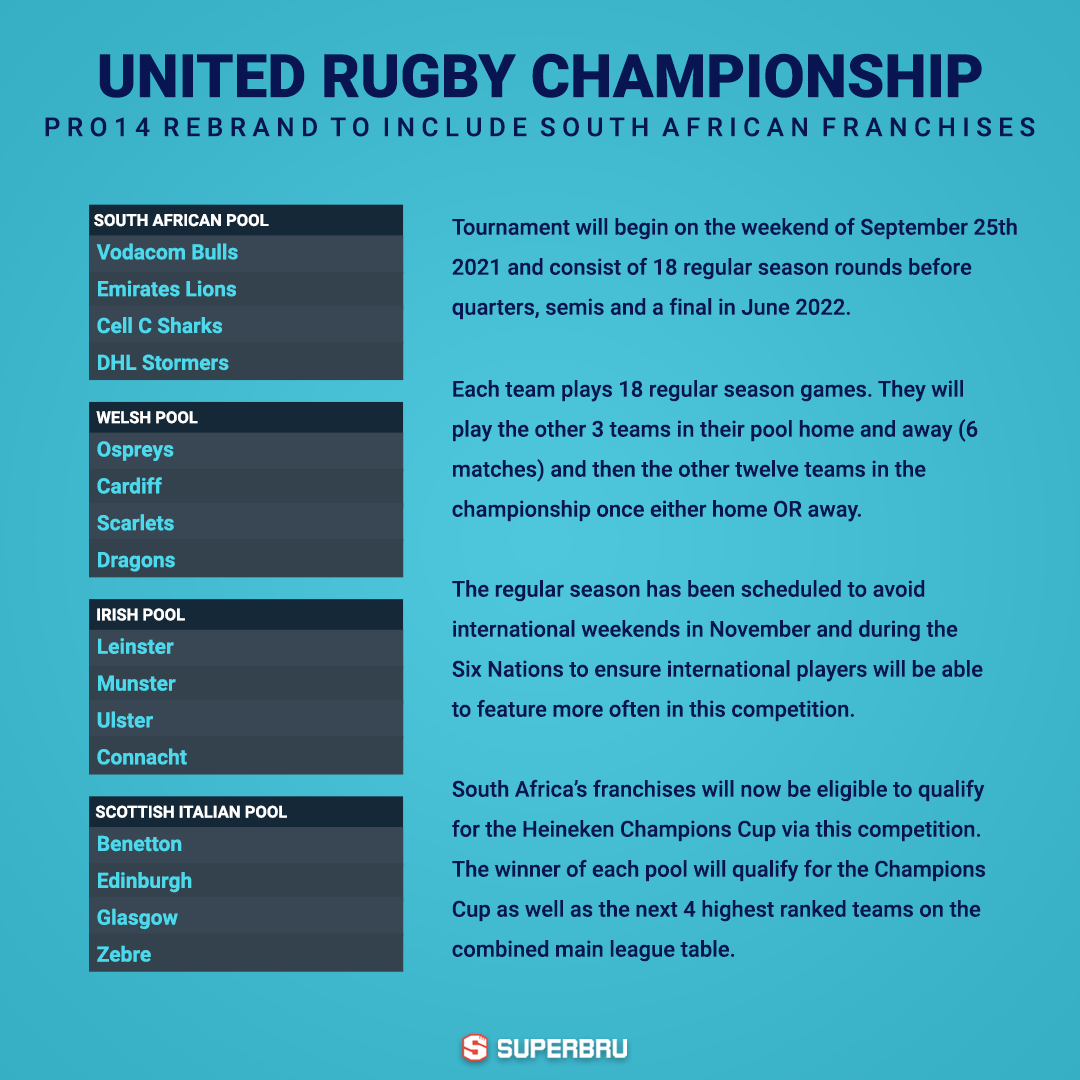 United Rugby Championship: What is it?

The United Rugby Championship (URC) will be a new 16-team league featuring the PRO14 clubs and South Africa's former Super Rugby teams. Named this way because it is uniting teams from the two hemispheres, the URC is set to adopt a format that isn't too dissimilar from previous Super Rugby tournaments and that will remain in place for 'at least the next 5 years'.

What is the format?

The URC will consist of a regular season of 18 rounds before quarter-finals, semi-finals and a final. Each team is therefore guaranteed to play 18 games in each season. As you can see in the graphic above, there will be 4 regional pools - a South African pool, a Welsh pool, an Irish pool and a Scottish Italian pool. Each team will play the teams they share a pool with home and away every season (so that's 6 matches) while they'll play the other 12 teams from different pools once per season either home or away.

This means every team will play each other at least once per season. As well as having the regional pools, all teams will be ranked on a main table of all 16 teams and the top 8 will progress to the quarter-finals where 1st will play 8th, 2nd will play 7th and so on.

This means that at least one South African team is guaranteed to qualify and participate in the 2022/23 Heineken Champions Cup.

In addition to the derby matches taking place in South Africa, every team from the 'North' will play 2 away games in South Africa each season. It is expected that these fixtures will be played back-to-back so that there's just one tour per season for each team. Each South African team will play six fixtures in the North which are likely to be made up of two 3-game tours.

When does it start and what's the schedule like?

The first ever URC season is set to begin on the final weekend of September with the finals to be played in June 2022. A notable thing about the schedule is that rounds will be played around the international windows during November and the Six Nations rather than during said windows meaning international players are likely to be available for a greater number of URC matches. 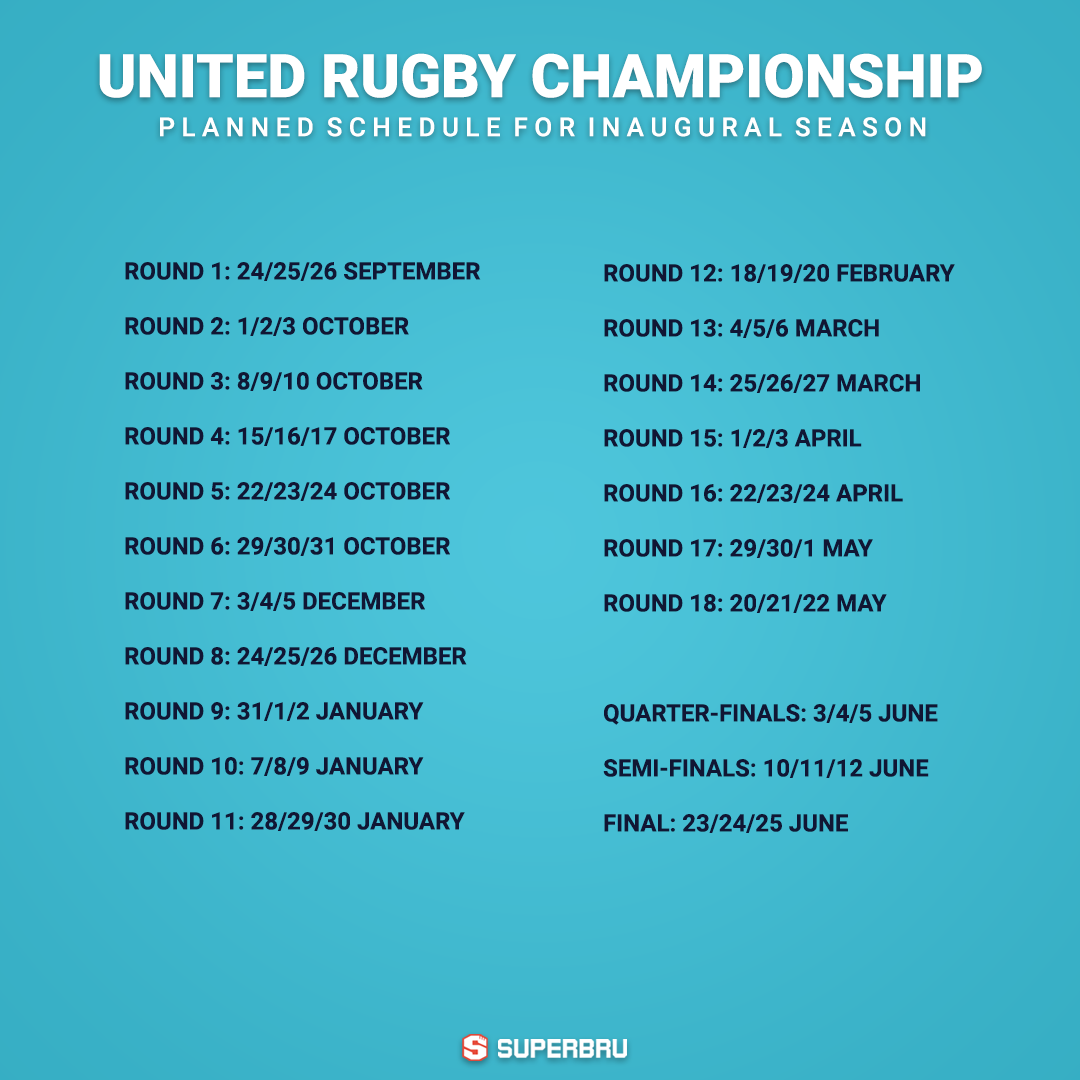 Can I join a predictor game and get cracking on Superbru?

It's still a little early for that but while we're busy making plans for this tournament behind the scenes, we've set up this pre-register page. By clicking 'pre-register' on our URC tournament page, you'll be automatically added to our game once everything is ready and you'll receive an email from us once we're live!

We hope that like us, you're excited for this new tournament which should provide some 'normality' for the teams and fans involved even though it will take some getting used to. If you have extra questions, let us know in the comments and we'll do our best to answer, or you can check out the new site that the URC have launched themselves at unitedrugby.com.
Enjoyed this? Share it!

DreadedRed
20,862 caps
Another example of an entity jumping on the bandwagon of international fame that is United. Not dissimilar to that city in North-Western England calling themselves Manchester, in the knowledge that everyone that matters loves Manchester United. Ah well, imitation is, in effect, flattery.
Report

caplegal
19,611 caps
I saw it rather than usurping the fame of "united" but the adoption of "Rugby Championship" when every right-thinking rugby fan knows that "The Rugby Championship" really is centred on New Zealand. 23 Jun 14:06
Report

DreadedRed
20,862 caps
Beauty, I am told, is in the eye of the beholder. A combination of Manchester United and the All Blacks is beautiful to me. The outstanding teams of our generation(s)! 23 Jun 16:39
Report

Swampy
68,169 caps
From A Northern Perspective, I think this will put some life into the pro 14 which was dying quickly. I do worry about what strength of sides that the Irish teams will send to SA and vice versa. Could well be a home win-dominated tournament. Secondly, I do think that many of the folks in the North got carried away with the Benetton win last week. As good as Benetton was the understrength nature of the Bulls that day shouldn't be overlooked!
Report

DreadedRed
20,862 caps
Yeah Nick, I agree that the addition of 4 good Southern Hemisphere sides should add a lot of value to the tournament. However, I doubt that the S.A. teams will tour with under-strength teams, if the old Super Rugby tournaments are anything to go by. 24 Jun 07:06
Report

Prowler
20,771 caps
Swampy I see it differently. If you compare it to the Super 12, where they added teams to "make it more exciting" they just basically given the Super 12 a death warrant. Once it became to big, beyond 12 teams, it became financially unsustainable. They also focused on local derbies more, because "that is what the fans wanted". It soon became a boring same-old-same-old stale product. And what did Sanzaar do once they realised the Super 14 isn't working. They expanded again, to ridiculous geographic areas in Argentina and Japan. And how did that work out? Just imagine also a team from Belfast or Glasgow playing in Durban when it is 30 degrees and 95% humidity in December. Or in Cape Town in February and it's close to 40 degrees outside? Or worse, at altitude when it's 35 degrees at Loftus and there's no air to breathe in the last 20 minutes. 24 Jun 21:54
Report

goldorak
29,541 caps
Let's hope SA fans embrace it but am not holding my breath, pretty fickle bunch at times. Empty stadiums not a good look.
Report

The Professor
46,897 caps
Will you include a Fantasy game for the URC?
Report

kraai
23,708 caps
Sometimes you have to think out of the box... All of us are used to the old super rugby teams... So why not try something new?If you don't try it you won't know it.. I will certainly be playing and will challange anyone in a pool for the first spot... And open my own pool.. See you there Dreadedred.. ?? 24 Jun 18:49
Report

Prowler
20,771 caps
The only sense this makes is that SA teams now play in the same time zones when they travel. Apart from this, not much else is worth getting excited about. SA teams are again handicapped by the travel. One 2-week tour for European teams vs. two 3-week tours for SA teams. And then SA rugby swapping seasons, now playing rugby throughout the whole summer, then Springboks will feature during the July internationals. Again, player burnout is taking a backseat. And I don't expect South Africans to get too excited. SA fans can relate to the Crusaders, Brumbies, Highlanders, etc. Who has any idea who or what the Ospreys are? Or Zebre for that matter? And then the elephant in the room, the so-called URC is going down the same path Super Rugby did. The one which killed Super Rugby. It's becoming bigger than an elephant. I expect it to last 4 or 5 years before it becomes too expensive and they start cutting back again with SA teams to lose out. Super Rugby has become boring one-way traffic. I don
Report

caplegal
19,611 caps
I wonder if Superbru could get a South African current player, and someone from one of the northern teams to comment on the issues raised and any other concerns. 25 Jun 09:32
Report

Lodie
34,365 caps
Will there be a Fantasy Game for this one?
Report

Willie
26,571 caps
when i want to pre- register for the fantasy i get messages that say technical error 404 or i need to look again later and time is running short. would superbru look it through, please?
Report

TheVikingKing
1,994 cap
Superbru team!!! You legends!!!! Thank you so so sooooo much for the URC Fantasy!!!!!!! :-)
Report
Edition: North America change
Superbru on Facebook
Superbru on Twitter
Superbru on Instagram