Jack  |  Social Media & Communities Manager
Mon 29 Mar 2021
In news that is exciting for all rugby fans but especially those in South Africa, Pro14 have now officially confirmed that their new 'Rainbow Cup' tournament will begin on the 24th April.

The Rainbow Cup is essentially set to be a curtain raiser for next season where the Pro14 is set to become 'Pro16' as the four South African franchises that had been competing in Super Rugby head north to Europe. This means the Rainbow Cup will be an exciting first chance to see some Northern Hemisphere v Southern Hemisphere club rugby as the Bulls, Lions, Sharks and Stormers prepare to take on some of Europe's top clubs including Leinster, Munster, Scarlets and Glasgow. Leinster will be the team heading into this new event with the most momentum after defeating Munster in Saturday's Pro14 final to win a fourth consecutive title.

As was perhaps inevitable given the times we are in, Pro14 have had to slightly alter their initial plans for this tournament that some of you will no doubt have read about when the Rainbow Cup was first announced. Here's all you need to know about how the event will actually play out.

The Rainbow Cup will be made up of 6 'regular season' rounds and a final. All teams will be ranked on a single league table. It's a nice and simple format that will see the top two teams on the table compete in the Rainbow Cup final on June 19th. 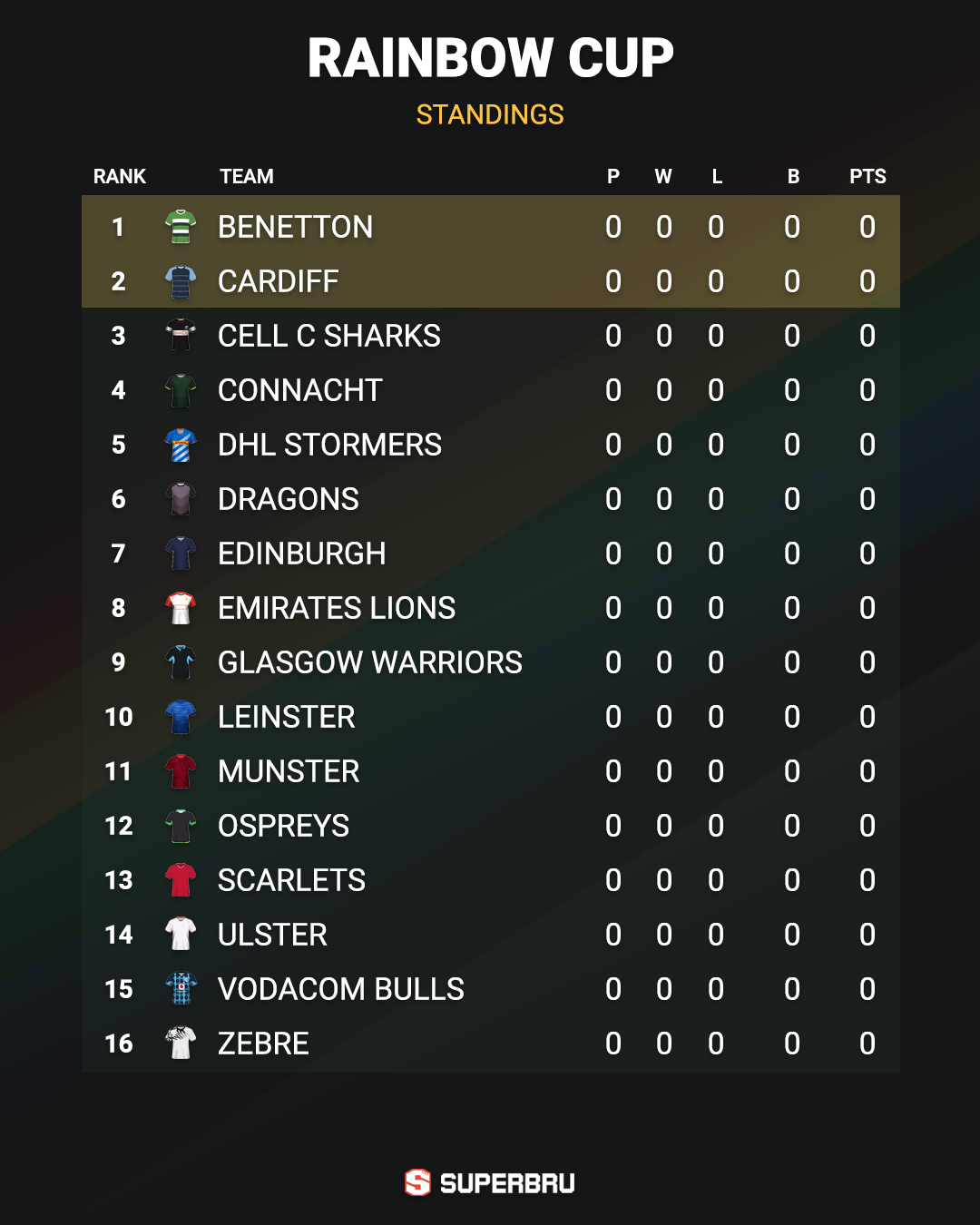 Due to the number of travel restrictions still in place because of the coronavirus, the first three rounds of the tournament will be made up of derbies (yep, we know, plenty of recent 'Historic Results' to go off when making those picks!). However, Pro14 have confirmed that the games in Rounds 4-6 will see the South African franchises play away games in Europe against Pro14 sides for the first time.

It's not yet known exactly what those fixtures will be but we do now have fixtures for the opening 3 rounds. Exact dates and kick-off times are still to be confirmed but you can view the schedule in our Rainbow Cup predictor game which is already live and available for you to join:

You can join our Rainbow Cup predictor now by clicking the + icon in the top right corner of our app's home page and selecting 'Join a tournament'.


In addition to the derbies taking place across Ireland, South Africa and Wales, we will see a couple of 'Scotland v Italy' matchups in Round 1 before the Scottish and Italian clubs meet in back-to-back domestic derbies across Rounds 2 and 3: 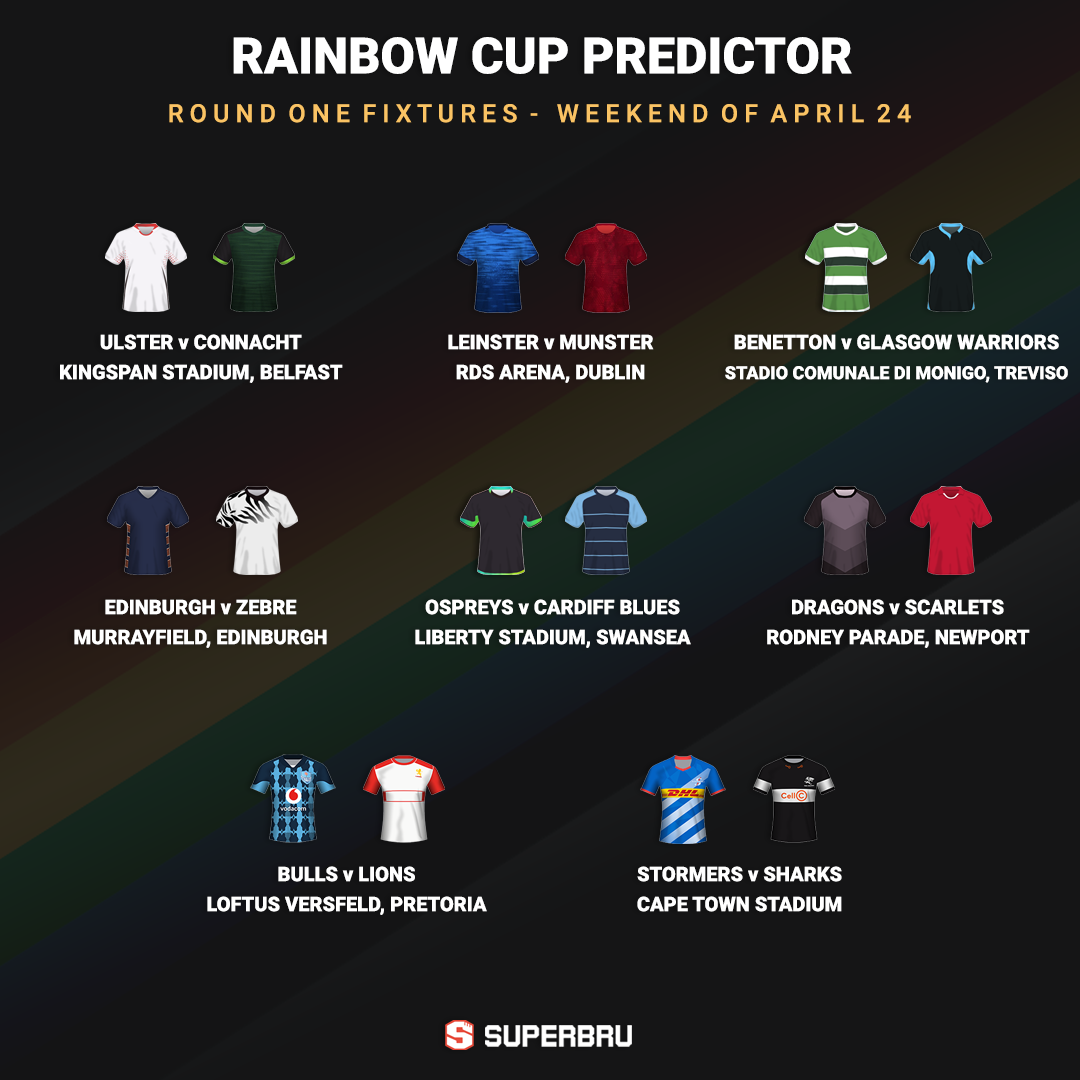 The Rainbow Cup on Superbru

You'll notice when joining the tournament that the opening 3 rounds of fixtures are actually 4 rounds on Superbru but this is just to ensure that the weekly structure is maintained so that it's easier to keep up with your picks - the South African sides are playing their 'Round 2' fixtures a week earlier than everyone else when some Pro14 teams are busy with European fixtures. The schedule has been created in this way to allow the SA teams time to travel to Europe and quarantine when their opposition are completing their Round 3 fixtures.

This Superbru tournament should be a great opportunity to reignite the pool rivalries many of you will have last enjoyed during Super Rugby. We're excited to see how South Africa's teams fare in Europe and it will of course also be very interesting to see some early Lions v Springboks individual clashes in certain games ahead of the tour of South Africa that will start shortly after this tournament.

The predictor game will work just as you're used to in our existing Super Rugby/Pro14 games. GSPs will be in place for each regular season round aside from the 2-match round on May 1st where only South African teams are in action. Superbru Insights will be available in this tournament for Premium brus.

So make sure you join our tournament nice and early and get your friends/pool mates/fierce rivals invited to a pool ahead of kick-off on April 24th. We hope you're as excited as we are to see how this plays out!

You can join our Rainbow Cup predictor now by clicking the + icon in the top right corner of our app's home page and selecting 'Join a tournament'.


Feel free to leave any questions in the comments section. Please note that we will not be running a fantasy game for this tournament but hope to do so for the new 'Pro16' season if and when confirmed.
Enjoyed this? Share it!

TheVikingKing
1,215 cap
The fantasy game for this tournament, will be truly missed. Nothing to add, to a series more than the prediction side added on with quality by fantasy selections.
Report

DreadedRed
17,380 caps
Could be scored in a similar manner to the Superbru Tennis tournaments.

Willie
22,977 caps
Please reconsider continuing with the fantasy game for this tounament. otherwise no value and please reintroduce Major League Baseball as well. I may be new to this but the unavailability of this makes a big void in peoples' yearly eperiences for the view of fun.
Report

DreadedRed
17,380 caps
I have a dream. A fantastical world, oval in shape, filled to the brim with rainbows, yet not a unicorn in sight. A Rainbow Cup Fantasy? Yes please!
Report

Jersey-puller
20,902 caps
Oh dear Angus, been at the banana skins & nutmeg again!? I think the issue with Fantasies is the added cost of getting the Opta stats. If only more Brus played the Fantasies compared to much less braincell burning Predictors it might justify it. Us Fantasy preferers are in a minority it seems. I'm sure once more Brus try it they will get hooked. I find with Fantasy contest matches I watch the whole 80 or 90 mins but with Predictors the highlights will do. 31 Mar 01:15
Report

DreadedRed
17,380 caps
I’m sure you’re right Paul, data for the Fantasy tournaments is costly, and they doubtless require far more Admin. Hopefully the Superbru tournaments will soon be back to the pre-lockdown levels of involvement, and the site’s profitability as well.

The Fantasy tournaments are really enjoyable. Watching matches where your players are involved is usually a thrill a minute. Every metre your player runs, every touch, tackle, offload, line-break, etcetera gains you points and gives you joy! Also, by becoming more aware of the usual input from individual players, one becomes much more accurate in the Predictors. 31 Mar 06:32

DreadedRed
17,380 caps
Banana skins? Didn’t realise they give added value! I’ve been tossing them out for years. Thanks a bunch! 31 Mar 06:34
Report

Jersey-puller
20,902 caps
So it was you putting banana skins in my path! The metaphorical ones that lead me to make last minute prediction & Captain choice changes. Seriously the 4 Banded Fantasies must be a fair bit cheaper for Opta stats (unless they are considered to be in the Public Domain after say 12 or 24 hours then just copy them from WhoScored.com etc?). The Odds-based have around 60 player choices, whereas the full XV or XI versions required full squads times all the teams in each contest, so hundreds! 31 Mar 13:08
Report

The Professor
43,339 caps
Totally agree
We should be appreciative of the fantasy games that superbru incorporate in their schedule as the costs are exorbitant with time and effort required for the capture of all the data for every individual player
Report
Edition: North America change
Find us on Facebook
@Superbru on Twitter