Jack  |  Operations & Media Manager
Tue 26 Apr 2022
Though we’re in a FIFA World Cup year, the climate in the Middle East means we’ll be waiting a little longer than usual for the headline sporting event of 2022.

However, while we wait, we are fortunate to have some high quality international football happening this summer regardless as a fresh UEFA Nations League campaign begins in June. Now that we’ve had time to experience a couple of editions of the Nations League since it begun in 2018, we’re excited to be launching a Nations League Predictor for the first time this summer.

In what should be a great warm-up for the World Cup - as well as becoming an increasingly significant tournament in it’s own right - the Nations League sees the top European nations go head-to-head in competitive matches. Since it’s fairly new (and slightly complicated in some ways!), here’s an explainer on what the Nations League is and what the format of our first ever Nations League Predictor will look like.

For those of you that could do without a long(ish) read and just want to know if it’s worth setting up a pool between Premier League seasons - think of it as a mini Euros with 4 rounds to pick in the first half of June and a couple more taking place in the first international break of the new season this September.

Created to ensure there were more meaningful matches taking place during international breaks rather than endless friendlies outside of major tournaments, the Nations League is a biennial competition that involves all 54 UEFA men’s national teams.

These teams are divided into four divisions (called ‘Leagues’ which is arguably confusing within the ‘Nations League’ itself) with these divisions seeing nations ranked among teams of a similar quality. Since promotion/relegation is in play at the end of each tournament, it’s technically possible for a team in League D to get themselves all the way up to League A and to try and become champions. The Nations League also provides an additional route to qualify for the Euros meaning there’s further reason to take things seriously.

The current structure means there are 16 teams in Leagues A, B and C with the remaining 7 teams in League D. Within each of the top 3 leagues, teams are divided into 4 groups of 4 meaning each League is essentially a tournament in it’s own right, separate from the other divisions.

There are 6 rounds of fixtures in every division - this year will see 4 rounds take place in June with the other 2 in late September. In the top division (League A), the winners of the four groups then go on to play in the Nations League Finals which is also treated as a separate event and won’t be played until the summer of 2023.

The first edition in 2018-19 saw Portugal crowned champions after defeating the Netherlands in the final while France won the second edition in 2020-21 by beating Spain.

Now, the key thing within the above explanation of the ‘Nations League’ as a tournament is that it is essentially lots of leagues within a 'league'. League-ception, if you will.

Since this will be our first Nations League Predictor, we’ve decided against creating a monster game consisting of continuous 27-match rounds across all of the leagues this summer, and will instead be focused upon the top division, League A. 8-match rounds tend to work quite nicely on Superbru, especially when there are clear start and finish lines, meaning the Predictor will only cover the league stage and will not include the Nations League Finals that take place as a separate event next summer.

So this means we’ll have a 6-round tournament where you’ll need to pick 48 matches in total between Europe’s top men’s national teams. You can check out the groups in League A below: 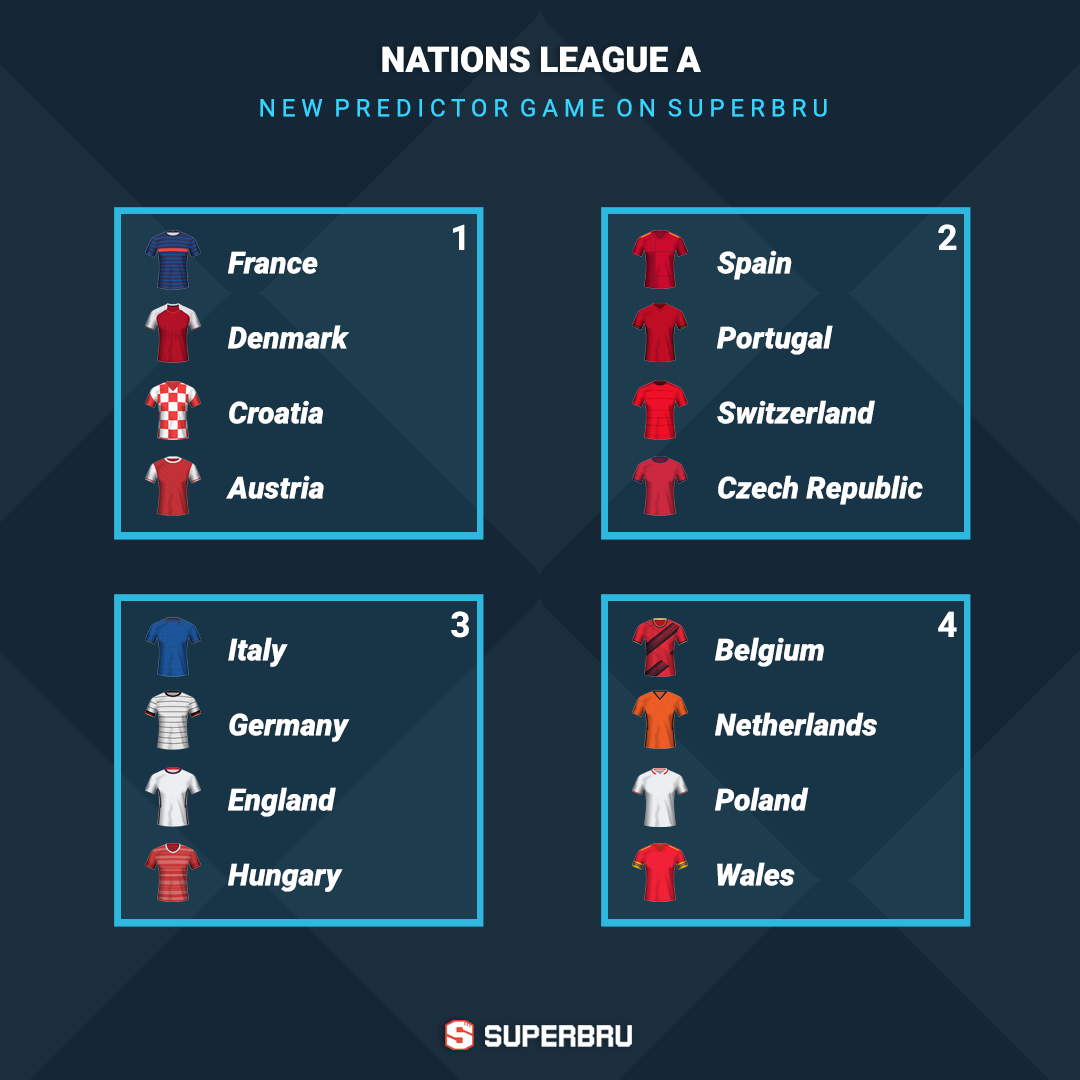 The opening match of the tournament is expected to be Poland v Wales on June 1st with Spain v Portugal then scheduled for the following day. For the first 4 rounds, we’re set for daily action between June 1st and June 14th with 2 matches taking place most nights.

As a fairly new competition, it will be interesting to see how the Nations League continues to evolve (there’s even talk of CONMEBOL joining in a couple of years) and we will of course keep an open mind as to how this Predictor game might evolve as well given the potential for expansion.

We hope to have plenty of you giving the Nations League Predictor a go this June, if you have any questions feel free to drop them in the comments. Also, if you’re a Superbru Premium user, there will be Insights available for each match.

Jersey-puller
25,716 caps
As much as I applaud SB leveling up the number of Football contests vs Rugby Union ones I don't know if I'll play.

As a Kiwi England supporter I'd rather save my picking energies for bigger contests. It never caught the UK public's imagination IMHO. Its not very labour intensive for picking and the way lucky exacts can move you up by the end should see it appeal to the more 'casual' Bru. The same goes for the Golf, though a proper Golf expert can still prevail.

Can't we have more 'hardcore' contests that reward research and tactical thinking to test us better and minimise luck deciding the Global Top 10s? Such as MORE CYCLING! The Giro starts on May 6th btw. I realise Cycling is a lot more admin due to the many ways many riders get daily points but its so intense & that much more FUN! Some Rugby Fantasies attract similar numbers & are almost as complicated for data processing btw.

But saying this, its still great that SB are adding more contests in general to offer more choice.

waratahbre
22,101 caps
I'd love to see a contest that runs for, say, 10 weeks and every weekend there are 10 random matches to pick from random sports from that weekend. It could be an EPL match, a Currie Cup match or even a top runscorer in an ODI cricket match. The matches selected could even be a 50/50 match that would require a bit of skill to select the winner. 27 Apr 20:56
Report

The Professor
53,893 caps
I too miss the cycling
On the other hand looking forward to the Commonwealth games. There were no Winter games so i assume SB make all the Commonwealth SB members happy . 3 May 09:06
Report

Liverpool 1977
7,090 caps
I would like to see in football competitions maybe 1pt for result 2 points for close and 3 points for exact I think that would be perfectly fare hope it happens because then the pools will be more open and exciting
Report

James
56,495 caps
Thanks guys, always love it when the big boys play and now we don't have to wait so long for super thinking. I'm already at a loss for the Portugal Spain game. Head one way heart very much the other :)
Report

The Professor
53,893 caps
Great idea but far too much work involved for SB to even consider 3 May 09:09
Report

bravedogg
5,302 caps
Any prizes to be won?
Report