Hutch  |  Commercial Director
Fri 21 Jan 2022
This weekend sees the South African teams finally returning to URC action, whilst there’s a round of the Heineken Champions Cup as well.

Here are my Rugby predictions for this weekend. 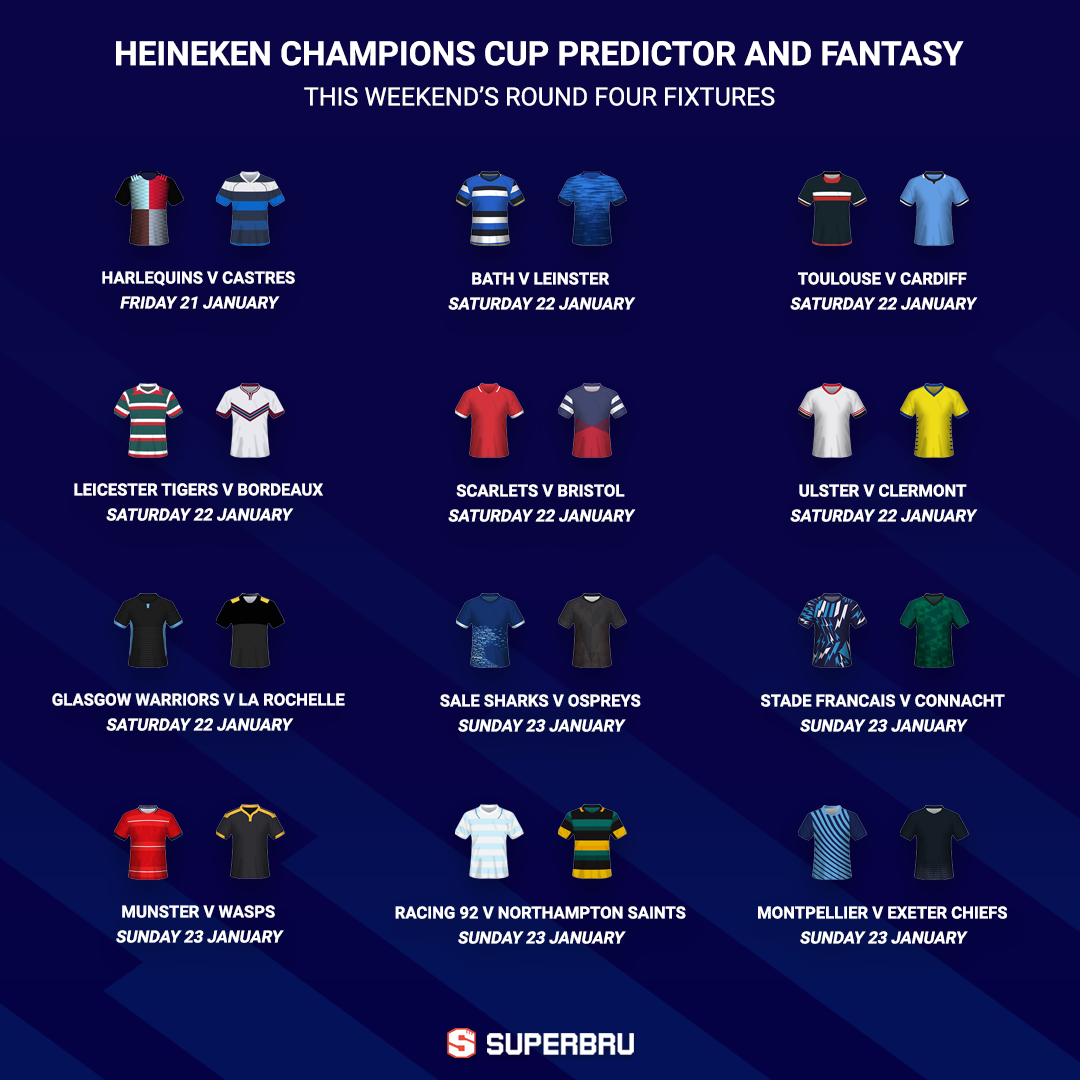 This should be a comfortable home win for Quins, who are going well in Europe so far, against Castres who are already out. Harlequins by 13

Bath are still struggling this season, and when you’re in a slump, Leinster is unlikely to be your first choice of visitor. Leinster by 23

The French came unstuck against Wasps last weekend, but this should be straightforward enough back at home. Toulouse by 18

This is a tough fixture, but you can’t pick against the Tigers at home, given the season they are enjoying so far. Leicester by 8

Given that they won the reverse fixture and haven’t lost in Europe since, you have to pick Ulster at home here. Ulster by 7

Bristol can squeeze through to the knockouts with a win here, whilst the Scarlets are out, so that extra motivation should be enough for the away win. Bristol by 5

This is a really tricky one that could go either way, and so I’m leaning towards home advantage against the travelling French side. Glasgow by 4

This should be easy enough for Sale against the disinterested Ospreys. Sale by 16

Connacht were convincing winners of the first match between these teams, but travelling to Paris is a different challenge. I’m tentatively picking a home win. Stade by 4

This is a nice easy one in Paris, Racing should win at a canter. Racing by 23

Wasps gave themselves a chance of qualifying, and a losing bonus point would help their chances of finishing in the Top 8, but it will be a tall order. Munster by 9

The French team were embarrassing at Leinster last week, losing by no fewer than 82 points. They deserve to be beaten here too. Exeter by 8

Meanwhile, the United Rugby Championship continues this weekend with two South African derbies, where the prize is a place in the Heineken Cup next season.

The Sharks have had the upper hand over the Lions recently, and even though it will be different personnel, if the hosts’ performance in the Currie Cup in midweek is anything to go by, the Sharks should take this. Sharks by 8

The Stormers haven’t won at Loftus since 2017, and even though the Bulls have struggled in this tournament so far, they should win this against a very familiar foe. Bulls by 8

The Gunslinger
4,204 caps
Good luck with your picks
Report

budgie
1,182 cap
The Sharks performance midweek was dismal, but they should take it as they have a whole new line-up this weekend.
Report

TheVikingKing
3,261 caps
Big Harlequins fan but Castres were robbed by Mike Adamson (Ref) of an away win. An Castres is not the first team to have this happen to them, at the hand of Mike Adamson. Hands down and easily worst rugby referee in the world!
Report

Hennie
8,027 caps
Fantasy - I know it's the same for everybody, but the games postponed after the round have started really creates problems. There's not an easy way out of this, but what about increasing the number of players on the bench [double up], just to accommodate this problem? Players not playing are substituted by bench players. The problem is if your starting player's game is postponed and the bench player as well. Just asking.
Report

DreadedRed
27,849 caps
Hey Hennie! As you say, no great solutions to the late cancellations. Your idea (two subs per position) is a good one. Even with that modification, some brus will have players that score zero, but less often. Superbru do add transfers to the quota, if games are cancelled prior to the first match, which helps.

Personally, I believe that no additional transfers should be added, and no extra subs. We don't need to field 15 players. We need to score as many points as we can, within the parameters set. Adding transfers (and possibly subs) mainly helps the brus that don't plan well. In this week's round, I would have been able to field 15 players without doing any subs, but received no benefit for my careful planning.

In these troubled times, I usually try to ensure that all 4 wingers (all 3 centres, etcetera) come from different matches. Mostly I pick key players from early matches, which are less likely to be cancelled. Pre-covid, I'd usually pick subs that were likely to play the foll 24 Jan 15:29