Coming up this month on Superbru: June

Jack  |  Social Media & Communities Manager
Thu 3 Jun 2021
Happy June everyone, I hope you're all doing well. May, and the many club finals it brought us, is now behind us so congratulations are in order for Villarreal winning the Europa League (what a shootout that was!), Chelsea winning the Champions League for a second time, Montpellier winning the European Rugby Challenge Cup and Toulouse winning the Heineken Champions Cup.

There were of course a lot of Superbru tournaments ending last month so rather than going through all of them, I think it's better to just move on and look straight ahead at this month because it's set to be a very big one! For the first time in 3 years, we have a major international football tournament to look forward to this summer with the Euros now just over a week away!

It's far from just the Euros this June though as we have a number of tournaments starting very soon which I'll be running through below. As usual, if you have any questions about any of them, feel free to ask in the comments!

Technically, our new Test Cricket fantasy game was the first of this month but since that's already started with yesterday's opening day at Lord's between England and New Zealand, let's kick-off with State of Origin... 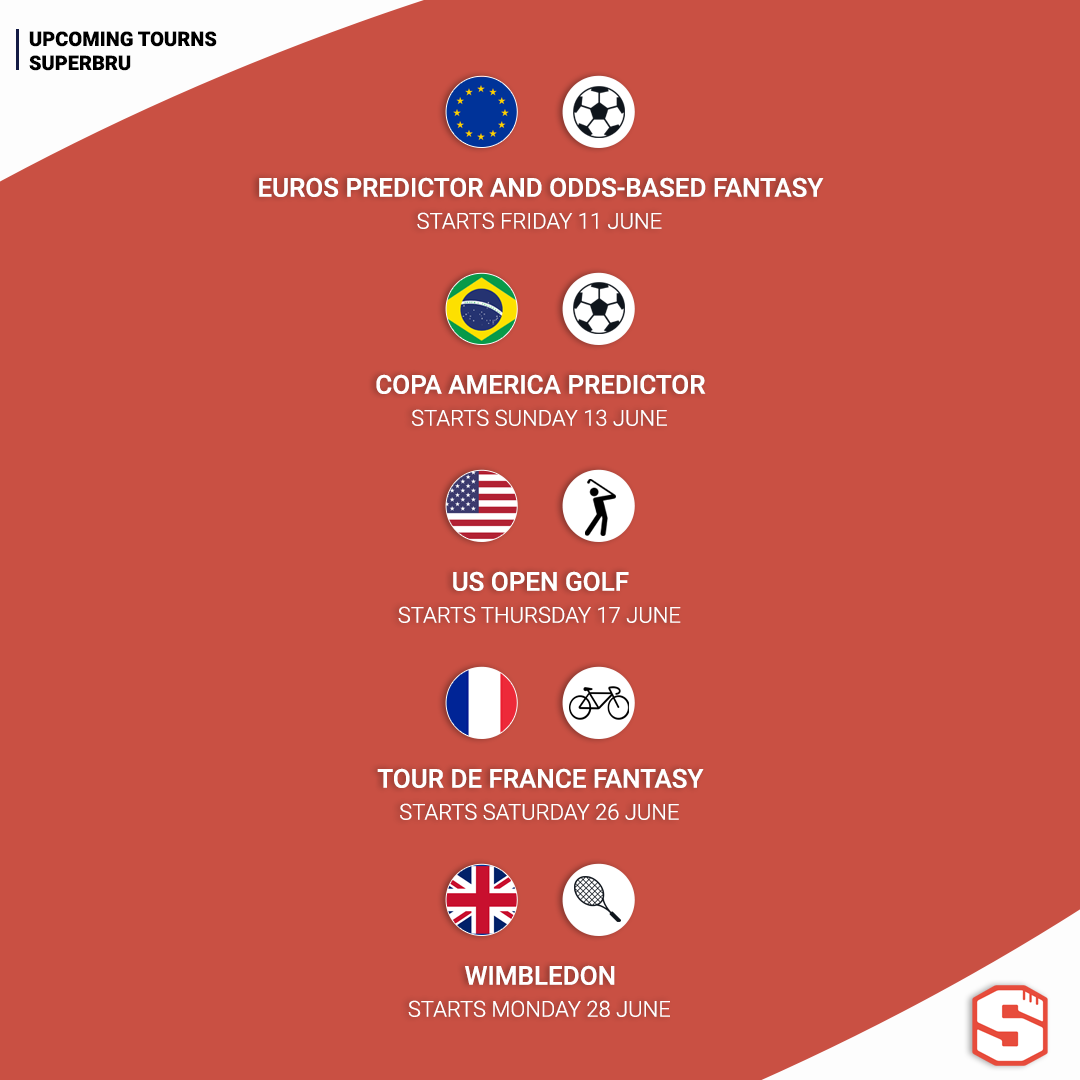 One of the shortest tournaments we run on Superbru with just 3 picks to make! As those of you who enjoy our NRL tipping game will likely know, the annual best-of-three State of Origin series between New South Wales and Queensland begins on June 9th. Queensland won the 2020 series 2-1.

The Euros begin next Friday when Turkey face Italy in Rome. There'll be additional preview content for the Euros in the coming days as well as what you may have already seen on any of our social media pages so I'll keep it brief here but it's fair to say we're all very excited for the tournament!

Slightly surprisingly given the pandemic, UEFA are pushing ahead with their plan of this being the first Euros to be hosted by numerous cities across the continent but the semi-finals and final will be held at Wembley in London. In addition to our predictor game, you can join our Odds-based fantasy game which has the fresh format we introduced and enjoyed for the Premier League and Champions League seasons that have just finished. Picks for Round 1 of the Odds-based fantasy game should be open by this weekend.

It's hard to look beyond world champions France as the favourites for this tournament, though the other major contenders are widely considered to be Portugal, Belgium, Germany and England.

Well, we haven't been short of news in the build-up to this one! 2 days after the Euros begin, South America's equivalent gets underway. The tournament was due to be co-hosted by Colombia and Argentina this year, but things have changed quite dramatically. CONMEBOL stripped Colombia of their hosting rights due to civil unrest in the nation meaning Argentina became outright hosts, but Argentina themselves have now also been deemed unable to stage the competition due to their struggle with the pandemic.

At the time, that meant the Copa America was without a host nation with 13 days to go and a postponement looked likely, but CONMEBOL have now decided 2019 hosts Brazil will stage the event despite Brazil being a country that has also massively struggled with the pandemic and indeed civil unrest against the government as a result.

Host country drama aside, it should make for a good tournament on Superbru and there'll be some great matches to watch (if you're in the UK, the BBC are showing all of the games live). Brazil are considered favourites, particularly now they're hosts, while there'll obviously be lots of attention on Messi and Argentina once again as he looks to win a major tournament with his country.

Next up we have some golf as this year's US Open begins on June 17th at Torrie Pines. Phil Mickelson was the surprise winner in the last golf tournament we covered, the PGA Championship, while the 2020 US Open winner was Bryson DeChambeau at Winged Foot Golf Club. You can join the tournament now and create your pools. Picks will be open a little closer to the time.

As mentioned in last month's article, the Tour de France will be our first fantasy cycling tournament of 2021. Colombia's Egan Bernal (Ineos Grenadiers), who was victorious in the 2019 Tour de France, has just won the Giro d'Italia but Bernal will not be competing in this year's TdF with Tadej Pogacar the current favourite with the bookies. Ineos are expected to be very strong as usual with Geraint Thomas, Tao Geoghegan-Hart and Richard Carapaz likely to be involved, while some of the many other names to look out for include Primoz Roglic and David Gaudu.

Lastly, though we're all still busy making picks for the delayed French Open at the moment, Wimbledon isn't far away! After being cancelled in 2020, it'll be fantastic to have the grass court major back again this year and things are all set to begin on June 28th.

In the most recent Wimbledon tournament (2019), Novak Djokovic and Simona Halep were champions.

As for this final 'AOB' section that I tend to add, there seems to always be a little cricket update for everyone and this month it's that the Pakistan Super League will resume on June 9th. Following the postponement mid-season earlier this year, there have been various vague news updates about the tournament being completed in the UAE and everything has been left quite late but the PSL has now officially confirmed a schedule for all of the remaining games and that they will be played in Abu Dhabi. Our predictor tournament has been updated to reflect the new schedule.

The IPL remains postponed without a new schedule for the time being but it is expected that the tournament will resume in September.

Also, we've understandably had a few of you get in touch about F1's introduction of a 'sprint race' as a form of qualifying for select races in this year's calendar. Since the first such race is the British GP in mid-July, we'll add another note about this in next month's article, but for this season there won't be a dramatic change in how our predictor game works. Our game already asks 'Who will start the race in pole position?' for your first pick and this pick will simply become a question of who wins the sprint race qualifying for such races as the sprint race winner will start the actual GP in pole.

Depending on how the new format goes and whether or not it is considered successful enough for F1 to opt to continue with sprint races as a form of qualifying in 2022, we'll then consider changes to our predictor game in line with sprint qualifying where required.

Good luck to you all with your picks this month and keep safe out there!

Jersey-puller
22,114 caps
Not that optimistic the Copa America will last beyond 2 weeks? Though Bolsonaro won't get care how many extra deaths it causes if it boosts his popularity. "Give them bread & circuses and they will never revolt" Juvenal, Rome circa 100 AD . "Covid & Passion were always the fashion at the Copaaaaa! Don't fail in heaaaaallltthh..." (Barry Manilow 1978, well sort of).
Report