Jack  |  Social Media & Communities Manager
Tue 13 Apr 2021
Last week's Champions League Quarter-Final first legs saw two home wins and two away wins meaning we're heading into this week's second legs with relatively clear favourites in each tie, at least in the sense that there is a team with a lead to protect in every match.

The most surprising first leg result was PSG's 2-3 win in Munich - just 7% of you backed Paris. Despite conceding 26 chances while creating just 6 of their own, Paris picked up 3 away goals thanks to a brace from Kylian Mbappe while holders Bayern will no doubt have been left wondering how many of those 26 would have been tucked away by Robert Lewandowski.

Lewandowski remains out for Tuesday's second leg - you can read the other notable team news and form guides for that match and each of the other three quarter-finals, below. 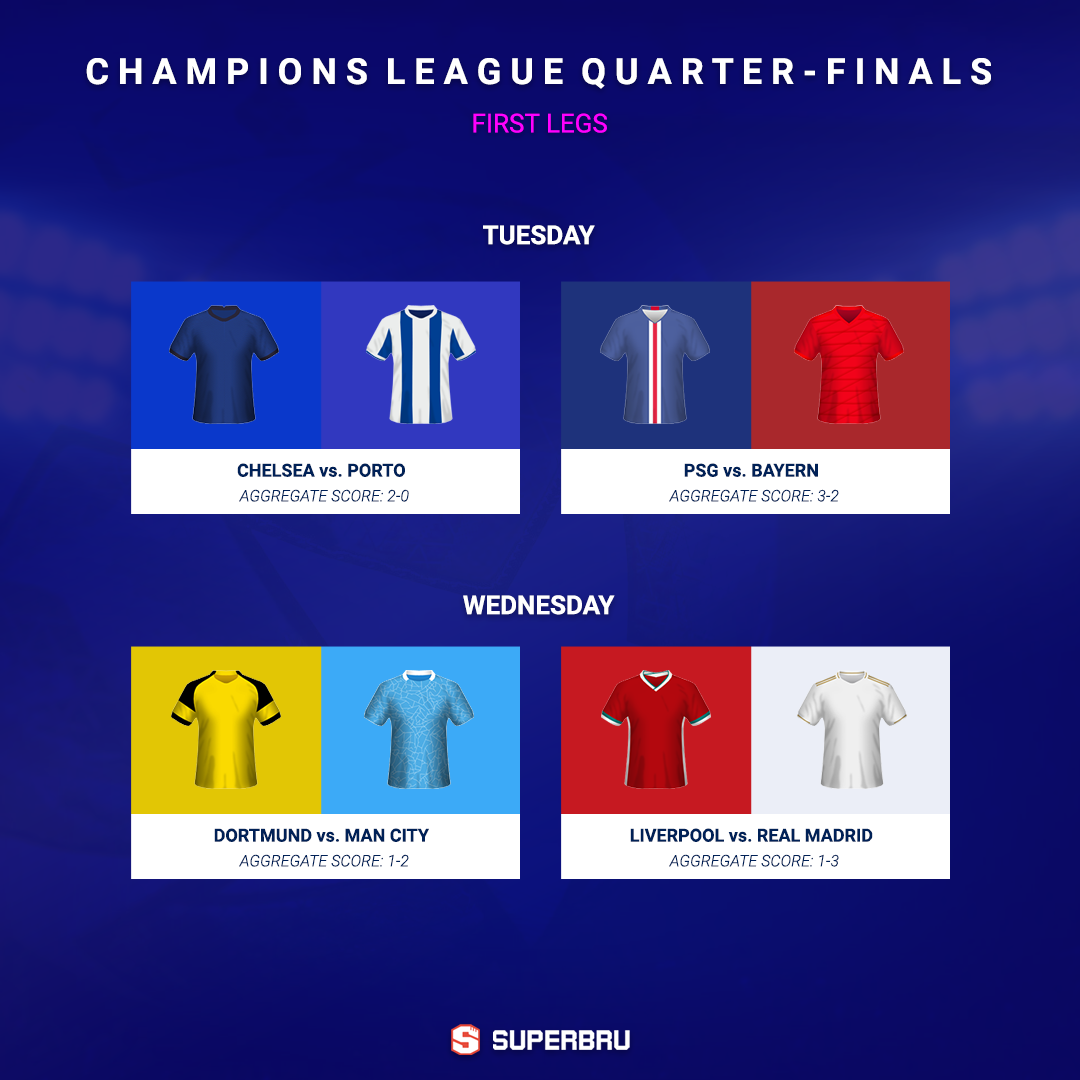 We start with the tie that looks the most settled following last week's action, though you can of course never rule out a comeback in the Champions League. Chelsea put in an impressive performance in Seville (where this second leg will also be played), picking up a near perfect scoreline for an 'away ' leg with 2 away goals.Though Porto were far from outplayed, they will need to create far more clear cut opportunities in this second leg if they're to progress, but will attempting to do that cost them their compact defensive shape and this tie?

Chelsea: Thomas Tuchel's Chelsea looked to have gained a lot of confidence from that first leg result as they battered Crystal Palace in the Premier League on Saturday. The biggest win of Tuchel's reign so far in terms of margin, Chelsea won 1-4 at Selhurst Park with Kurt Zouma, Christian Pulisic (2) and notably Kai Havertz on the scoresheet. The Blues looked to have a lot more purpose with the direct goal threat Pulisic provided in place of Werner in the Left Forward position so that's something to look out for when the team sheets drop tonight.

Team news: Andreas Christensen could remain out but has been named in the travelling squad.

Porto: As was noted ahead of the first leg, Porto were without two key players in their first outing against Chelsea as Mehdi Taremi and Sergio Oliveira were both suspended. Both players were rested ahead of this second leg in Porto's 0-2 win over Tondela in Liga Nos on Saturday but both came off the bench in that game with Taremi getting himself on the scoresheet soon afterwards. Though most of the spotlight will be on those two players and Marega going into this game given Porto's need for goals, the central defensive duo of Mbemba and Pepe will again need to perform well under pressure since we can assume Porto's best chance of winning will be through either drawing Chelsea out and hitting on the counter attack, or, set pieces.

Team news: With Taremi and Oliveira back, Porto look to have a full squad.

Opinion: As long as Chelsea don't get complacent, they should be fine here. They'll have most of the ball, are likely to score at least once and should be cautious defensively from the off given the current tie situation. 2-1

As outlined in the intro, we saw an incredible game in a Munich blizzard last week with PSG running away with a crucial lead and 3 big away goals. The pressure is on the current champions to turn this around in Paris, but just like the first leg, they've named a squad that is missing a few key players.

PSG: PSG continued their goalscoring form at the weekend with a 1-4 win over Strasbourg as Mbappe, Sarabia, Kean and Paredes found the net. Neymar was forced into a rest ahead of this second leg as he was suspended. Both Verratti and Florenzi could be back in contention for this game following their isolation and if fit to start, we'll likely see Verratti come in for Pereira. We're used to seeing PSG try and play on the front foot and that'll likely remain the case in this game given that most expect Bayern to score at least once even without Lewandowski. Even if the gameplan is to be much more reserved and make fast breaks, as we saw in the first leg, PSG can do that very, very well thanks to the dribbling ability and pace of Neymar, Mbappe and Di Maria.

Team news: Bernat remains out. There are question marks over Icardi and Marquinhos.

Bayern: Bayern remain 5 points clear at the top of the Bundesliga but were held to a draw by Union Berlin on Saturday after naming a team that showed they understandably had one eye on this tie as a priority. The travelling squad for this match has been named and features Leon Goretzka who was a doubt but as the team news section below shows, many big names are still out. Bayern are unbeaten in their last 17 away matches in UEFA competitions but their most recent loss way back in 2017 came in Paris.

Opinion: I don't mind saying that I honestly have no idea what will happen here after that first leg. Given how many chances Bayern created, I understand why plenty will back Bayern for a turnaround but the safer pick now looks like PSG to me just because of how devastating they can be on the counter. It feels like Bayern could settle into the game, start to dominate but then just get knocked back by Mbappe racing through to score once again. 2-1

The first leg between these two was an entertaining one with some very high quality play and a couple of controversial referee decisions. Dortmund will have felt particularly aggrieved with Jude Bellingham's goal being wrongly ruled out but they got their away goal in the end thanks to Marco Reus. Manchester City's late winner through Foden gives them the edge going into this second leg, but Dortmund remain in within a chance.

Dortmund: BVB followed up that first leg with a typically high-scoring Bundesliga match as they defeated Stuttgart 2-3. Bellingham and Reus were both on the scoresheet with Ansgar Knauff, who made a surprise start in the first leg of this tie, the other player to score. Most expect Dortmund's away goal to be cancelled out by Manchester City meaning they'll likely need plenty of goals themselves in this second leg which admittedly doesn't tend to be a problem for them, particularly at Signal Iduna Park. We saw Haaland and Reus combine nicely at the Etihad and Jadon Sancho has returned to training meaning there's an outside chance he could join them in attack.

Team news: Moukoko, Witsel and Zagadou are out.

Manchester City: Surprisingly, Manchester City have lost since the first leg as they were beaten in the Premier League by Leeds on Saturday. Less surprisingly, City dominated the second half against ten men in terms of possession and territory but they were caught on the counter late on by Stuart Dallas meaning they suffered just their second loss in 29 games across all competitions (the other 27 were all wins). Of course, that overall record means they remain in very good form and are still quite clear favourites as they head to Germany but it's not ideal to have even slight defensive doubts when up against Erling Haaland.

Team news: Laporte has had a knock but is reported to have trained ahead of this match. Dias and Stones is the likely central defensive partnership anyway.

Opinion: I think there'll be a few calling an upset here and backing Dortmund and while I can picture that simply because of City's recent UCL failures, I still think they were professional and composed enough in that first leg following the Reus goal to keep faith with them. City are very likely to score at least once so Dortmund have it all to do - there should be goals! 2-2

Real Madrid managed a comfortable home leg victory in this tie as Toni Kroos in particular brutally exposed the flaws of Liverpool's high backline without their first choice centre backs. Jurgen Klopp's selection of Naby Keita in midfield was also criticised (he's unlikely to start this second leg) and we'll surely see a switch in approach from the Reds in this week's game if they're to stand a chance of progressing.

Liverpool: The good news for Liverpool is that they've finally managed to end their horrendous losing streak at Anfield before this fixture. The Reds came from behind to defeat Aston Villa 2-1 on Saturday with goals from Salah and Alexander-Arnold. That result still means it's been 7 home games without a clean sheet for Liverpool though and if Real Madrid score in this game then they will of course need 3 themselves just to take it to extra time.

Real Madrid: What's the one result Real Madrid could perhaps enjoy more than a 3-1 home win over Liverpool in the Champions League? Winning El Clasico and that's exactly what they also did this past weekend. Real's 2-1 win over Barcelona on Saturday was a great game to watch in terrible conditions as the hosts hurt Barca on the counter and found two goals through a lovely finish from Karim Benzema and a slightly fortunate deflected free-kick from Toni Kroos. Despite the continued absence of some big players, Real Madrid will have a lot of confidence when they turn up at Anfield, particularly as it will be an empty Anfield.

Team news: Raphael Varane, Sergio Ramos and Eden Hazard are all missing from the squad.

Opinion: It's not impossible Liverpool turn this around but I think the lack of fans greatly reduces their already slim chances. If Klopp was going to change his high backline I really feel like he'd have done it by now because it's been hurting them all season but that means the quarter-back style passes from Kroos will remain a problem. I don't think we've seen Liverpool clinical enough in front of goal in this calendar year to back them. 1-1
Enjoyed this? Share it!

Leandro
1,013 cap
Semifinal is RM vs Chelsea and psg vs mc
Report