Jack  |  Social Media & Communities Manager
Tue 6 Apr 2021
We have a lot of high quality European football to enjoy this week and it all starts tonight as the Champions League quarter-finals get underway where we have 4 very interesting ties coming up.

When the draw was recently made, the immediate reaction was obviously focused upon the fact that the three tournament favourites, Bayern, PSG and Manchester City are all on the same side of the draw. That means Real Madrid, Liverpool, Chelsea and perhaps even Porto will see this as a huge opportunity to make it to the final but now that we're just hours away from the action, it's time to focus on the specifics of each game before making some Superbru picks.

As many of you will already know, we've had some pretty significant injury news from a lot of the clubs involved in the past week or so! If you haven't had time to do your research before making some predictions and odds-based fantasy picks, here's mine to have a read of. 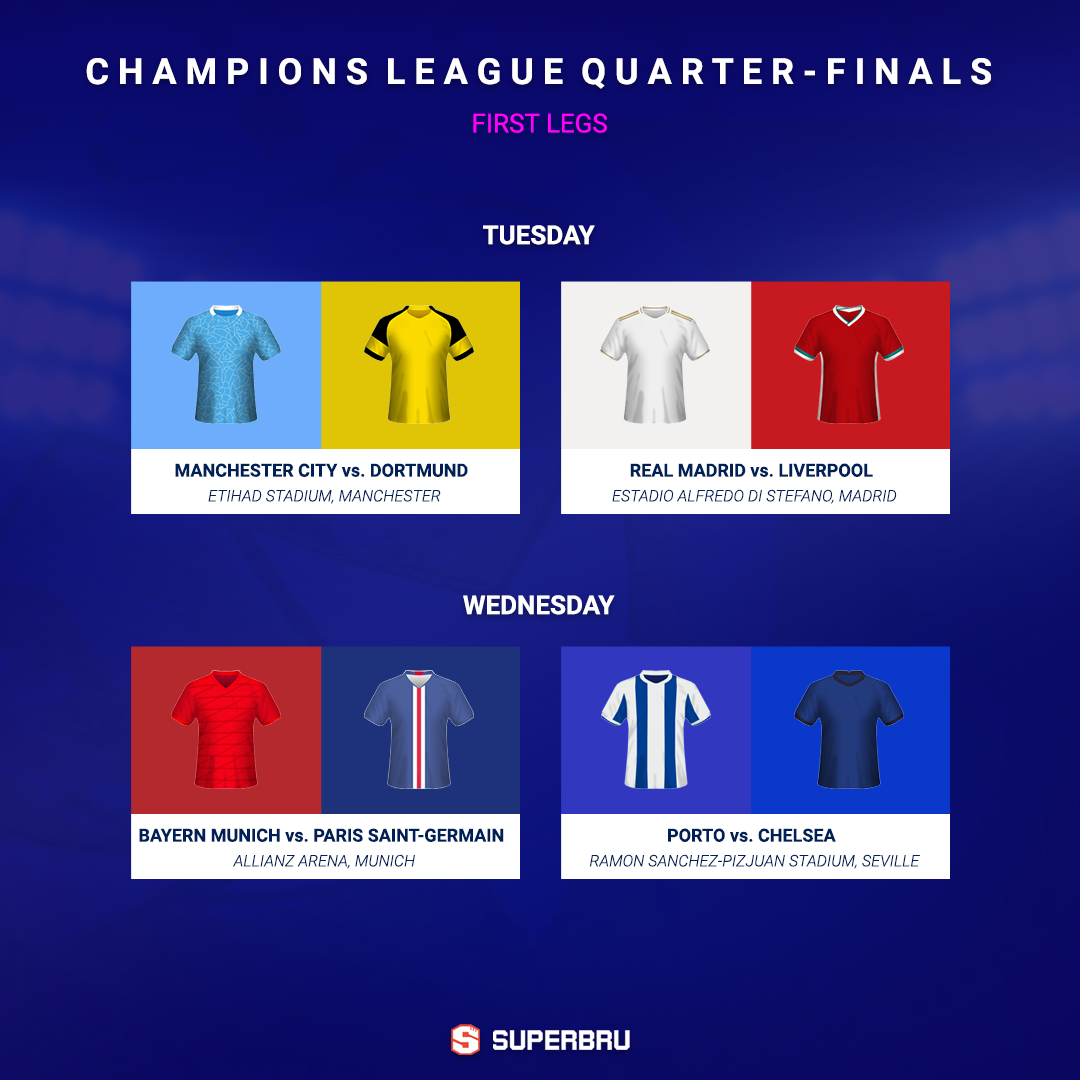 City go into this tie as the clear favourites and it's hard not to feel a little sorry for Dortmund who will have to face either PSG or Bayern even if they manage to make it through this tie! Erling Haaland is of course the main man for BVB and if the Bundesliga side are to pull an upset in this one, it's likely he'll be a major factor. Haaland's Champions League goal record is incredible and off the pitch, his father and agent have already begun a European tour of the mega clubs (including City) to chat about how much money will have to be paid if they'd like him this summer.

Manchester City: City are well on their way to another Premier League title after a solid 0-2 win over Leicester City on Saturday. Guardiola's team are 14 points clear of Manchester United at the top, have reached the FA Cup semi-finals where they'll meet Chelsea and also still have the League Cup final to look forward to against Spurs. Talk of a quadruple this year continues, but as always, this is the trophy that will be the most difficult. Until they win it, we'll keep hearing about City having to overcome the mental side of the game as well as their opponents on the pitch after several disappointing eliminations in recent years. This season, City look as good defensively as they ever have under Guardiola which could be the difference as they're always strong in attack.

Team news: City look to have a fully fit squad.

Borussia Dortmund: Dortmund did very well to progress against Sevilla in the Last 16 but a 1-2 Bundesliga defeat against Frankfurt on Saturday was a reminder of the inconsistency we often see from BVB. Defensively, you certainly don't feel confident about Dortmund ahead of a tie like this (they've conceded twice in 4 of their last 5) and it seems unlikely they'll be able to put together the near perfect performance required over 180 minutes to advance to the semis. However, when you've got as many strong attacking players as Dortmund have you always have a chance and in this first leg, an away goal will of course be important. The last team to keep a clean sheet against Dortmund was Augsburg way back in September.

Team news: Dortmund are without a few key players for this first leg as Witsel, Zagadou and Sancho are all out. Schmelzer and Moukoko also won't feature.

Opinion: I can only really see City winning this but I'm unsure about the scoreline! Dortmund always score but City have been very good defensively and I think the extra effort the visitors will therefore have to make in order to find the net could well leave them even more open than usual. 3-1

This should be a very interesting battle between two European giants that have each had underwhelming seasons so far. Real Madrid have somehow reached this stage (as they so often do) despite a very poor group stage while Liverpool have looked fairly strong in this competition and appear to be returning to form after a terrible domestic run over the past few months. This tie looks very tough to call.

Real Madrid: Despite having a strange season with some notably bad performances and results, lineups that just don't look as scary as Real Madrid normally do and lots of big injuries, the kings of this competition are still alive in Europe and just 3 points off the top of LaLiga. The main reason for that is Karim Benzema. The French striker has scored 18 league goals this season and 5 in the Champions League, stepping up to get Real out of some tough situations while big players such as Eden Hazard have been sidelined. Madrid are currently enjoying an 11-match unbeaten run, winning their last 4.

Team news: The big news that might just swing this tie is that captain Sergio Ramos is out with a calf problem and expected to miss both legs. Eden Hazard has returned to training but Real Madrid are understandably treating him very cautiously after numerous long-term injuries since arriving from Chelsea.

Liverpool: Liverpool's terrible run of form between the new year and mid-March has cost them any hope of winning the title and dragged them into a very competitive battle for a top four spot in the Premier League, but we've seen some improvement recently with 3 straight wins and fans of the Reds will be hopeful they can get back towards their peak to contend for this Champions League trophy. Diogo Jota's return from injury has been a big boost and he scored twice in a 0-3 victory over Arsenal on Saturday. Liverpool remain very short defensively and this will obviously be a huge test for whichever backup centre backs are selected but it feels as if Jurgen Klopp's team do at least have some growing optimism going into this game and will certainly back themselves for an away goal or two.

Opinion: Both teams are without some key players and have been for most of the season so this is a tough pick. I'm just not sure Liverpool will see too much danger in this Real Madrid side as long as they can prevent Benzema getting on the ball in their box whereas the hosts have plenty to fear based on Liverpool's performance at Arsenal where their attacking players have started to look sharp again. Without Ramos, I think Real Madrid are in trouble here. 1-2

A repeat of last year's final which was of course won by Bayern Munich. A serious contender for this year's title will fall in this tie but given last year's result and Bayern's superior pedigree in this competition, most consider the German club favourites. The recent news that Robert Lewandowski is likely to miss both legs has balanced the scales somewhat though.. Can Bayern progress without him?

Bayern: A 0-1 away win at second-place Leipzig on Saturday to extend their lead at the top of the Bundesliga suggests the answer to whether or not Bayern can win this tie without Lewandowski is yes. The Polish goal machine is of course vital to Bayern but this is still a team that just isn't used to losing matches and they'll remain very difficult to beat - Bayern haven't lost a European match for over two years.

Team news: As well as Lewandowski, Bayern will be without Douglas Costa, Corentin Tolisso and Javi Martinez.

PSG: We saw exactly what PSG are capable of in the first leg of their Last 16 tie against Barcelona but the struggles they've faced in Ligue 1 are unusual. Normally, PSG would already have the Ligue 1 title wrapped up by now with the UCL then their sole focus but a 0-1 defeat to Lille on Saturday (their EIGHTH league defeat of the season) means they're 3 points behind Lille on the table. It's probably a stretch to say Paris are 'out of form' after that defeat and we know both Mbappe and Neymar love to thrive on Champions League nights like this - it's no secret that the Champions League remains a major priority this season ahead of the Ligue 1 title for PSG anyway.

Team news: Neymar is back after missing both legs against Barcelona but Icardi is a doubt. Verratti, who impressed in the Last 16, is out with COVID-19, as is Florenzi.

Opinion: I'm obviously less confident of a Bayern win without Lewandowski but it would be still be very impressive if PSG are taking a first leg lead back to Paris. There's pressure on Pochettino, especially after that Lille defeat, and I think we might see quite a cagey game. I'm tempted to go 1-0 but just feel that Paris can score which would make this a good result for them. 1-1

The first thing to say is that both legs of this tie will be played in Seville at a neutral venue. Despite that, as in the Last 16 for such ties, away goals still count and this is Porto's 'home leg'. On paper, this looks the most one-sided quarter-final tie but then again, not many picked Porto to eliminate Juventus. A shocking defeat for Chelsea on Saturday, the first under Thomas Tuchel, has added further intrigue to this first leg.

Porto: Since that incredible night in Turin to progress to this stage, Porto have won 3/3 domestically. Despite being used to winning in Portugal though, Porto always embrace their 'underdogs' tag in this competition and perhaps their greatest strength is their aggressive, never-say-die attitude regardless of the opponent they're up against. Veteran Pepe starred in the Juventus tie at the heart of an organised backline and they'll make themselves hard to beat in this first leg while knowing that the pace and power of Marega up front could hurt Chelsea who looked very vulnerable defensively on Saturday.

Team news: Unfortunately for Porto, two important players are sidelined due to suspension for this first leg. Striker Mehdi Taremi is out and perhaps even more importantly, central midfielder Sergio Oliveira (who has been a great odds-based fantasy pick all season!) is also suspended. Oliveira is the club's top scorer so far this season and is the usual penalty/set piece taker - he was the man that scored the all-important free-kick against Juve in Turin.

Chelsea: After such a strong start under Tuchel, this will be the first game where we see how Chelsea respond to a defeat since the new manager arrived which makes this prediction more tricky. Clearly, it would be silly to claim this is the start of a major decline for Chelsea after just one result but the panicky manner of the defeat following Thiago Silva's red card will have concerned Tuchel - not many teams concede 5 against West Brom! We can expect the Blues to stick with their regular 3-4-2-1 approach and while they'll expect to have a lot of the ball, their organised pressing whenever Porto's defence do get the ball means the 'hosts' will need to be careful and smart in possession. Timo Werner's continued struggles mean Chelsea lack a clear goal threat but Hakim Ziyech, Christian Pulisic, Olivier Giroud, Tammy Abraham and particularly Mason Mount have all contributed under Tuchel.

Team news: N'Golo Kante is a doubt with a hamstring problem while Christian Pulisic was withdrawn at half-time against West Brom with a similar issue.

Opinion: Despite the horror show on Saturday, Chelsea should still have too much. It's hard to know how the lack of home advantage for both teams will affect things - Porto are far more used to the high temperatures but I don't think you can look at that too much when Chelsea beat Sevilla 0-4 away from home in the group stage! The pressure is all on Chelsea but I think they should handle it. 0-1
Enjoyed this? Share it!

Popie
8 caps
My wish is my team Madrid to win tonight's game.
Report