Both provided a reminder of how even at a level of football that is as high as this, star individuals can just make all the difference. I thought PSG and Dortmund would both struggle in their away legs last week and yet those two players were the difference and led their teams not only to wins but fairly dominant victories.

I'm now very excited to see what gets served up this week! Just like last time, here's your preview of each upcoming game. 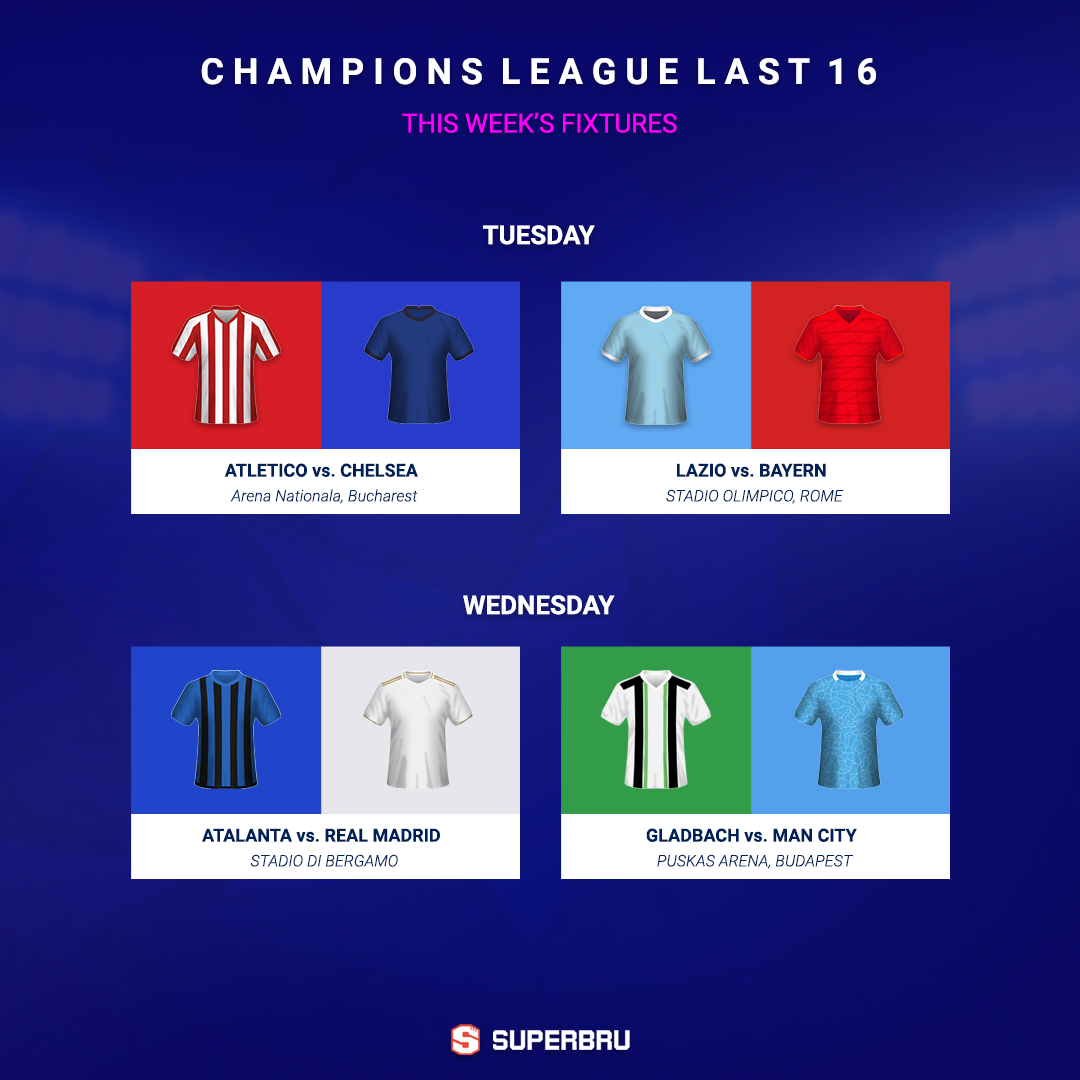 We start with what looks a pretty even tie on paper. At the time of the draw, Atletico were considered pretty strong favourites and they probably remain the more likely winners but it feels as if the odds have narrowed, particularly with this first leg being played at a neutral venue in Bucharest.

Atleti: Diego Simeone's side have been the best team in Spain by quite a distance so far this season. The typical defensive stability we associate with Atletico remains fairly strong while Luis Suarez, who arrived from Barcelona last summer, leads the way with goals at the other end. Atleti have lost just 2 league games so far this season but interestingly, one of those defeats came on Saturday and they've actually now failed to win 3 of their last 4 games. A minor blip in what will prove to be a very successful season? Or are we about to see Atletico slip up in Europe and the LaLiga title race?

Team news: Kieran Trippier is suspended. Yannick Carrasco, Jose Gimenez and Hector Herrera are all injured. All 4 players have been important for Atleti this season.

Chelsea: Since the arrival of Thomas Tuchel at Stamford Bridge, Chelsea are unbeaten in 7 games, drawing 2. We've seen the Blues dominate possession and concede very few goals under their new manager but this is the first of a very tough run of games for Tuchel's team and the period where most believe we'll find out if there's been any real progress since he took over from Frank Lampard. Chelsea won all 3 of their away games in the group stage of this competition.

Team news: Kai Havertz and Christian Pulisic are both 'fine' and could return but Thiago Silva remains out.

Opinion: A very tough pick! I still see Atletico as the more likely winners, particularly with Thiago Silva injured, but Chelsea certainly have a chance and will perhaps be encouraged by the neutral venue. I think we might see a draw which if it includes a goal for Chelsea, would be a very favourable result for Thomas Tuchel ahead of the second leg at Stamford Bridge. 1-1

An interesting matchup between two sides that were unbeaten in the group stage of this tournament. Holders Bayern remain fairly strong favourites, but with the German giants stuttering a little in the Bundesliga and missing a couple of key players, Lazio might fancy their chances in this first leg.

Lazio: Currently 5th in Serie A, Lazio remain in a competitive battle for a top four place but are in decent form having won 8 of their last 10 games in all competitions. This is only Lazio's second ever appearance in the knockout stages of the Champions League with the first coming way back in 2000. Ciro Immobile usually scores the goals for Simone Inzaghi's team and he'll likely need to score a couple in this tie since Lazio failed to keep a single clean sheet in the group stage.

Team news: Stefan Radu and Thomas Strakosha are both out.

Bayern: After winning yet another trophy a couple of weeks ago with Club World Cup glory in Qatar, Hansi Flick has kept up his incredible run in charge of Bayern that has seen him win every title in sight. You'd be brave to go against Bayern retaining their Champions League trophy this season, but this will be an early test for them in the knockout stages due to some players missing with injuries/coronavirus and some unconvincing results since they've returned to Germany from the Club World Cup. 2 of the 7 league games Bayern have failed to win so far this season have come in the past week.

Opinion: The starting XI Bayern put out will be far from their strongest but it's still very hard to go against them given their run of results in this competition. I expect them to return to Munich with a lead in this tie. 1-2

The dark horses of last season's Champions League against the Kings of this competition. This is the first ever meeting between these teams and while Atalanta can't come close to matching the pedigree of the 13-time Champions, they'll feel they have a real chance given the team news...

Atalanta: Atalanta's attacking style that results in a LOT of high-scoring games makes them a team that are great to watch but importantly, they've become quite consistent in terms of results as well which is why they're back in the knockout stages of this competition after also reaching them in their debut Champions League campaign last year. Currently 4th in Serie A, Atalanta qualified for this stage of the tournament by progressing ahead of Ajax in a difficult group that also included Liverpool. Gasperini's team have scored 11 goals in their last 4 games and are unbeaten in 5.

Team news: Wing-back Hans Hateboer is the only known absentee.

Real Madrid: After an incredible run of reaching the semi-finals or better for 8 consecutive seasons, Real Madrid have now been eliminated at this stage of the Champions League in each of the last 2 seasons so will be very eager to progress this time around. Their recent league form has been good, winning their last 4 games to put some pressure on neighbours Atletico at the top of the table, but they've been hit hard by injuries and this tie against a strong Atalanta team will be a big test for Zidane and his side. Real squeezed through a crazy Group B to reach this stage, winning only 3 of their 6 games and losing to Shakhtar twice.

Team news: Real Madrid have named their travelling squad and are without a lot of big names. The most important players that they are missing are captain Sergio Ramos and striker Karim Benzema but Eden Hazard, Rodrygo, Federico Valverde, Marcelo, Eder Militao, Odriozola and Dani Carvajal are all also missing. The squad ZIdane has had to name includes only 11 senior outfield players.

Opinion: I fancied Atalanta for a slight upset as soon as I knew Ramos was out but with all these other injuries, most notably Benzema, it really does feel like the Serie A side should win. There's pressure on, and you always feel that the likes of Kroos and Modric can win Real Madrid a game, but it won't be easy to stop Atalanta from scoring. 2-1

Gladbach are another side that is fun to watch and provided us with great entertainment during the group stage but with their Head Coach off to Dortmund in the summer and Manchester City currently the best team in the world, this looks like a tough ask!

Gladbach: A look back at Gladbach's season so far shows them to have been relatively inconsistent, but capable of a big performance against teams that are considerably better than them on paper. They edged their way through Group B with just 2 wins because they battered Shakhtar twice but City will be more wary of the fact Marco Rose's team have beaten Bayern, Dortmund and Leipzig at home this season, though this match will be played in Budapest which is a shame for Gladbach. Lars Stindl has led the way in terms of goals but Alassane Plea and Marcus Thuram are also dangerous in the attacking third. In the centre of midfield, Florian Neuhaus and Denis Zakaria are both young players with a lot of talent that have been rumoured to be attracting a lot of interest from the 'super clubs'.

Manchester City: City's form streak does the talking for me. Pep Guardiola's team have been perfect in 2021 and are currently on a 18-match 100% winning run across all competitions. Defensive solidity has been the base for that streak and they now appear to have all of their attacking players fit and available for the first time in a little while. There's pressure in this tournament as it's long been known as the one that Guardiola has been brought in to win, but this looks like a winnable tie for City, especially given their form.

Opinion: As much as I like Gladbach, it's very difficult to see City not winning a match at the moment! The neutral venue makes it even less likely that we'll see an upset. 0-3
Enjoyed this? Share it!

keithyp1986
1,117 cap
Why is everybody so in thrall to City? Yes they've been brilliant this year so far but every run ends somewhere but no one is brave enough to go against them. They're not going to win every game till the end of the year
Report

Jersey-puller
20,550 caps
Is it just me but whenever I see Hans Flick's name I think of the old 80s comedy TV show 'Allo Allo'.
Report
Edition: North America change
Find us on Facebook
@Superbru on Twitter