Jack  |  Social Media & Communities Manager
Mon 15 Feb 2021
The arrival of the Champions League Last 16 is always an exciting time for football fans! After waiting a couple of months for these knockout fixtures since the draw took place, it's fair to say that anticipation is high but also, as always, there's a lot of intrigue around many of them since the situation at a lot of clubs has changed quite dramatically since December.

As a fan of the two-leg system and away goals, I think it's great that we're back to that format this season after understandably having to switch to a 1-leg format in Portugal for the end of last season's competition but it's worth noting that things still aren't 'normal' with plenty of fixtures set to be played at neutral venues due to government travel restrictions.

There is of course a fair argument that the away goal rule makes far less sense when both teams are playing away for some of these fixtures and that's something to be aware of when making your picks - we're marking such games with 'neutral venue' on the picks pages as clearly as we can in both this tournament and the Europa League predictor.

Below, I've looked to set the scene for each match and provide you with some team news/opinion on each tie in case it's helpful with your picks! 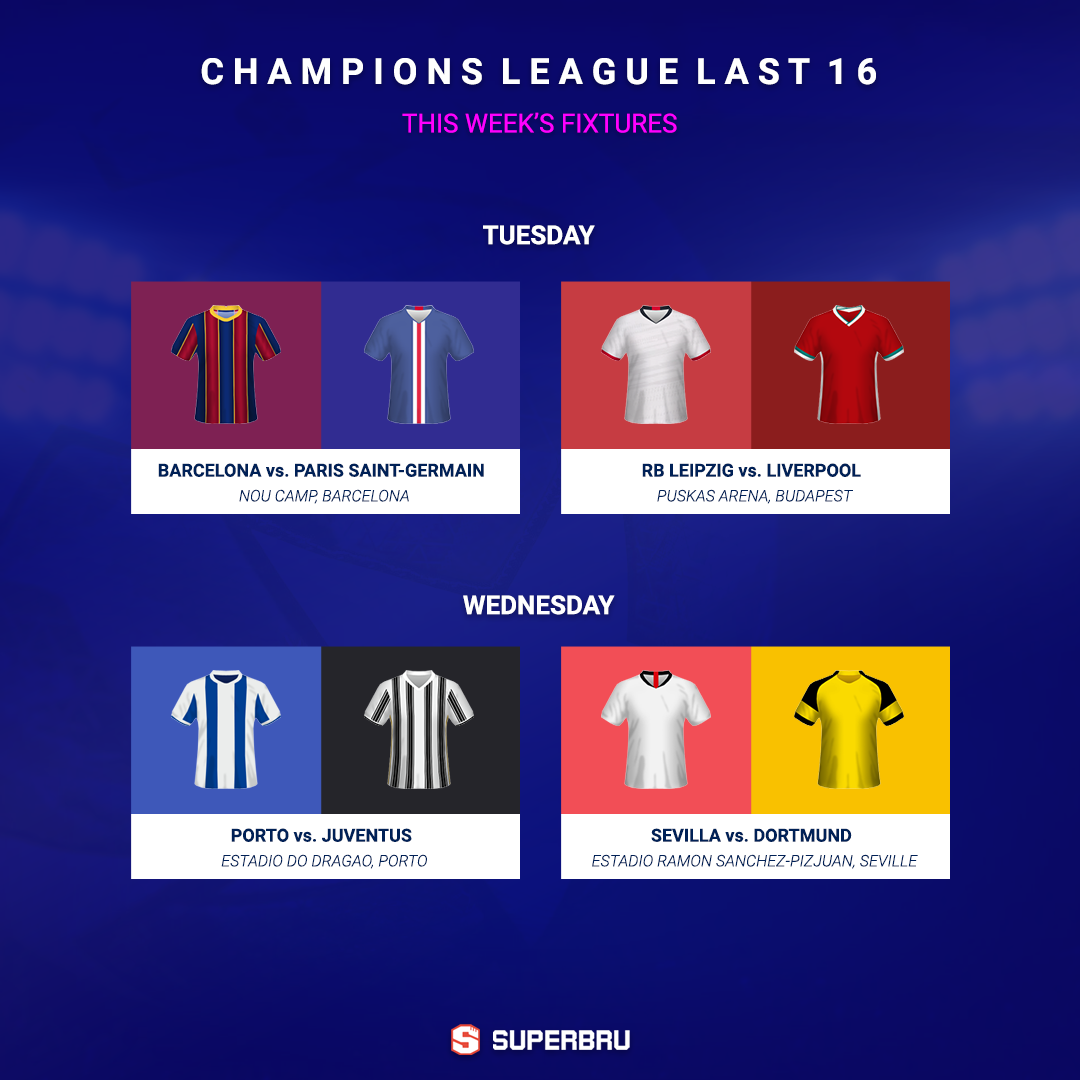 First up, we have the tie that many will see as the 'must-watch' of the round. There's just so much in the background here with Barca's 6-1 win in 2017, Neymar's transfer to PSG that followed and Barca's recent embarrassments in the knockout stages of this tournament that have coincided with PSG gradually improving to the point where they were runners-up last season.

Barcelona: We all know it often comes down to just 'on the night' in this tournament, but if form is going to play a part, then Barcelona should actually feel relatively confident coming into this game after a big improvement on their early season results. Ronald Koeman's side are unbeaten in their last 12 LaLiga games, winning their last 7. Defeats in the Super Cup and Copa Del Rey have been a reminder that this Barca team is still far from being as strong as their squads of the recent past, but with Messi in form, Griezmann finally showing his ability in a Barcelona shirt and Ousmane Dembele fit, there is reason for some cautious optimism.

Team news: Ansu Fati remains out with a long-term injury, Phillipe Coutinho is also out. Gerard Pique has been pictured in training and could return in this match.

PSG: Mauricio Pochettino has lost just 1 of his 10 games in charge of PSG so far but he'll be more than aware that this is the competition that he'll be judged on during his time in Paris. Unusually, PSG aren't actually top of Ligue 1 at the moment so the league does still remain a focus either side of these UCL legs and squad depth could well be tested because of injuries to key players.

Team news: The big news heading into this game is that both Neymar and Angel Di Maria are sidelined. Without them, there's a lot of pressure on Kylian Mbappe to deliver as the club's remaining star name, though Mauro Icardi and Moise Kean are both capable goalscorers.

Opinion: This is one of those ties where things have just changed so much since the draw! PSG have Pochettino rather than Tuchel, Neymar and Di Maria aren't fit and Barcelona have actually become quite consistent with the crucial part of that being Messi's return to form/focus. I didn't think Barca had a chance back in December and I'm still very concerned for them in the away leg but, given context, I actually think they're favourites to win this at the Nou Camp. 2-1

The first game we'll see at a neutral venue. Leipzig are playing at 'home' in Budapest with the return leg still currently scheduled for Anfield. Liverpool's domestic form has been terrible in recent weeks with Jurgen Klopp conceding that his team's title charge is over after a defeat at Leicester. Will the Champions League prove a welcome distraction where they can return to form? Or will this Leipzig side add to their misery?

RB Leipzig: The 'hosts' are going fairly well at the moment. Currently second in the Bundesliga, Leipzig have lost just 2 of the 17 games they have had since a 1-0 UCL defeat at PSG. Of course, one of those 17 games saw them defeat Manchester United 3-2 to eliminate Liverpool's rivals from this tournament. Rather than one standout prolific player, goals have been spread around the squad since Timo Werner's departure to Chelsea.

Team news: Since arriving from Salzburg in January, Dominik Szoboszlai is still yet to play for Leipzig due to injury and won't be ready for this game either. Emil Forsberg is another player Leipzig will be disappointed to be without.

Liverpool: 5 losses in 7 games means Liverpool are in very poor form and they remain short of centre backs. Diogo Jota's injury means Jurgen Klopp is also going to struggle to 'mix it up' in attack as he attempts to turn things around but his team performed well on the road in the group stage of this tournament, winning at Ajax and Atalanta.

Team news: Jota, Gomez, Matip, Van Dijk and Keita are all out. Fabinho is a doubt. Thiago, who obviously has great Bundesliga experience, should be available.

Opinion: It still feels difficult to go against Liverpool because of what this team has achieved but there really aren't many encouraging signs at the moment. I think there'll be goals at both ends though and if Liverpool's attack can make up for their defensive concerns then the away goals will make this a favourable result. 2-2

Juventus are fairly clear favourites to progress to the next round (and win this match) but Porto really impressed in the group stage. Juve are hoping to return to their 'norm' of progressing beyond this stage after an upset last season where they were beaten on aggregate by Lyon.

Porto: Porto's defence was the especially impressive element of their group stage performance. After a 3-1 defeat against Manchester City in their opener, they didn't concede another goal in their remaining 5 games. Domestically, Porto are used to avoiding defeat but a run of 3 consecutive draws means they're far behind Sporting in the title race.

Juventus: A 1-0 defeat at Napoli on Saturday ended a 7-game unbeaten run for Juve but Andrea Pirlo's team have been going OK and had even shown signs of the defensive consistency we were used to under Allegri a few seasons ago. Allegri was manager when Juventus last faced Porto back in 2017 as the Italian side won the Last 16 tie 3-0 on aggregate. A 0-3 away win at Barcelona saw Juve top their group in this year's competition.

Team news: Cuadrado and Arthur are both expected to miss this match. Dybala could return but hasn't played since January 10th.

Opinion: I don't think it'll be easy/too eventful, but Juventus should get the win. I think both sides will look to remain solid but with Ronaldo in the team, there's always a good chance of a Juventus goal. 0-1

On paper, this looks like one of the toughest games to call in the round. Sevilla have found incredible consistency since December, while Dortmund are inconsistent but devastating on their day...

Sevilla: Since a 0-1 loss against Real Madrid the same week they lost 0-4 against Chelsea in this competition, Sevilla have lost just 1 of their last 19 games in all competitions, winning their last 9. Perhaps even more impressively, Sevilla haven't conceded a single goal in their last 7 games. Add in the fact they've recently acquired Papu Gomez from Atalanta and this Sevilla side look set to continue to grow. They're very good at winning the Europa League, but now that they've made the UCL knockouts, this appears a good chance for them to progress to the quarter-finals.

Team news: Acuna, Navas and Ocampos are all doubts.

Borussia Dortmund: It won't be the first time you've heard this - the current situation with Dortmund is that they remain a threat going forward but are struggling defensively. BVB have conceded at least twice in 5 of their last 6 games. Interestingly, on the eve of this game, Borussia Monchengladbach have announced that Marco Rose (their head coach) will be leaving to join Dortmund in the summer. Edin Terzic is currently in temporary charge. Main man Erling Haaland scored at the weekend and is the key to Dortmund's hope of winning this tie - it'll be fascinating to see how he fares against Sevilla's strong defensive partnership of Diego Carlos and Jules Kounde.

Team news: Burki, Hazard and Zagadou are all expected to miss out. Meunier could return.

Opinion: It's hard to see Sevilla conceding at the moment let alone lose! There's every chance Haaland proves me wrong because he's a machine but I think Sevilla are favourites, particularly at home. 2-1
Enjoyed this? Share it!

YOUNG ERIKINA
134 caps
I love this new update of including club news and recent performance. Nice one
Report

ADMIN
Jack
24,656 caps
Thanks, Paul. Haha, would have thought there'd be more chance of me going well in this tournament but looks like I have some catching up to do in the predictor! Doing OK in the Odds-based fantasy so far though.. 16 Feb 16:26
Report

Azmi
4,539 caps
I didn't realize Leipzig are playing on a neutral venue outside Germany. So I went from draw to Liverpool win.
Report

Tinsel38
755 caps
Loving the new updates and looking forward to getting my teeth back into European football again.
Report

algreek
3,554 caps
I made almost the same picks before reading this. But everything went the opposite way...
Report
Edition: North America change
Find us on Facebook
@Superbru on Twitter