Hutch  |  Commercial Director
Thu 19 Jan 2023
My 10 out of 12 last weekend was slightly better than the community average, but only one match was picked by less than 50% of the community, so it feels like a missed GSP opportunity.

This weekend sees the last of the group stage games before the knockout tournament begins.

Here are my Heineken Champions Cup Predictions for Round 4. 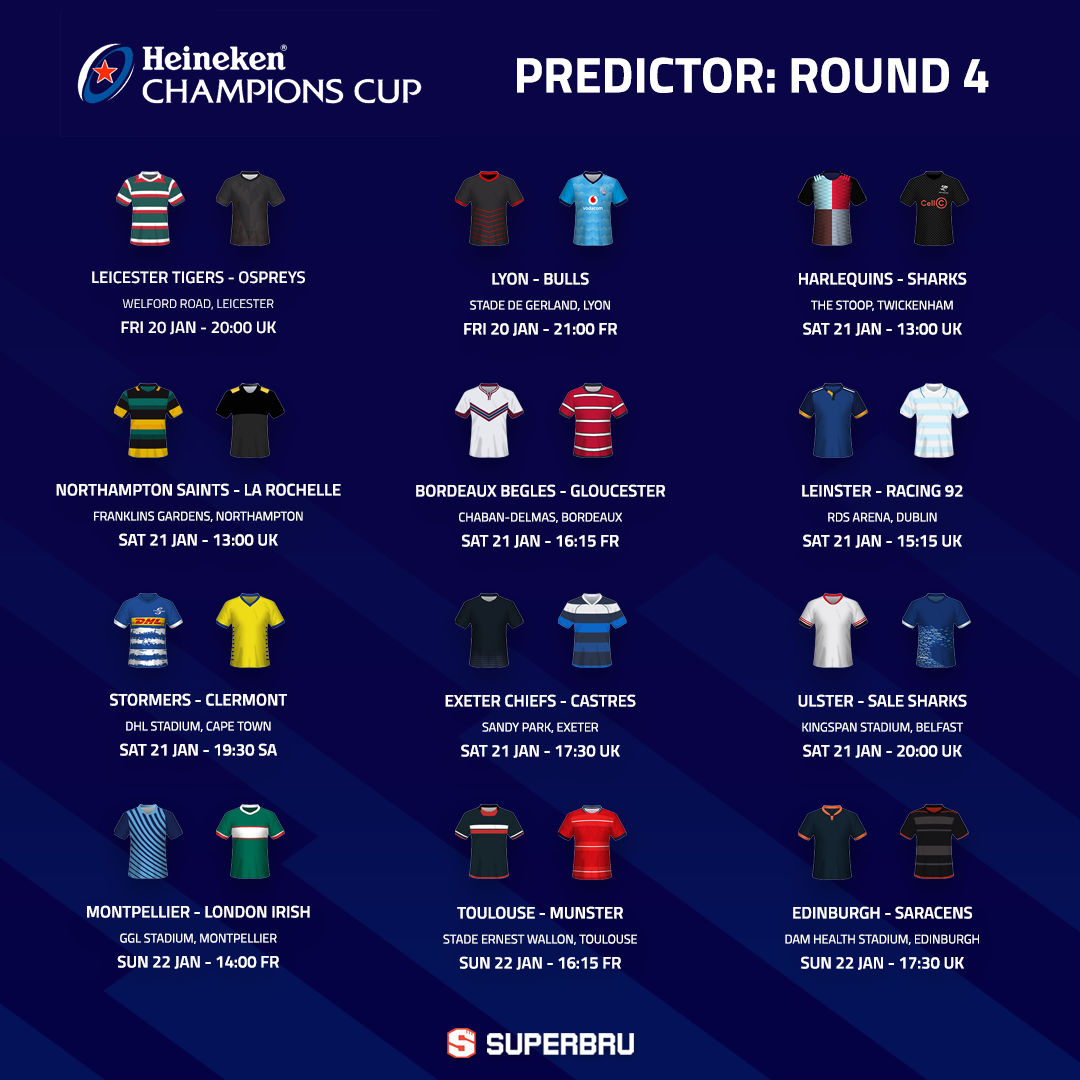 It was a stunning win in France for the Tigers last weekend, and they should follow that up with a comfortable win at home to the Ospreys. Leicester by 18

Nearly everyone will pick the Bulls here, but I’m going for the French side at home. Lyon by 4

The General is very excited to have the Sharks in London, but I suspect they’ll go home in defeat from the Stoop. Harlequins by 6

Normally I’d be wary of picking a French team away from home, but the Saints are down and out and if La Rochelle can win at Ulster, they can win at Franklins Gardens too. La Rochelle by 7

Gloucester won the reverse fixture in December, but with home advantage, Bordeaux are the likely winners here. Bordeaux by 8

The Irish side are looking unstoppable this season, and this should be another home win at the RDS. Leinster by 13

Clermont beat the Stormers at their home ground, but Cape Town is a long way from home and this should be a victory for the Stormers. Stormers by 13

This one is only going one way, with Castres having given up in this tournament. Exeter by 23

Sale thrashed Ulster in the opening round, but neither has managed a win since then, and with home advantage, I’m backing Ulster to take this one. Ulster by 4

This will be a win for the French side, with London Irish already out of the tournament. Montpellier by 23

This should be the highlight of the weekend, with Munster out for revenge after losing the reverse fixture at Thomond Park. I suspect the French team will be too strong given Munster’s form this season, but don’t rule out a famous upset here. Toulouse by 8

Saracens are clearly intent on returning to the top of the European game, and whilst this will be a tough fixture and something a preview of England v Scotland in the Six Nations, I’m backing the English side. Saracens by 4

Larry
5,051 caps
I agree with most except the Sharks game. Sharks by 12
Report

Larry
5,051 caps
@Ant that win margin for the Sharks would be awesome. It's not impossible.
Report

dugardy
13,775 caps
I missed the GSP by one game last week and the week before, both by not picking the Bulls, I wont make that mistake again for the third time. I also think you are going to fail with the Sharks choice as well.
Report

Larry
5,051 caps
@dugardy, do you mean that the Sharks will win?
Report

Larry
5,051 caps
@TheVikingKing, my consistency of picking against the Bulls finally paid off. The Bulls got hammered good and solid last night lol
Report

TheVikingKing
3,959 caps
Larry 1 out of 125 games is not bad at all. Hahahaha. Cannot see the Sharks winning against Quans. It pains me to say, but think only the Stormers will fly the flag for SA this weekend.... what a horrible start to the weekend... snow did not help the Bulls cause what so ever. First time many of those boys saw snow, never mind playing in it.
Report

Larry
5,051 caps
Sharks and Stormers will win. The snow had nothing to do with it. They just played badly. They couldn't get any of the basics right. At least they are still in the last 16 but next week will be even tougher and will most likely be kicked out because they will be playing against even tougher opponents (either Toulouse or La Rochelle) but will see what happens come 5om after the Sharks game if the Sharks host a playoff game or not. I like this banter haha
Report

Larry
5,051 caps
Was just a bad day for the Sharks. Sharks still in the final 16 and a possibility of a home play off. Will have to wait and see what happens with the Saracens game. For the Sharks still to have a home play off, Saracens need to lose against Edinburgh and not grab a losing bonus point and Edinburgh need to win by less than 10 and onky get 4 points.
Report

TheVikingKing
3,959 caps
Was it the snow that did it to the Sharks as well Larry? Or could it not have been the snow????
Report

Larry
5,051 caps
It was not the snow. Just a bad day at the office for 2 of the 3 SA teams. But at least we got a BP for 4 tries lol
Report
Edition: North America change
Superbru on Facebook
Superbru on Twitter
Superbru on Instagram