Hutch  |  Commercial Director
Thu 12 Jan 2023
The Heineken Champions Cup returns for Round 3, which is always crucial as teams jostle for position before the knockout stages.

Here are my Heineken Champions Cup Predictions for Round 3. 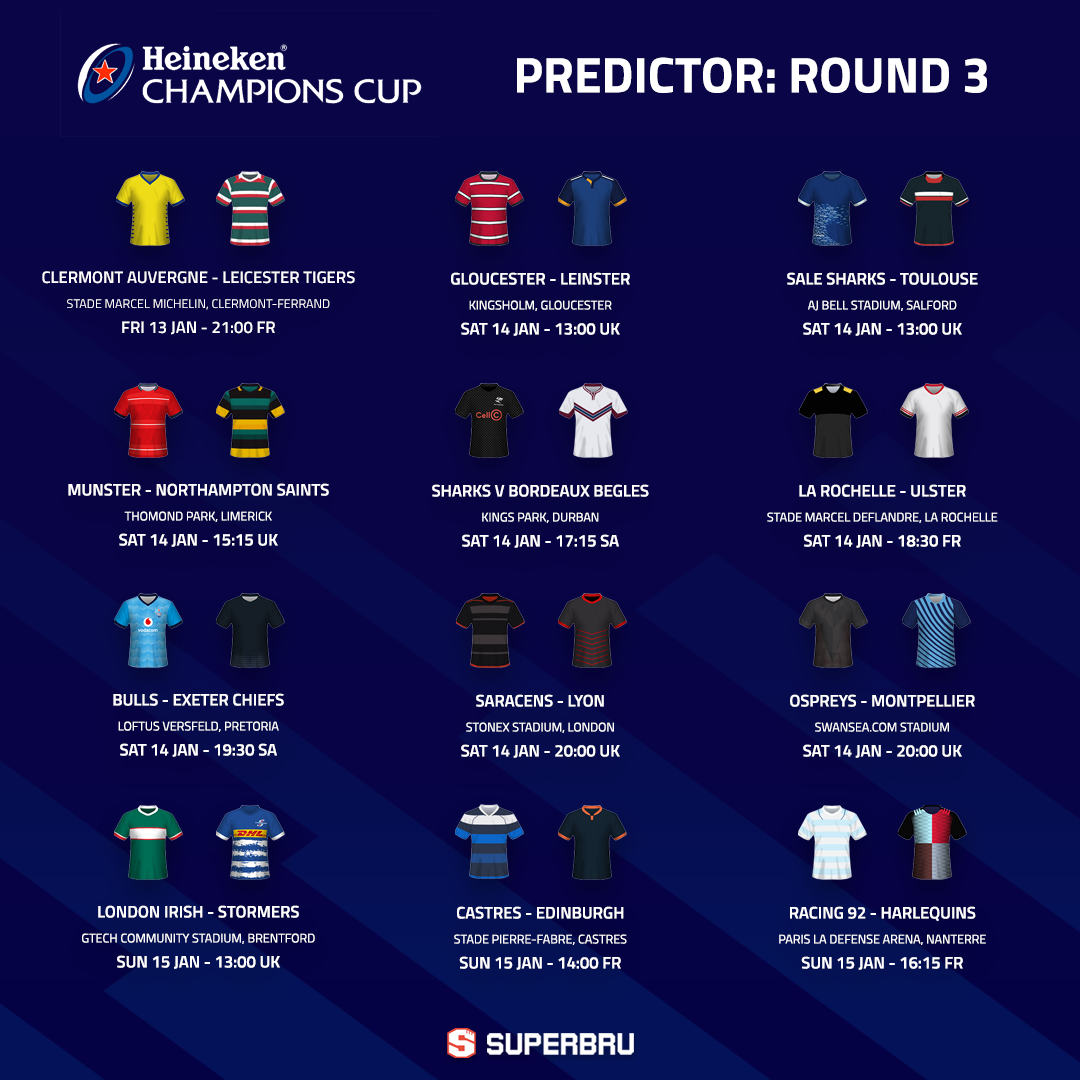 The Tigers won in Clermont last season, but they’ve just lost their Head Coach to England, and I suspect this will be a home win. Clermont by 9

You can’t pick against the Dublin side at the moment, and I can’t see Gloucester turning around their 57-0 defeat in the away game before Christmas. Leinster by 13

This is quite a tough one and a home win isn’t out of the question, but it’s probably sensible to back Toulouse. Toulouse by 7

This should be a fairly comfortable home win for the Sharks against a French side that will have given up after their two defeats so far. Sharks by 23

The Saints might have given up too, and it’s highly unlikely they’ll get anything from this game at Thomond Park. Munster by 19

The French side won at Ravenhill last month, and so you have to back them to win again at their home ground. La Rochelle by 9

This is a great-looking fixture, with the Chiefs making their first trip to South Africa having beaten the Bulls comfortably at their home ground last month. When the Bulls play at home, they are normally worth backing. Bulls by 6

The Welsh side caused a shock by winning away in France - can they back it up with another win at home? Ospreys by 2

This is likely to be a one-sided affair with Saracens up against a disinterested travelling French team. Saracens by 28

The French side have lost both of their games so far, including to Edinburgh away from home last month. I’m still leaning towards a home win here, however. Castres by 4

The travelling South Africans ought to win this against one of the bottom-half English sides. Stormers by 9

Quins won the reverse fixture, but this is a tough trip to Paris and their away form rarely matches their strength at the Stoop. Racing by 11

Larry
5,051 caps
There's always a chance of an upset in Pretoria. Maybe more so now that their head coach is out of action for a while. Always a risk picking an upset but can move you up the pool logs. I'm not a Bulls fan and most times will back the opposing team and this could be one of those un expected upsets. Exeter by 8
Report

TheVikingKing
3,959 caps
Get ready Gens, Your in for a rugby Master-Class. When will you learn not to bet against the Mighty Bulls at Loftus.

Larry
5,051 caps
I will always support the opposing team against the Bulls. They lost 3 in a row INCLUDING against the Sharks!!!! Haha. So I. Mudt be doing something right. The "mighty" Bulls aren't as mighty as you might think.
Report

TheVikingKing
3,959 caps
Did the Bulls not also beat the Sharks at loftus in the URC???? So that makes it 1 - 1. Nothing to get to excited about mate....
Report

TheVikingKing
3,959 caps
Truly happy you take it in the spirit it is meant Larry. I to enjoy our verbal jousting back and forth. ;-) 15 Jan 07:55
Report