Hutch  |  Commercial Director
Thu 15 Dec 2022
A mixed start for me in Round 1, picking a couple of upsets but missing most of the 50/50 calls frustratingly. I’m looking to catch up this week...

Here are my Heineken Champions Cup Predictions for Round 2. 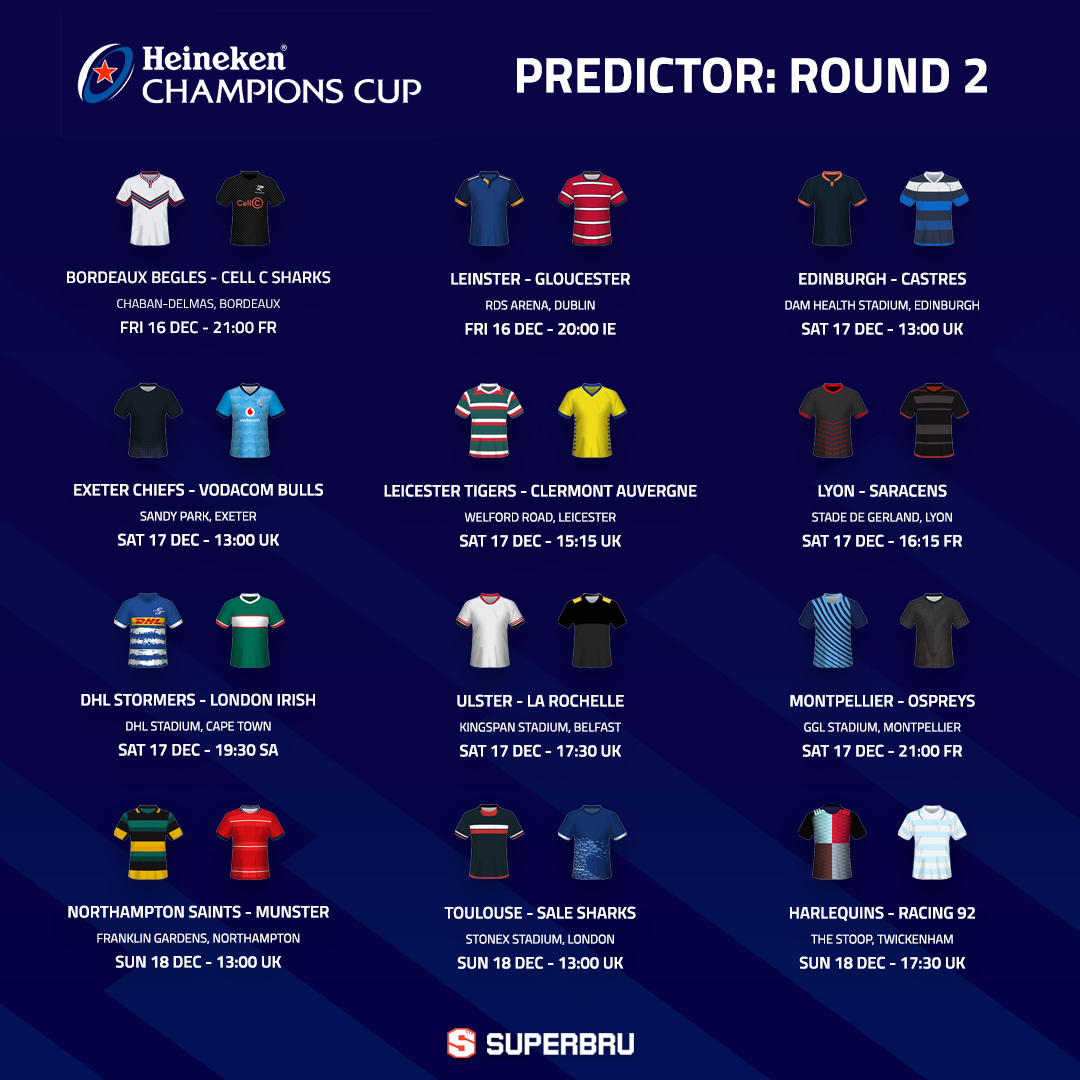 This French team will be tough to beat at home, and most people will pick the Sharks. Bordeaux by 4

Leinster’s thrashing of Racing last week was quite a statement, and this should be another big win. Leinster by 28

Edinburgh were half-decent against Saracens, and they should win this one comfortably. Edinburgh by 16

The Chiefs had a good win in France last week, and the Bulls are likely to find that wins don’t come easy at Sandy Park. Exeter by 9

Home advantage should swing things in the Tigers’ favour for this one, given the French hatred of playing away. Leicester by 8

This is a tough one, but given that Lyon have just returned from a trip to South Africa, I’m leaning towards Saracens. Saracens by 4

This should be an easy win for the Stormers against one of England’s mid-table teams. Stormers by 23

Ulster were nilled by Sale Sharks last week, which suggests they aren’t too focused on this competition and I’m backing the French side who thrashed Northampton. La Rochelle by 7

This should be an easy home win for the French team. Montpellier by 19

Munster were beaten at Thomond Park last week, and have not been in great form. Northampton by 4

Both teams had big wins last week, but the French side are looking like tournament favourites along with Leinster. Toulouse by 13

I’m giving this to the home side, given that Racing were thrashed at home and really won’t fancy this away trip. Harlequins by 6

dugardy
13,775 caps
I missed the Slam last week with that Exeter vitory, agree with most of your pics except for Ulster, Munster and Racing for wins this weekend
Report

Larry
5,051 caps
Sharks to carry on with their winning momentum. Sharks by more than 7 ; Exeter by more than 10 ; Stormers by less than 15 (London Irish could upset the Stormers and if they do it will be by more than 7),
Report

Fish
54,219 caps
Only game I got wrong this weekend was the Montpellier game.
Report