Superbru Team Fri 20 Jan 2023
With the 2023 Six Nations championship now just a couple of weeks away, all six squads for the tournament have been named.

It's set to be a fascinating tournament in a World Cup year, not least due to some head coach changes as Steve Borthwick will be taking charge of his first games with England and Warren Gatland begins his second stint with Wales.

Those two nations, along with Scotland and Italy, go into the tournament as slight underdogs as Ireland and France are widely expected to be the teams in with the best chance of winning the trophy.

France are defending champions following a first Grand Slam in 12 years in 2022, while Ireland are the number 1 ranked team in the world after an away series win in New Zealand last year.

Here are the squads each head coach has picked for the opening matches of this year's tournament. On Superbru, you can join our Six Nations Predictor and Six Nations Fantasy games now.

Steve Borthwick has named Owen Farrell as the captain of his first England squad, with Courtney Lawes and Ellis Genge vice-captains. The uncapped members of the squad are George McGuigan, Jack Walker, Ollie Hassell-Collins, Cadan Murley and Fin Smith. 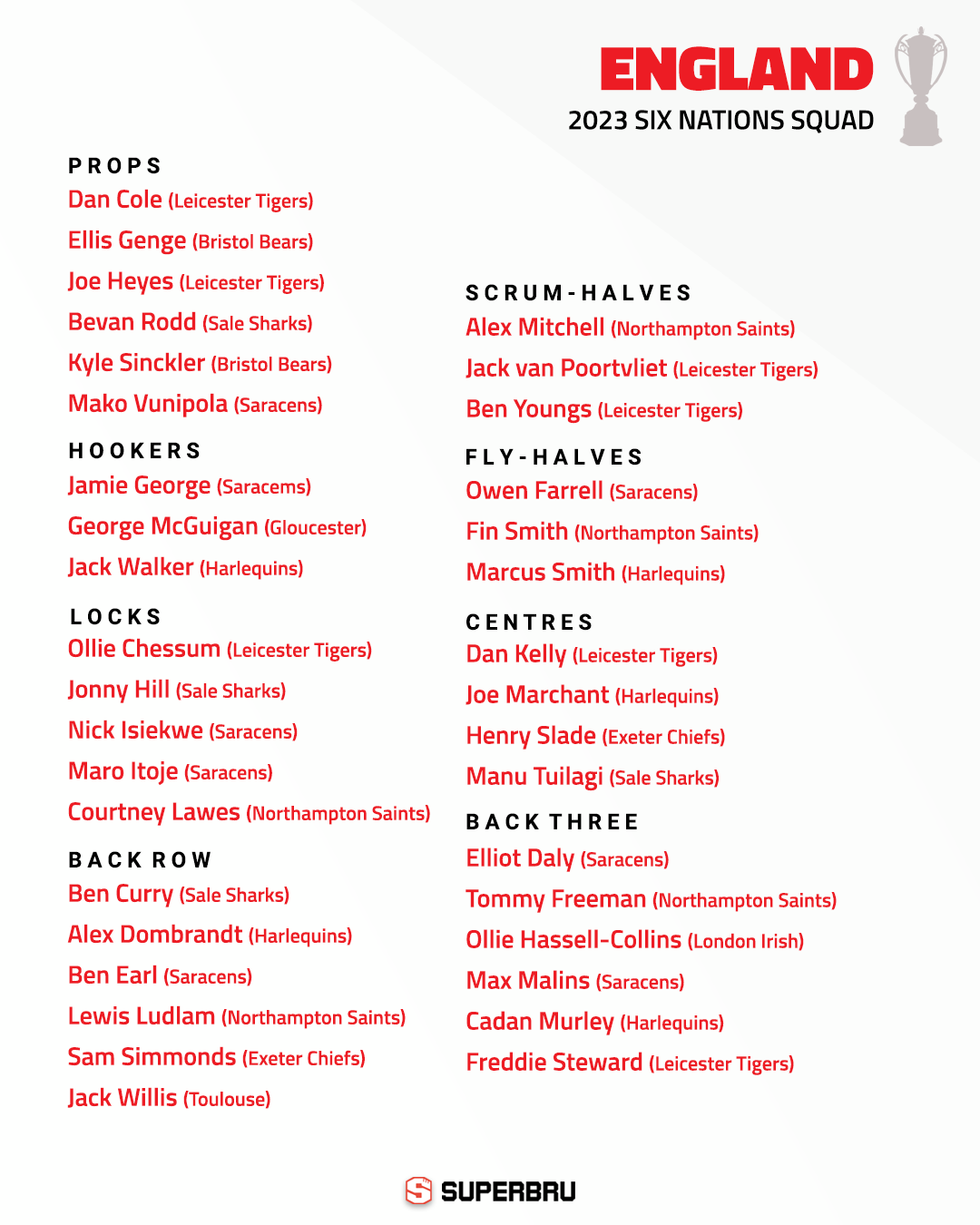 Despite a number of injuries including Cameron Woki, Peato Mauvaka and Jonathan Danty, Fabien Galthie has named a large squad for this tournament that appears very capable of defending the title. Antoine Dupont captains the side while two 19-year olds are among the uncapped squad members - Emilien Gailleton and Louis Bielle-Biarrey. 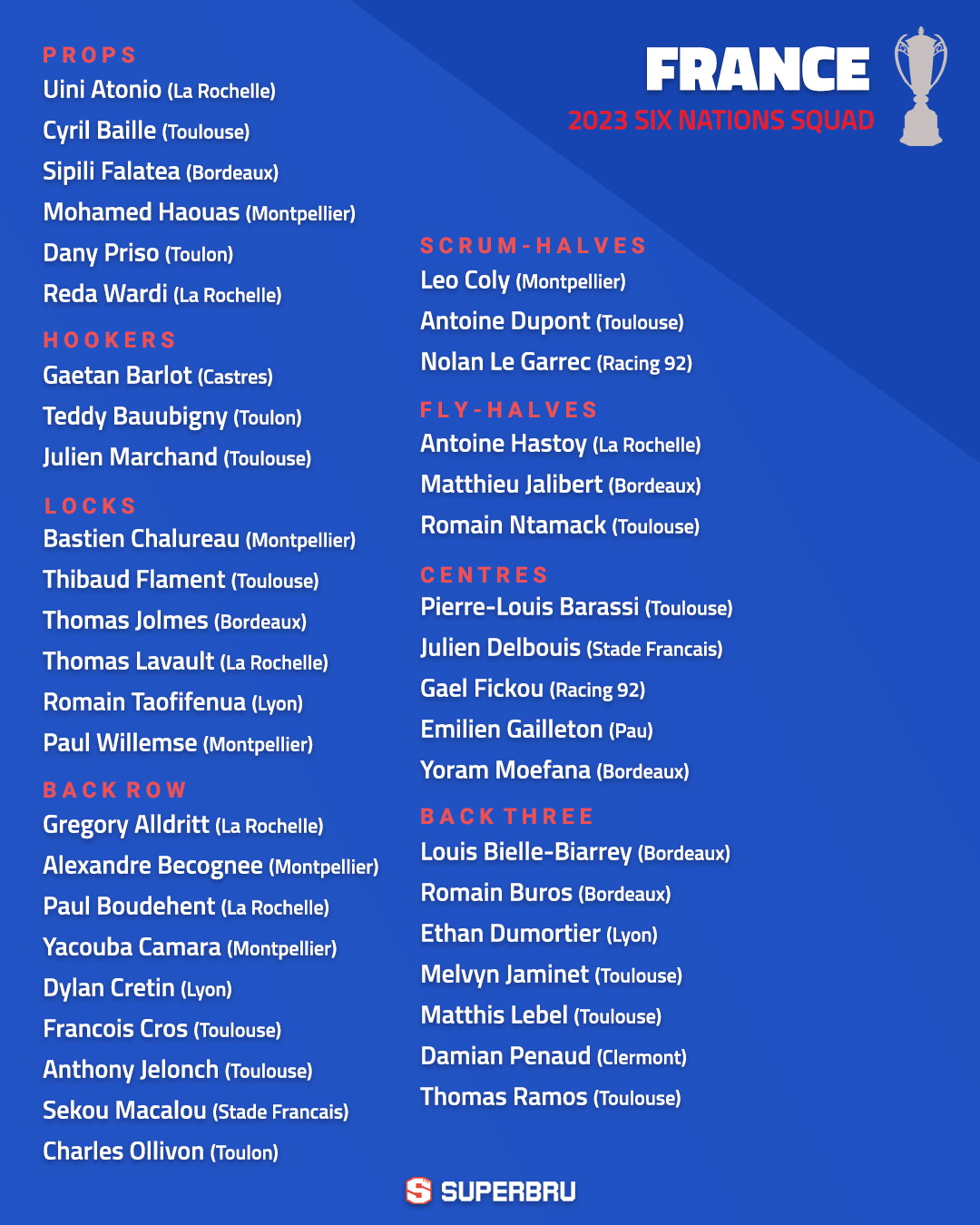 Leinster's Jamie Osborne is the only uncapped member in a settled Ireland squad. Andy Farrell's team have the benefit of home advantage for their match against France but they'll need to start this tournament well with that fixture coming in Round 2 after a difficult trip to face Gatland's Wales first up.

After wins over Wales and Australia in 2022, Italy will be hopeful of another victory or two in this campaign and Ange Capuozzo is a standout name in the squad after his displays last year. Michele Lamaro captains the Azzurri but Paolo Garbisi (injured) and Monty Ioane (unavailable) may well be missed. 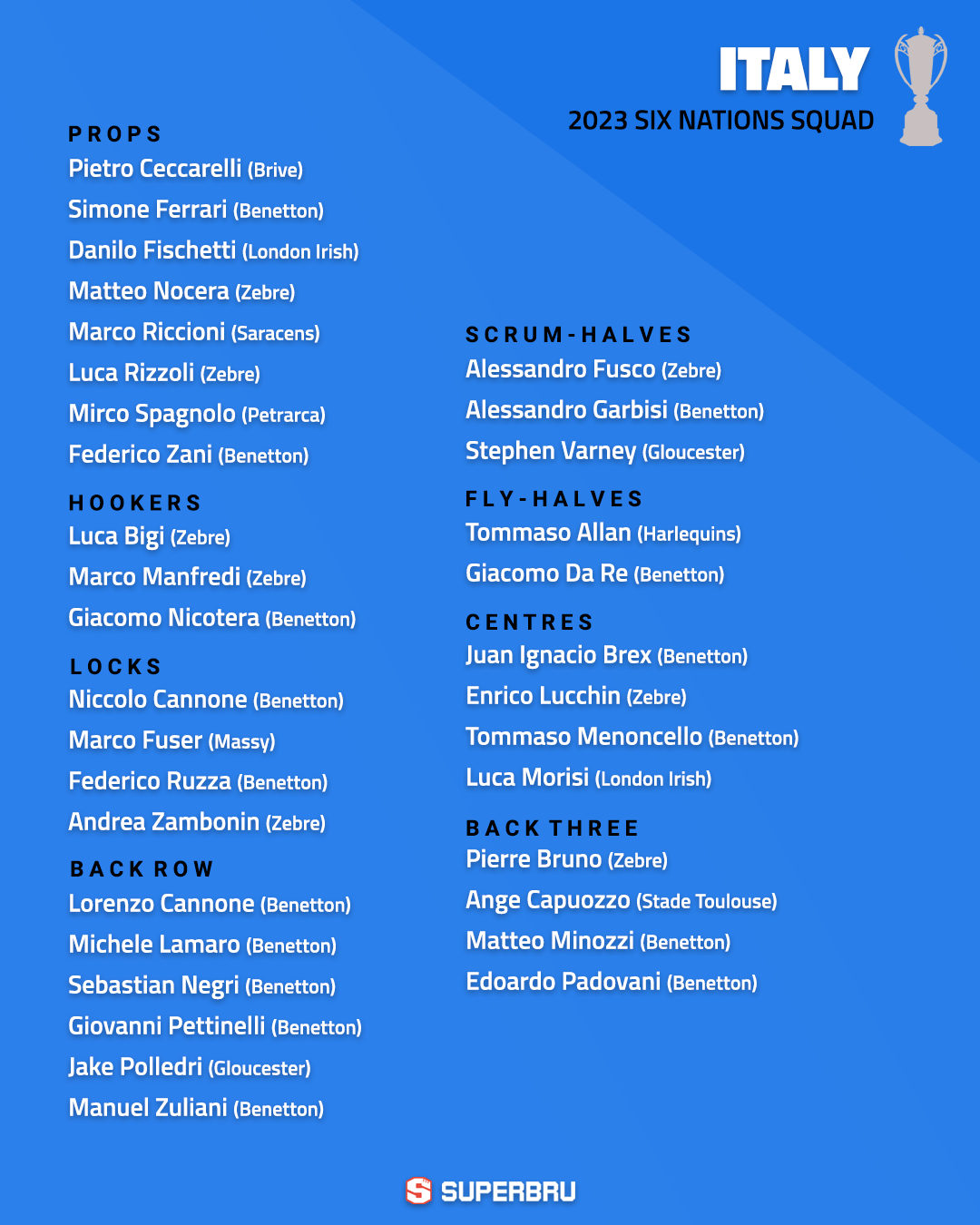 There are four uncapped players in Gregor Townsend's Scotland squad - Ruaridh McConnochie, Stafford McDowall, Cameron Henderson and Ben Healy who has recently agreed a move to Edinburgh from Munster. Jamie Ritchie will captain the side. 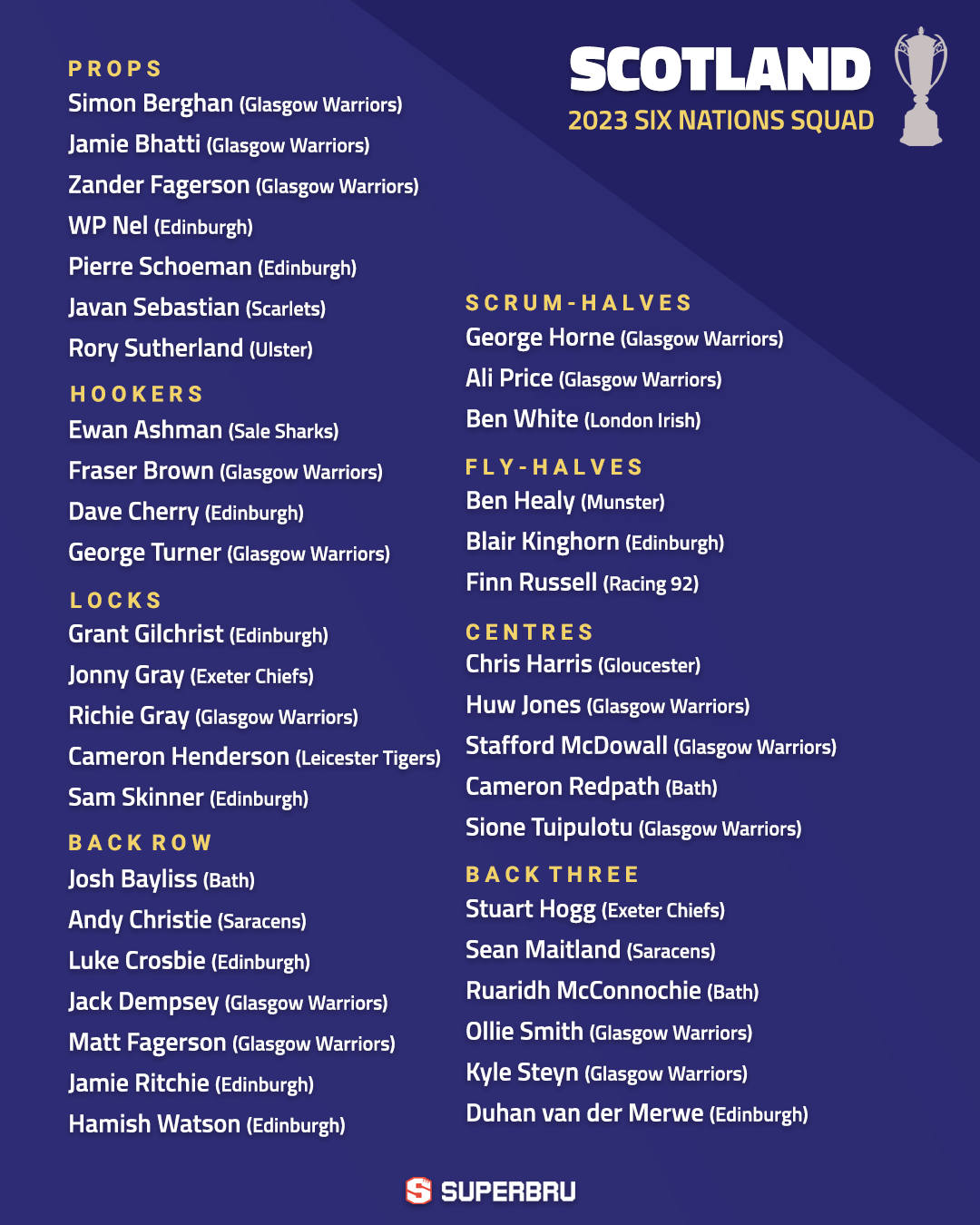 Warren Gatland has named a 37-man squad for the Six Nations as he returns to Wales with Ken Owens selected as captain and Rhys Davies, Keiran Williams, Mason Grady and Teddy Williams the uncapped players included. Rio Dyer, Joe Hawkins and Dafydd Jenkins are set for Six Nations debuts after impressing in the 2022 November Internationals. 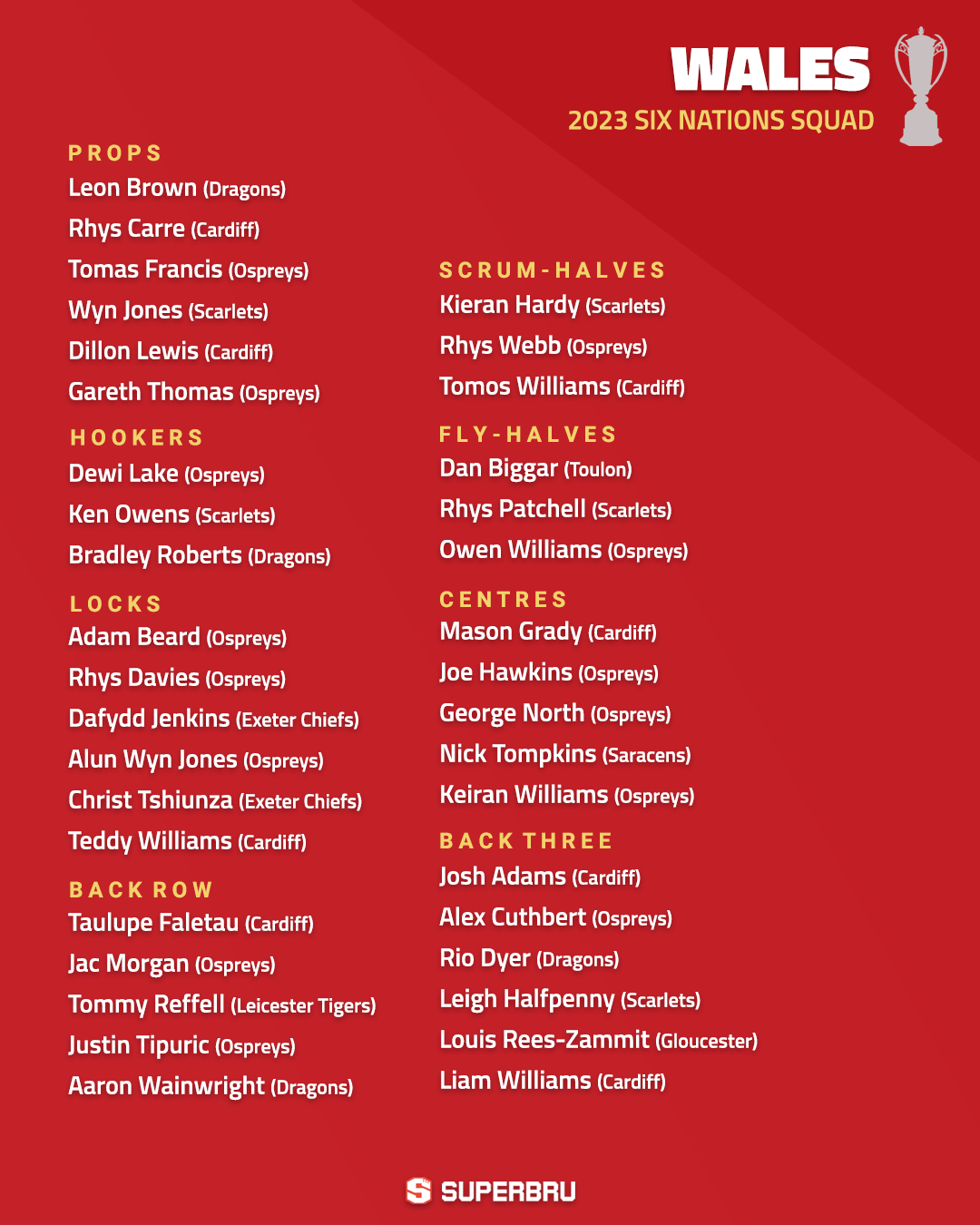 In our Six Nations Fantasy game, you can select a 23-man squad for the tournament and take on your friends. You're allowed a maximum of 6 players from a single nation and will be permitted 4 free transfers per round following kick-off: https://www.superbru.com/sixnationsfantasy
Enjoyed this? Share it!

TheVikingKing
3,959 caps
Can't wait for this year's Six Nations. It is going to be very interesting and one for the books.
Report

Jersey-puller
28,182 caps
These nations that have SO MANY from the same club have a big advantage, in terms of familiarity with each others' games, set pieces etc. Ireland has TWENTY from Leinster. Italy only has 16 from Benetton with Scotland picking 15 Glasgow Worriers. France, England & Wales have a prenty homogenous jumble though. Maybe there should be a club limit to how many in a game's 23 you can have?
Report