Jack  |  Operations & Media Manager
Thu 14 Jul 2022
Last weekend was a pretty tricky one on Superbru, wasn't it? The community average was just 3/9 as the Northern Hemisphere teams fought back to set up some exciting series deciders this week.

As Hutch is currently away, I'm stepping in to kick off the discussion about said deciders with some predictions for this final round. Many of you will know I'm usually the football predictions guy rather than rugby and I feel like I've been thrown in at the deep end here as these Round 3 picks look tough!

Here are my predictions for Round 3 of the July Internationals Predictor. Hutch will of course still be making his picks while away so I'll be sure to mention in the comments if I end up beating him in this round. 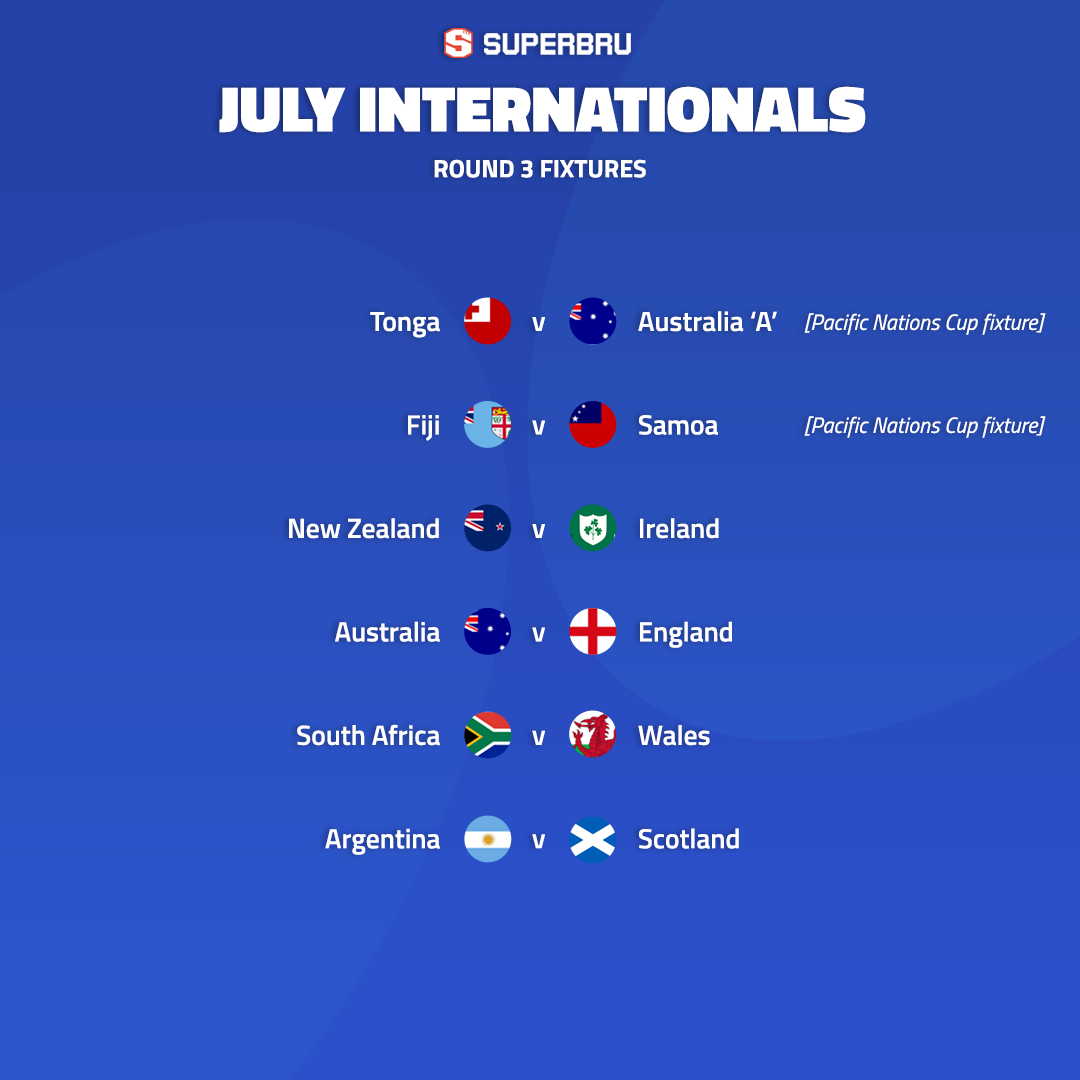 I'm not feeling particularly confident about any of these picks but this one looks a little more straightforward than the others after the Aussies' win over Fiji in Round 2. Let's go with them to start off. Australia A by 7

This should be a good battle with Samoa aiming for a perfect 3/3 wins in the Pacific Nations Cup but Fiji have come out on top in recent meetings and I feel like they can win this on home turf despite that defeat last time out. Fiji by 5

This should be a great game after last week's surprise result (picked by just 4%) and though the All Blacks are clearly more beatable at the moment than in previous years, it still feels tricky to pick against them in this series decider. I'm sure there'll be more picking Ireland than last week but I'm sticking with the hosts. New Zealand by 10

Bit of a coin flip this one, isn't it? Both teams are a little stretched squad wise due to injuries. I've picked Australia in each of the first two Tests but perhaps England's win in Brisbane is now reason to switch and go with heart rather than head. England by 3

After such narrow winning margins in the first two Tests, we can expect another close game in Cape Town but you'd think the Springboks will get the job done with so many regulars returning after last week's more experimental lineup. That team was still a very strong one as Hutch said so Wales did incredibly well to find their first victory on SA soil but stringing back-to-back wins together feels unlikely. South Africa by 5

We saw an impressive turnaround from the Scots last week to win with such a healthy margin and I think they can clinch the series here with that momentum though it will surely be much closer. Scotland by 2

Some very tough picks to finish with! Good luck with your own and feel free to tell me where I've gone wrong in the comments.
Enjoyed this? Share it!

Dyk13
6,682 caps
I think all the matches will be close, won by less than 7. NZ, ENG, SA and SCO will win their respective series. I agree with all your picks Hutch, except Fiji and Samoa, Samoa to scrape it at the end, Samoa by 2.
Report

The Gunslinger
5,259 caps
Another weekend of unpredictable results. Very hard to choose.
Report

James
57,567 caps
Agree with all Jack except Scotland don't see them winning again. Also NZ and SA will both win by 10 or more. Aus Eng should be a cracker with Eng just taking it.
Report

Larry
4,825 caps
Wales to win the series. Wales by less than 7.
Report

Jersey-puller
26,204 caps
I'm going tactical as I'm in that liberating position of being mid-table in my pools. So pick according the outcome fewer Brus will go with. I've little to lose but if most come off I'll be laughing. But I won't go too bonkers. Cards, enforced replacements, missed kicks and most importantly the chance to create visiting team history could swing it for me.....or not?
Report

Fish
50,867 caps
Not a bad weekend pick, only got the Ausie game wrong, all others spot on.
Report

The Gunslinger
5,259 caps
4 out of six. The Aussies and All Blacks let me down again.
Report

dugardy
12,667 caps
I dont think anyone saw that AB result comming and Im still bitter about THAT SA selection last week, even if the Boks beat the AB's 2-0 with 15 point margins they gain zip for it.
Report
Edition: North America change
Superbru on Facebook
Superbru on Twitter
Superbru on Instagram