Hutch  |  Commercial Director
Thu 7 Jul 2022
I was an interception try away from a GSP in Round 1, with 7 out of 8 correct picks and a late try for Samoa to unexpectedly beat Australia A.

This week, we have 9 fixtures to contend with, but a bit more recent form to go on. 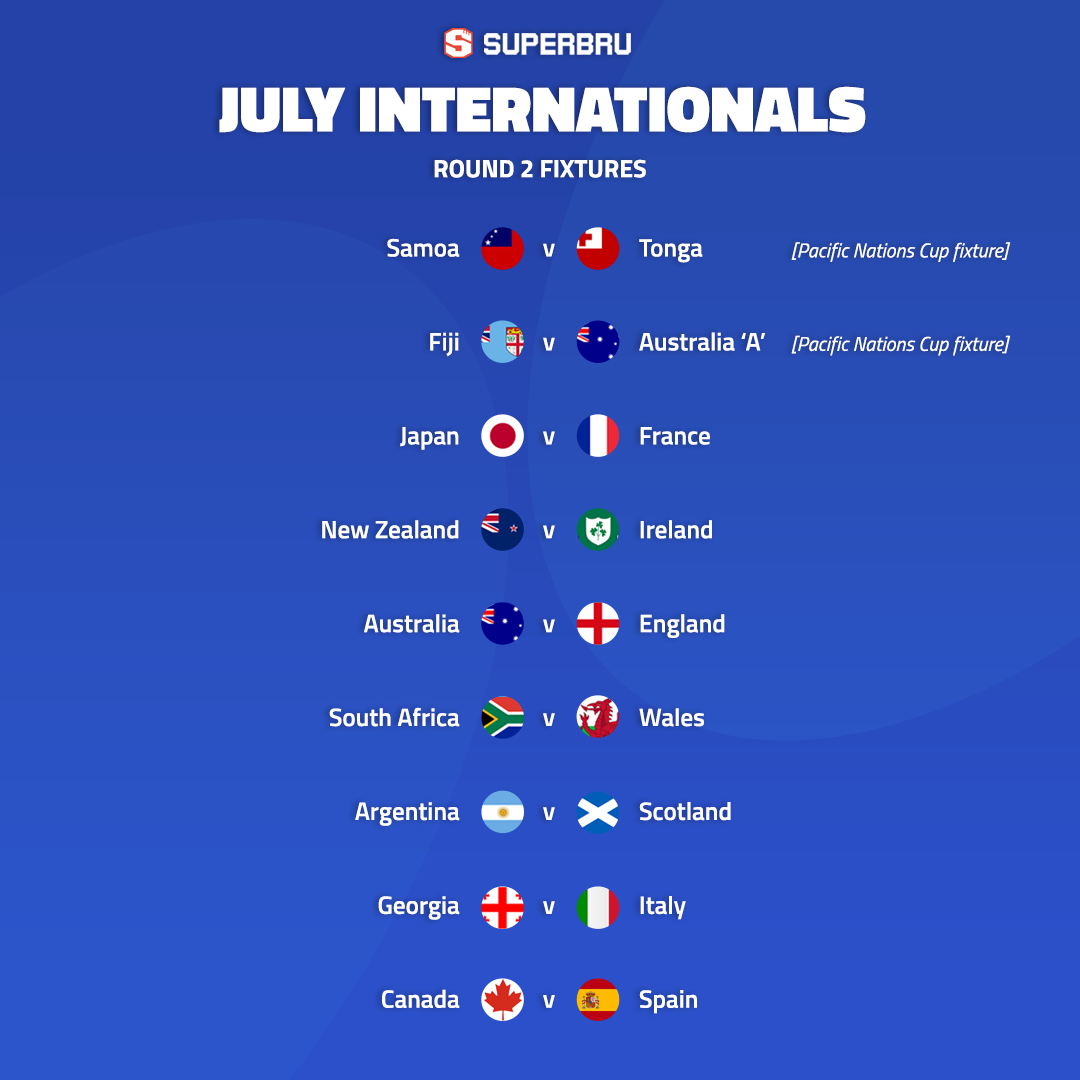 Israel Folau’s return to Test rugby was fairly anticlimactic, and he’s likely to miss this weekend’s game through injury. I expect Samoa to record another win. Samoa by 13

It was a big win for Fiji in Suva last weekend, and they should be even better this week for that experience together. The Aussies will also improve though, and whilst picking a home win feels safer, I think the Aussies might sneak it. Australia A by 2

The first Test was a bit closer than the scoreline suggests, but France should still win the second Test fairly comfortably as well. France by 18

I fear a little for Ireland in the rest of the series, given that a gutsy effort in the 1st Test still resulted in a 23-point defeat. I’m predicting more of the same from the All Blacks in week 2. New Zealand by 23

If England couldn’t win when Australia were hampered by injuries and red cards, how can they possibly solve their problems sufficiently to beat 15 men? Australia by 7

Lots of changes for the Springboks, but actually it’s a strong lineup picked on form and there shouldn’t be any of last week’s complacency to let Wales build a lead. South Africa by 18

The Scots need a big turnaround in performance too, but I think Argentina will step up their game and win again. Argentina by 9

I’m tempted to pick Georgia here, and it should be a passionate affair in front of their home crowd. Italy seem to be on the up though, and they are the form pick. Italy by 7

I think Spain can cause an upset here, with Canada rebuilding having reached rock bottom after failing to qualify for the World Cup. Spain by 6
Enjoyed this? Share it!

The Gunslinger
5,259 caps
I got 8 out 8 in the last round. Looking for that ten match streak. Good luck in the next round.
Report

Theogod
69,520 caps
Italy by much bigger margin and I cannot see Spain beating Canada. Fiji by 10. No GSP for you Hutch. Sorry man.
Report

Supermario
76,393 caps
Canada & Fiji for me, but agree with the rest
Report

Big D
7,468 caps
I agree with most, but England might spring a surprise and Fiji will definitely win.
Report

dugardy
12,667 caps
Fiji & Eng to edge Aussie in both games, I reckon
Report

Larry
4,825 caps
Wales by 3. SA were just lucky last week. If Wales had won, I would have got a GSP SA need to learn a lesson and the hard way. Hopefully E Jainties is dropped from the team for the rest of the season.
Report

ymfidds
1,947 cap
Curious comments about the Canada vs. Spain game!
Spain are higher in the world rankings and, if you had seen them play against the Barbarians the other week, you may have made a different choice for this game.
However, Spain don't travel well and it's a long way to Canada...

Jersey-puller
26,204 caps
I don't know which Work Experience Idiot Sky Sports UK have given the International Rugby Union Preview Captions job to but I'm guessing they don't watch much Rugby or Cricket for that matter, I quote

MarjK
2,186 caps
Just like to say that England were lucky to win last night with so many Wallabies unavailable with injuries it definitely helped them will be interesting to see what Dave Rennie comes up with?? Nice win by Ireland, hope they do it again. 9 Jul 15:14
Report

Bleskop
883 caps
Who do we select who is the mampara after losing to whales last week poor Jantjies took the blame.
Report

springa
2,276 caps
Hutch, you not doing so well this week??? All your southern hemisphere predictions down the tubes!!!!
Report

springa
2,276 caps
Hutch, another failure with Italy, time for a change of pundit???
Report

caplegal
27,664 caps
This weekend must be my worst result for 10 or more years. Spain is dealing to Canada as I write. If Spain wins I will have correctly scored 3 out of 9. Hutch, I think that we need a B section in the competition. None of my New Zealand and Australian colleagues foresaw the concentrated Northern attack coming.
Report

SUKI
29,785 caps
Big weekend coming - could this Ireland team achieve what was unthinkable only seven days ago? 11 Jul 11:49
Report