2021/22 Champions League: Round 6 Preview and Permutations

Jack  |  Social Media & Communities Manager
Tue 7 Dec 2021
Ahead of this final round of group stage action in this season's Champions League, we already have 11 confirmed teams in the Round of 16 meaning 5 places remain up for grabs and will be settled this week.

In addition to that main prize of a place in the knockouts, this week will also decide which teams will move into the Europa League playoffs round as the 3rd-placed team in each group will drop into that tournament. Though Europa League football would not be considered particularly attractive to some of the European giants that could yet finish 3rd in their group such as Barcelona, for other smaller teams it's a considerable prize so that's certainly something to consider when making your picks.

Both predictions and Odds-based fantasy picks tend to be tricky in this final round as we have to judge each team's motivation which naturally affects the lineups each manager will select. To help you get a clearer idea of how things may play out in each group, here's your preview where I'll run you through the permutations. 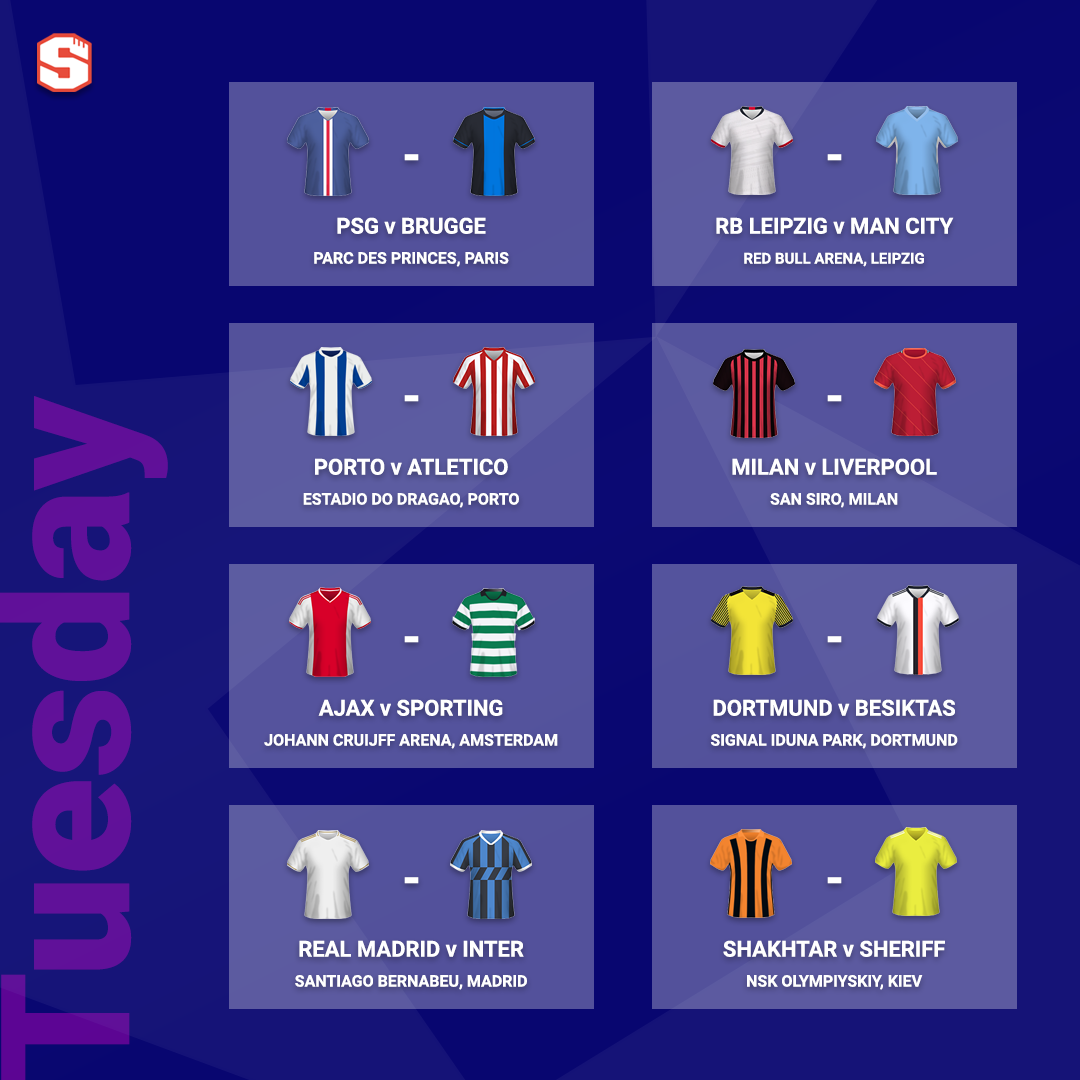 The situation: Team News: With 1st and 2nd already confirmed, there's clear potential for City and PSG to rotate. Pep Guardiola has already stated City will be taking several youth players to Leipzig but they may not start and City's squad is of course extremely strong so there are several 'first team players' already short of minutes who will likely get priority. Guardiola has suggested Kevin De Bruyne will start but Rodri, Bernardo Silva and Gabriel Jesus haven't travelled. Neymar is out injured for PSG while Herrera and Draxler are also doubts. Leipzig have plenty of injury concerns too including Poulsen, Orban, Olmo and Halstenberg.

Opinion: It's perhaps still difficult to pick against PSG and City but it's worth noting that for this group's games we'll be able to see team lineups which will help Odds-based fantasy players. Leipzig are perhaps more likely than Brugge to get a result given their home advantage but after their manager Jesse Marsch was sacked at the weekend following a 3rd defeat in 4 games, it's hard to tell how they'll perform.

The situation: Team news: Liverpool having little to play for could benefit Milan if Klopp decides to rotate. The Liverpool boss has said it is likely Divock Origi will start in attack after scoring the winner against Wolves in the PL on Saturday. Simon Kjaer is out for the season for Milan while Giroud and Rebic are doubts. Porto and Atleti each have a player suspended (Uribe and Felipe respectively) while Atletico have Carrasco, Gimenez and Savic as injury doubts.

Opinion: It'll be worth checking the Liverpool team before making your pick for that game. The other is far more black and white and I'd usually go Atleti to win this kind of match without hesitation (and probably still will) but their recent form is a concern - particularly their 1-2 loss at home to Mallorca on Saturday after taking the lead. Keep in mind that if Liverpool are beating Milan comfortably and things are tight in Portugal, Porto may well just park the bus and take the draw that would see them through.

The situation: Team news: With everything already settled, managers are likely to rest players where they can. Dortmund boss Marco Rose has already admitted he will be limiting Haaland's minutes in this game so he's a very risky Odds-based fantasy pick. BVB also have Can suspended and Brandt, Hazard and Reyna sidelined with injury.

Opinion: Given the teams involved, these games could still be pretty entertaining with nothing to play for but it makes predicting very tough. I'll be backing Ajax as I just think they're excellent and probably Dortmund despite their absentees because Besiktas have been awful so far.

The situation: Team news: The big news ahead of the significant game between Real and Inter is that Karim Benzema is out injured after being subbed after just 17 minutes in Real Madrid's 0-2 win over Sociedad on Saturday. Inter could be without Joaquin Correa and Stefan de Vrij. Shakhtar remain without striker Lassina Traore.

Opinion: Real Madrid and Inter are both in cracking form so it should be a great clash between those two. Benzema is a big loss for Madrid but Vinicius Jr is just on fire at the moment so with home advantage I'd fancy Carlo Ancelotti's team to at least manage a draw and take top spot. In the other game, I think Shakhtar could well finish with a win as Sheriff have fallen off after their good start (which has still earned them UEL football). Shakhtar absolutely dominated possession in their away defeat at Sheriff so should perhaps make it count with improved conversion this time around. 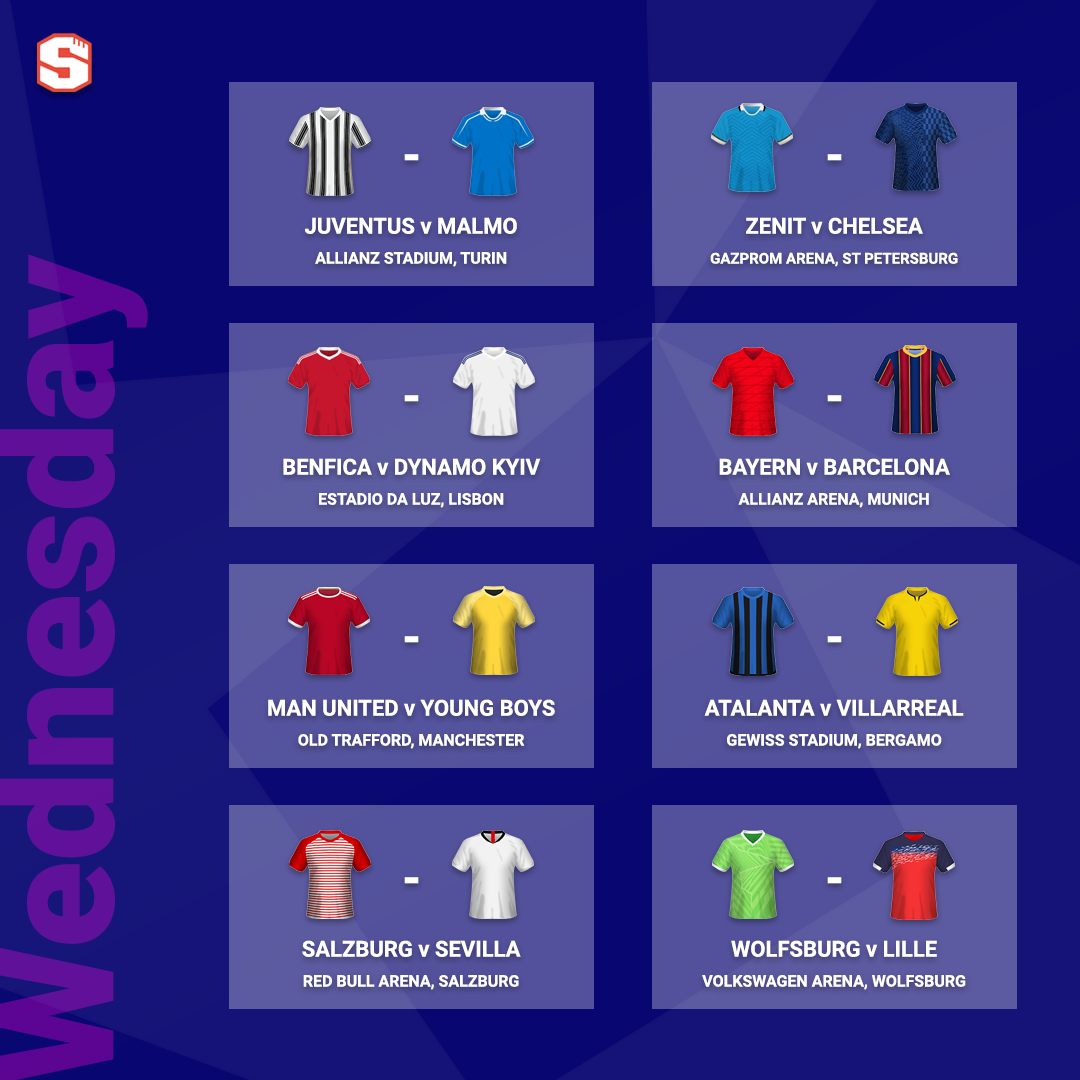 The situation: Team news: It remains to be seen if Bayern will go full strength but they do of course have an opportunity to eliminate a fellow giant. Joshua Kimmich has been absent in recent games due to covid/quarantine and remains a doubt. Ansu Fati is out for Barcelona while Pedri, Sergio Roberto and Martin Braithwaite are also doubts. Benfica won't have centre back Lucas Verissimo available to face Dynamo due to a knee problem.

Opinion: I think Barcelona are struggling here. You'd certainly expect Benfica to win and then Barca winning at Bayern seems very unlikely given their current state. Bayern don't tend to go extremely soft with team rotation in this competition and I can't see that starting now against this opponent.

The situation: Team News: Atalanta and Villarreal should both be close to full strength - Gosens is the only notable injury doubt for Atalanta while Villarreal have Pino suspended. Manchester United remain without Paul Pogba and likely both Edinson Cavani and Raphael Varane.

Opinion: Atalanta v Villarreal should be a great watch with Atalanta aiming to do what they do best and score a lot of goals to get the win while Villarreal do all they can to manage at least a point. It's quite tricky to call but recent form would suggest Villarreal will struggle to keep them out in my opinion. United may well rotate against Young Boys but should win as they aim to continue impressing new manager Ralf Rangnick.

The situation: Team news: Salzburg have a few injury doubts including Noah Okafor while Sevilla are likely to be without Marcos Acuna, Jesus Navas and Erik Lamela. Wolfsburg goalkeeper Koen Casteels has been out with covid. Lille have central midfielder Xeka and winger Jonathan Bamba suspended.

Opinion: This group has been very unpredictable which has resulted in what should be an excellent final day. I personally feel Salzburg and Lille deserve to go through so that's probably who I'll be backing, particularly since Wolfsburg have fallen back into poor form. Salzburg will have to really earn their place in a tough final game against Sevilla but I think they can manage the point they need despite Sevilla's considerable experience in big European matches.

The situation: Team news: Juventus' injury doubts include Aaron Ramsey, Danilo and Federico Chiesa. Zenit have Chistyakov suspended. Chelsea have a number of players out including Chalobah, Kante, Kovacic, Chilwell and doubts over Alonso and Havertz.

Opinion: You'd expect this group to remain as it is with both Chelsea and Juve winning. Thomas Tuchel will be eager to try and get Chelsea back to looking strong and dominant after a patchy week in the Premier League but that is likely to involve attempting to get the likes of Romelu Lukaku back match fit and firing as opposed to heavy rotation with a severely weakened team.