Jack  |  Social Media & Communities Manager
Tue 14 Sep 2021
The opening round of Champions League group stage matches is always an exciting time for football fans as Europe's best begin the journey towards the most desired trophy in club football. Chelsea are of course the defending champions after their 1-0 win over Manchester City in Porto back in May.

This season, the English teams look strongest once again and you certainly wouldn't rule out another final between Premier League clubs. The financial strain caused by the pandemic has affected top leagues in other nations far more than it has in England given the money generated by the Premier League, though PSG are a big exception in France and given the players that they have brought in this summer, anything other than winning this competition would be considered an underachievement in the eyes of many.

A good start is always important to set the tone so let's get into Round 1 and a brief preview of the games taking place on each night, starting with this evening (Tuesday). Nearly every group has at least two very strong teams meaning a big club slipping up in a group game that they're expected to win could prove very costly. 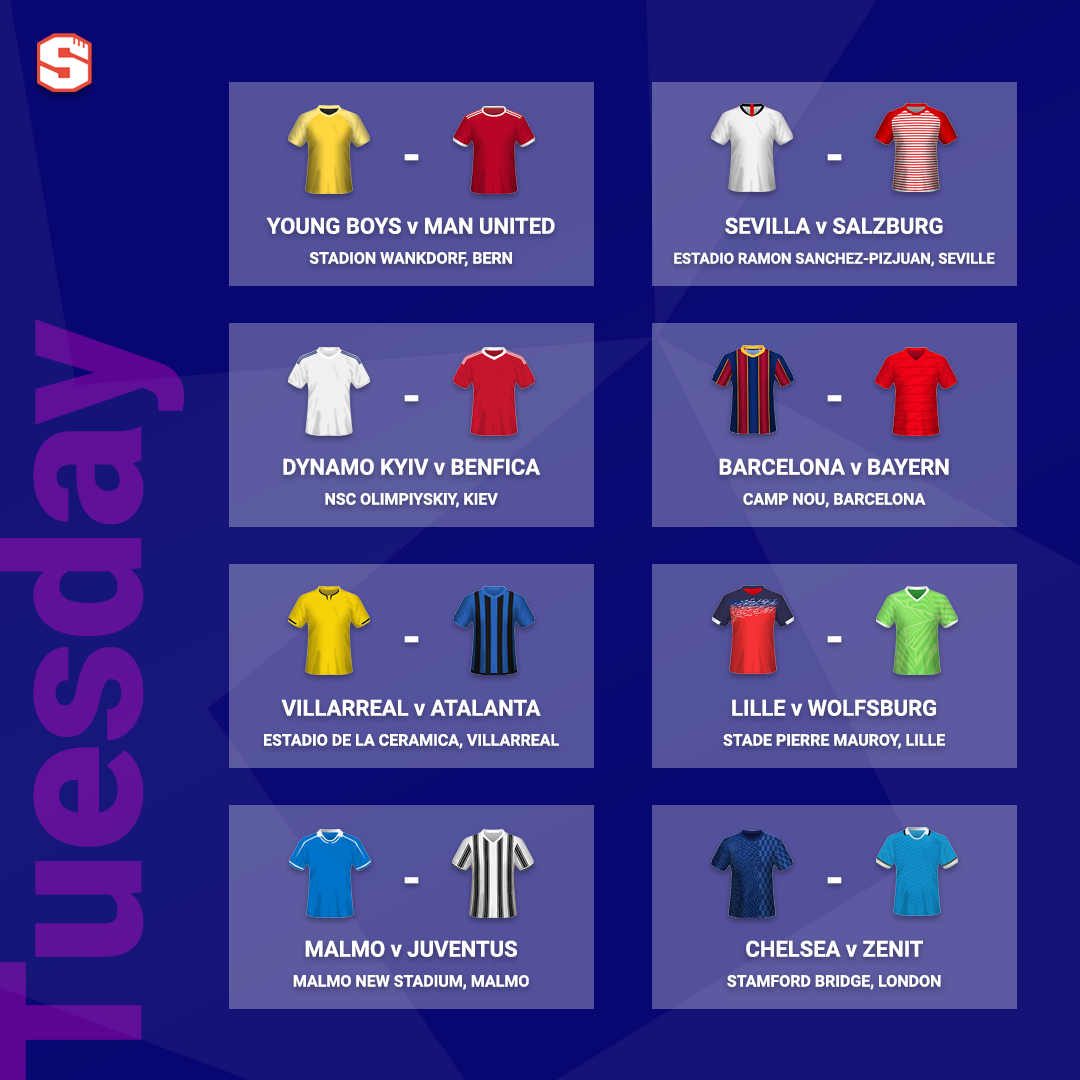 Barcelona vs. Bayern Munich is undoubtedly a battle between two giants of European football but as many of you will remember, the last tie between these two in the UCL wasn't particularly close and Barca have only got weaker since that 8-2 hammering. In addition to the huge loss of Lionel Messi because of Barcelona's terrible financial situation, Antoine Griezmann left on deadline day, Ansu Fati still isn't fit and Sergio Aguero, Martin Braithwaite and Ousmane Dembele are all also injured meaning Ronald Koeman does not have many forwards to choose from. Memphis Depay will be the key man for much of the season after arriving from Lyon while Luuk de Jong (who arrived as a late replacement for Griezmann), Yusuf Demir and Phillipe Coutinho are the only other realistic forward options to join him.

Bayern are therefore fairly strong favourites at the Nou Camp under new manager Julian Nagelsmann who after drawing his opening game of the Bundesliga season has seen his new team win 5 in a row across all competitions, the most recent of those victories coming against his former team RB Leipzig on Saturday. Centre back Dayot Upamecano and midfielder Marcel Sabitzer have also made the switch from Leipzig to Bayern for this season.

Dynamo Kyiv vs. Benfica is a fairly awkward pick in this first round with Benfica the stronger side on paper but without home advantage. The Portuguese side are in excellent form and sit top of their league with 5 wins out of 5 but Dynamo are also not used to losing and lead the way in Ukraine with 6 wins and a draw from their 7 games. Both sides will feel they have something to prove in this competition after Dynamo were drawn in a tough group with Barcelona and Juve last season, while Benfica have failed to reach the knockout stages since 2017 and didn't even reach this group stage last season.

No doubt still pumped by the electric atmosphere at Old Trafford for Cristiano Ronaldo's second debut for the club on Saturday, Manchester United should comfortably defeat Swiss champions Young Boys in the first of these two games which is one of the early kick-offs this evening (17:45 UK). Young Boys were absolutely dominant in Switzerland last season, winning the league by 31 points, but haven't been in the group stage of this competition since 2018 and have only won 2 of their 5 league games in the current campaign.

Villarreal vs. Atalanta promises to be far more even with an intriguing clash of styles. Unai Emery won yet another Europa League last season as he guided this Villarreal team to victory over Manchester United and though they won't always be great to watch, it'll be interesting to see if he can transfer his Europa League mastery to the UCL this season. Atalanta tend to be a far more attacking, free-flowing side (though they've had a bumpy start to their Serie A season) and having reached the quarter-finals in their debut Champions League campaign before following it up by reaching the Last 16 last season, Gasperini will expect his team to progress from this group, too. Hans Hateboer and striker Luis Muriel are injury doubts but Duvan Zapata made his first appearance of the season and scored on Saturday - he'll likely lead the line in this one.

This group looks a fairly open one where each team will feel they have a chance. Salzburg are the underdogs but they were entertaining last season, scoring 10 goals in their 6 group stage games despite facing Bayern and Atletico, while the major reason for this group feeling open is that surprise Ligue 1 champions Lille are the Pot 1 team and they've lost many of the people that helped them to that title including goalkeeper Mike Maignan (to Milan) and manager Christophe Galtier (to Nice).

As a solid side with plenty of experience in European football, Sevilla are probably group favourites and should defeat Salzburg this evening while Wolfsburg will likely feel that they can progress from this group ahead of Lille meaning tonight's clash at Stade Pierre-Mauroy is already a vital one. Lille have not looked like champions at all so far in the current league campaign, winning just 1 of their 5 games whereas Wolfsburg have had a perfect start in Germany, sitting top of the Bundesliga with a 100% record after 4 matches.

Group H looks a little more clear cut in the sense that there are two strong favourites to progress in Chelsea and Juve while Zenit and Malmo are likely to be left to battle it out for 3rd and a place in the Europa League knockouts. With that in mind, there are two clear favourites for tonight's games.

There's a chance of some rotation from Chelsea against Zenit given that they have Spurs on Sunday in the Premier League, though Tuchel already made plenty of changes following the international break for Saturday's 3-0 win over Villa. N'Golo Kante could return tonight following an ankle injury but Christian Pulisic remains out. The team news for Juve is that neither Federico Bernadeschi nor Federico Chiesa have been named in their travelling squad for Malmo due to injuries. Malmo are currently 4th in the Allsvenskan after 18 games, 3 points off leaders Djurgarden. 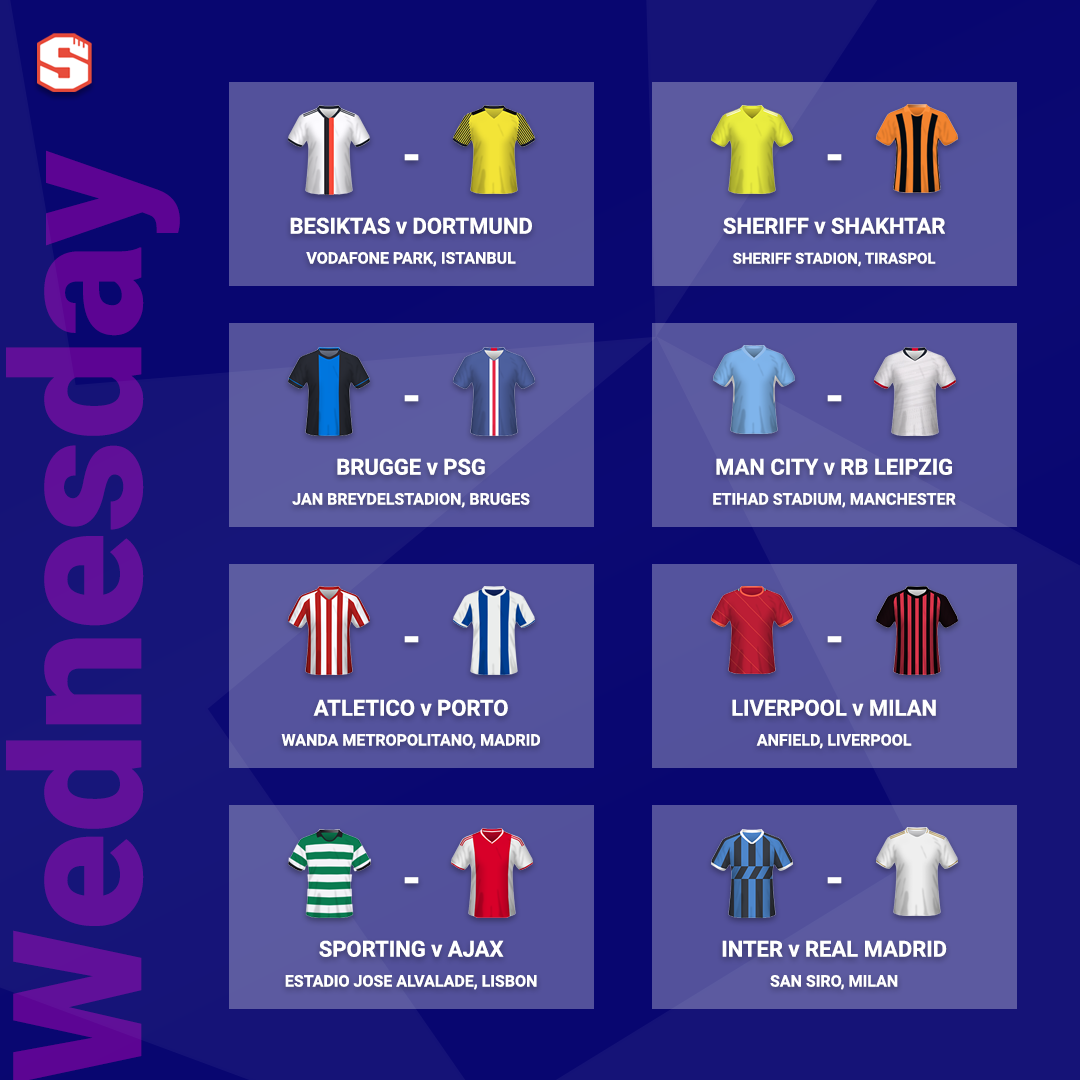 Brugge put in some very respectable performances in last season's Champions League group stage against some strong teams so they're able underdogs in this group, but realistically Group A should see PSG and Manchester City battle for top spot and RB Leipzig finish third. Leipzig are of course a strong Bundesliga side with some very good players who will feel they have a chance of upsetting one of the big two but early season form suggests this season's Leipzig will not be as strong as the one we saw in 2020/21 as they get used to life under new coach Jesse Marsch.

PSG will be without Idrissa Gueye and Angel di Maria tomorrow due to suspension while Sergio Ramos is yet to make his debut because of a calf injury. The much anticipated front 3 of Neymar, Kylian Mbappe and Lionel Messi could well lineup in Belgium. Manchester City have won their last 3 Premier League games without conceding so look in good form ahead of their potentially tricky opening clash against Leipzig but the visitors have lost 3 of their 4 opening league fixtures and were comfortably beaten 1-4 by Bayern at the weekend.

Just look at those four teams, what a group. Every game is set to be very important in Group B. You'd think home advantage will be pretty significant for each of these four clubs and with that in mind, the most logical picks for this week are 2 home wins, especially since Atleti and Liverpool are favourites to progress.

La Liga champions Atletico have been strengthened further this season by the arrival of Matheus Cunha from Hertha Berlin and the return of Antoine Griezmann from Barcelona. Diego Simeone's team have been leaving things very late in recent games (Thomas Lemar scored a 99th minute winner on Sunday) but they've picked up 10/12 points so far in their league campaign nevertheless. Remember not to underestimate Porto though - they were very strong in the group stage last season and eliminated Juventus in the knockouts before losing to eventual winners Chelsea.

Liverpool are favourites against pretty much whoever they play at Anfield and their opening clash with Milan is no exception but this should also be a very interesting game given that Milan have won all 3 of their opening Serie A games. There was also the possibility that we see both Olivier Giroud and Zlatan Ibrahimovic start together in attack after the latter returned from injury at the weekend would have been really fun but very recent reports suggest Ibrahimovic is a doubt again fitness wise.

Another interesting group. Dortmund are favourites (largely because of Erling Haaland) but also unpredictable, Ajax are always competitive in this competition, Sporting are champions of an increasingly strong Portuguese league and Besiktas won't be easy to beat, especially away from home.

We'll find out just how tough Besiktas will be to visit on Wednesday when Dortmund head to Istanbul. The Turkish side have plenty of familiar faces, including two new arrivals in Michy Batshuayi from Chelsea and Miralem Pjanic from Barcelona. There's always a chance for goals against Dortmund, but preventing the Bundesliga side from scoring plenty themselves won't be easy - particularly since Haaland has scored 5 goals in 4 games so far this season and tends to be even more prolific in this tournament.

Sporting v Ajax is a very tough pick with both teams unbeaten so far this season in their league campaigns. I personally have Ajax as narrow favourites, particularly now that Sebastien Haller has been in form to convert the numerous chances Ajax create. Pedro Goncalves is a player to watch for Sporting but there are reports that he might be out with a knee problem.

A repeat of a group from last season's competition except FC Sheriff have replaced Borussia Monchengladbach. I'm afraid I have very little knowledge on FC Sheriff but what a story that the Moldovan side have made it to this stage following qualifying wins over Red Star and Dinamo Zagreb! They, along with Shakhtar, are expected to finish beneath Inter and Real Madrid in this group on paper but remember what happened last season - Inter haven't performed well in this competition for a long time and finished below Shakhtar who somehow only managed 3rd despite beating Real Madrid twice.

So Shakhtar are definitely a team to watch in this group as they should beat Sheriff on Wednesday and then will be back to annoy Inter and Real again who they didn't lose a single game against in the 4 meetings last season. Tomorrow's clash between the big two is hard to call with both starting the season nicely under new managers. Inter have scored 9 goals in their first 3 league games under Simone Inzaghi and are narrow favourites according to the bookies but I wouldn't be surprised to see Ancelotti's Real manage a result given their pedigree in this competition and the form of Karim Benzema.

I hope this has set the scene a but and provided a few pointers for your predictions. Best of luck in Round 1!
Enjoyed this? Share it!

The Gunslinger
704 caps
I can do better.