Jack  |  Social Media & Communities Manager
Fri 18 Sep 2020
I was fairly pleased with my opening round of predictions. 5/8 isn't a terrible start given the community percentages and an exact for the Chelsea game helped my ranking on pool leaderboards. Wolves was probably the only one I was disappointed to get wrong and we now have a tricky round with the full 10 fixtures to contend with in Round 2.

Some big fixtures including Chelsea v Liverpool should make the predictor and our odds-based fantasy game very interesting this weekend! Here are my thoughts on each fixture, feel free to leave your own in the comments section below. 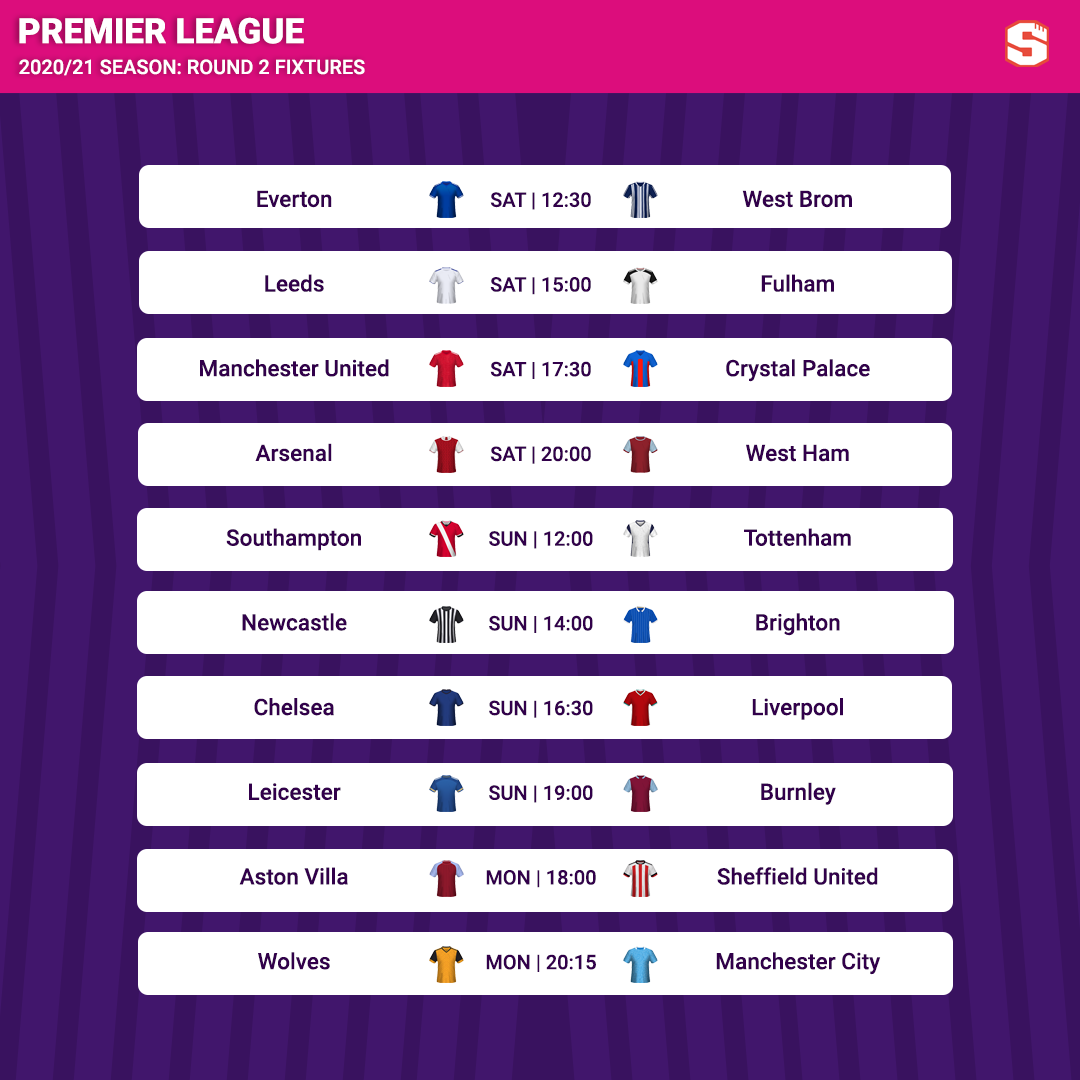 This looks a fairly straightforward pick to begin with. I said last week that I expect Everton to be really strong after a few weeks but I wasn’t expecting them to defeat a big six club away from home on the opening week so fair play to them! West Brom started okay against Leicester before falling away and it would be impressive if they even managed a point here. Prediction: Everton 2-0 West Brom

This match should tell us a lot more about each of these teams than we learned last week when they played such strong opposition. Of course, Leeds will be the happier of the two with their Round 1 display but whilst it was of course a fantastic game to watch at Anfield, I think those labelling it as a ‘top half team performance’ from Leeds are getting a bit carried away. They defended as badly as Liverpool did but were obviously clinical in scoring with each of their shots on target. This is now a game that they should win and I’m backing them to do so at home but it’ll be interesting to see how they perform in a match that they should control. Mitrovic and co. will definitely feel they can threaten. Prediction: Leeds 2-1 Fulham

As United found last year, this is a potential banana skin in their opening game because Palace are pretty good away but I’d be surprised to see the Eagles win at Old Trafford again. I’m fascinated to see how United start because van de Beek is an excellent player but they surely can’t have a midfield three of him, Pogba and Bruno? You’d think Fred or Matic have to start to provide some defensive stability but we’ll see what happens. Either way, if Bruno and United’s front three perform as they did towards the start of Project Restart then this will be a tough afternoon for Palace. Prediction: Man Utd 3-1 Crystal Palace

Arsenal should complete a Saturday of home wins here in my opinion. The fact that Arteta has managed to keep Aubameyang at the club is up there with his FA Cup win as an achievement since arriving at the Emirates and confidence is very high for the Gunners going into this. West Ham were beaten at home by Newcastle last week as I expected and if you don’t win that match then it’s very hard to see you winning this. Arsenal’s ability to play out from the back and counter teams under Arteta makes it so dangerous to commit players to attack against them. Prediction: Arsenal 2-0 West Ham

I was fairly confident that Southampton would not only be good this year, but that they’d start well too and after just two games in the space of about 5 days, I’m already a little worried I was wrong! Losing at Palace can happen but the fact that Saints then played such a strong XI in the Cup to regain confidence and still lost to Brentford is a little concerning. Hasenhuttl’s comments post-match suggest even he’s not sure he can fix it without player arrivals. This remains a tough pick because Saints are still capable but I think I’m going for Spurs despite their Thursday trip to Bulgaria. They saved themselves from an embarrassing loss in that game and confidence will surely be up if the arrivals of Reguilon and Bale are confirmed (as expected) by the time you’re reading this. Prediction: Southampton 0-1 Tottenham

Tricky one. Brighton started this campaign in a similar way to how they were for much of last season - playing really nicely but ultimately losing. That might continue to be the case unless Maupay or someone else can regularly find the net but at the same time, when your build up play is tidy there’s always going to be the chances so it’s hard to call this match. I think it’s safer to go for Newcastle who have a more obvious goal threat in Wilson and started with a good win at West Ham. Prediction: Newcastle 2-1 Brighton

The first big fixture of the season and most are expecting goals! Liverpool have been dreadful at the back since winning the title last season and Chelsea’s defensive issues also remain, particularly from set pieces. I’m not really convinced enough by either of these teams to pick them to win this game so I’m going for a draw. Liverpool are the more likely to win, especially since Chelsea are missing Pulisic and Ziyech, but Timo Werner could be so dangerous against their high line. I don’t think either team will be confident enough in themselves to sit on a lead so it’s hard to see a low scoring game (even though we often get 1-0's in games where everyone says this!). Prediction: Chelsea 2-2 Liverpool

Now, you have to be very careful when writing Burnley off because Dyche always finds a way to not only keep them in the Premier League but compete with the top half, however, this really does look like a tough start for them and Dyche himself appeared to be losing patience slightly post-lockdown last season. The Clarets still have injury issues, are fighting to keep hold of a couple of players and don't look to be bringing many in. I think they'll be fine this season all whilst Dyche is there but I'd be surprised to see them getting anything in this game as Leicester started well at West Brom. Prediction: Leicester 2-0 Burnley

I'm excited to see how Villa go in these opening weeks. Grealish staying is massive, Ollie Watkins should be sharp up front for them and Martinez obviously seems like a pretty good signing in goal following his displays for Arsenal in some big games. I feel like Sheffield United should be okay this season after such a good first campaign back in the top flight but I do understand why some are expecting them to have a difficult second season because it might not be easy to bring in new, higher quality players and have them fit with such a perfected system that their current squad is used to. I was planning on going for a draw in this game but actually feel tempted to pick Villa as I think they've made some really sensible signings. Prediction: Aston Villa 2-1 Sheffield United

Another tough pick to finish. Guardiola is yet to win a match at Molineux so this is a difficult start for City and I'm torn between picking 1-1 and 1-2. After a decent start in the window bringing in Torres and Ake, City appear to have paused since the Messi saga blew up and I think fans are rightly a little concerned about whether or not they'll get other deals over the line. Koulibaly is still a much-needed signing they're supposedly working on and now that Liverpool are signing Thiago, City might need even more if they're to get the title back. Wolves are an impressive side and I might well back them for a point depending on the City backline that is selected but otherwise I think the visitors will just sneak it. They now have a (already needed) strong replacement for Laporte in Ake so his absence shouldn't be felt as much. Prediction: Wolves 1-2 Manchester City

Good luck to all with your predictions in Round 2!
Enjoyed this? Share it!

Yetti
7,513 caps
Why you so conservative with your scores ?
Somehow teams are scoring more goals than usual ????
Report

Rufus
38,582 caps
hey does this bother anyone else or is it just me. when i'm doing my picks and click on historic results it would be great if this screen that pops up is set more to the left so you can see the actual ladder. then it makes it easier to analyse games already played and where that opposition is on the ladder. that's my only gripe for this year apart from BLOODY COVID ruining sport around the world.
Report