Jack  |  Social Media & Communities Manager
Fri 1 Jan 2021
Happy New Year all! I hope you've all had an enjoyable festive period and feel optimistic about 2021. Recent events in the Premier League have been a harsh reminder that there's still going to be plenty of virus-related chaos in this new year but let's hope we can get on top of it soon enough and have the rest of the season play out 'normally' before enjoying Euro '2020' this summer.

Speculation of a 2-week break in the PL calendar following the postponements in Round 16 has been rubbished by the league so the show goes on and the potential disruption and missing players at clubs like Fulham and Manchester City are an added factor to consider when making your picks.

Aside from the 5 goals Leeds scored at West Brom in Round 16, the fact that none of the other fixtures had more than 2 goals in total is, I fear, a sign of this schedule really starting to take it's toll on everyone. Will we see more low-scoring affairs in this round? Here are my picks. 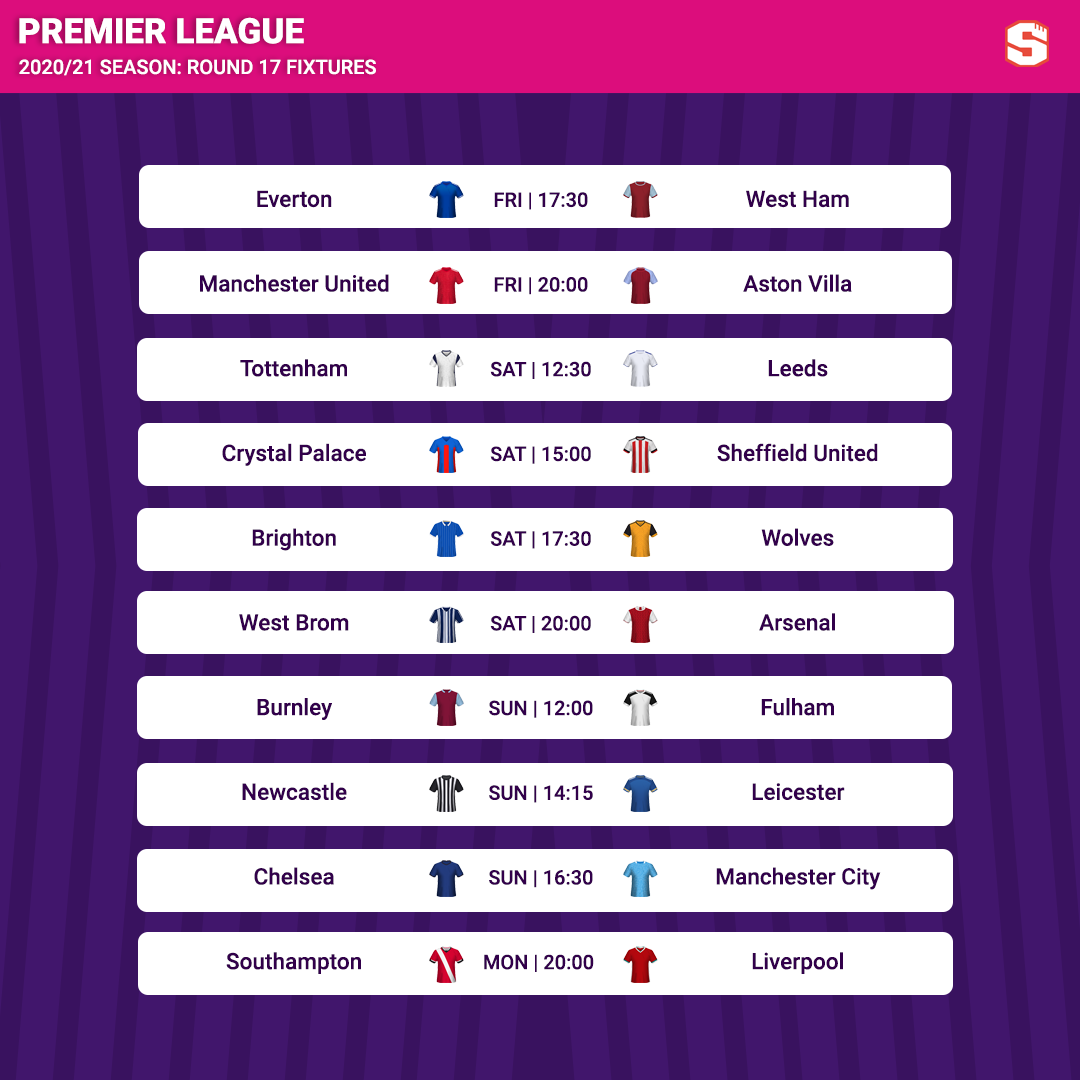 I think Everton's winning run should continue here, especially as they've ended up with more time than expected to prepare for the match following the postponement of their City game. West Ham remain dangerous but have gone off the boil a bit so I think this should be a fairly comfortable home win. Prediction: Everton 2-0 West Ham

I'm hoping this will be a great game to watch between two quality sides. It really didn't look like United were going to find a winner against Wolves so that was massive for them and they now have a chance to go joint top. Villa continue to look good though and I think I'm tempted to go for a draw. There are still a couple of question marks around United's home form and Villa have only lost once on the road. Prediction: Man. United 1-1 Aston Villa

A difficult one. Tottenham are obviously a pretty good counter-attacking side but whereas it was obvious Leeds would get hammered by Manchester United a few rounds ago, I'm not sure this game suits Tottenham quite as much since they tend to counter with fewer players and have a fairly obvious supply line in Harry Kane. Could we see Spurs' defensive midfield players step out and carry the ball forward more like McTominay and Fred did for Man. United in this fixture? Leeds will cause problems as always and I think Mourinho is likely to be focusing on how to stop those rather than just making this as high scoring as possible. With home advantage and fresher players after a fixture postponement, Tottenham should have the edge but I think this will be fairly close. Prediction: Tottenham 2-1 Leeds

A decent point for Palace against Leicester last time out adds a little extra comfort while picking them here. We're still avoiding a Sheffield United pick until they prove that they can win a match. Prediction: Crystal Palace 1-0 Sheffield United

It's a shame when you see them play such tidy football a lot of the time but Brighton fans are understandably losing patience with Potter and he needs some wins. Just 1 home win in the whole of 2020 is obviously terrible but this won't be an easy game to try and kick start a better home record in 2021. I think Wolves will remain relatively toothless up front so that's why I'm going for a draw but if a team is to win it's more likely to be the visitors in my opinion. Prediction: Brighton 0-0 Wolves

Arsenal appear to have turned at least a slight corner after back-to-back wins and West Brom have somehow managed to destroy all the confidence gained from drawing at Anfield by getting beat 0-5 at home against Leeds. Arsenal aren't going to be as dangerous or clinical as Leeds in this match but I just can't see how West Brom hurt them so they should win. Prediction: West Brom 0-2 Arsenal

Even if Fulham are able to play this match, it's fair to assume they've been pretty disrupted and will be missing some players. I think Burnley are even stronger favourites than they'd usually be as a result. Prediction: Burnley 2-0 Fulham

Leicester have been my bogey team so far this season so I constantly find myself second guessing their results. I'm not sure they're strong enough to win this after Newcastle's decent display against Liverpool but then again it's fair to assume Vardy will start after being benched at Palace. The Foxes are the safe pick and I think I'm going with that as I don't have enough faith in Newcastle to pick up consecutive good results. Prediction: Newcastle 1-3 Leicester

This is one where we really need to see the Manchester City lineup before picking I think. Gabriel Jesus and Kyle Walker will remain out but it's unknown who the other players that have tested positive are - there are of course rumours about who they might be but unless confirmed I think it's silly to judge this game based on potential team news. If both teams were at full strength I'd be picking a narrow City win here but if they're several players down and Hakim Ziyech is back for Chelsea then suddenly I make the Blues favourites. I'm going down the middle and sitting on the fence for now. I don't think there'll be many goals either way. Prediction: Chelsea 1-1 Man. City

I think you still have to go Liverpool here but their last two results will of course be concerning for Klopp. Yes, they haven't lost but that's 4 points dropped across two very winnable games and the pressure is growing ahead of what should be a great game between them and Manchester United soon. Southampton's lack of goals is suddenly a slight worry for the Saints and I think that's another thing pushing me towards picking Liverpool even though I don't think it'll be a long-term issue for them. Prediction: Southampton 0-2 Liverpool

Marching On Together
2,909 caps
Hello slumdogs as far as I know a "player" will only recieve 1 point for a maximum amount, in any particular season.

For example they would get 10 x 1 points (def) for a maximum of the premiership season.

So in my opinion it is fair and reasonable.

DreadedRed
15,457 caps
Hey Derek! The 'Default Pick' system is a bit contentious, you're right. I also felt it was unnecessary and unfair, but I can't disagree with the logic behind it. Over the season of 38 rounds, most people will experience internet failures in their region, and the odd family/work emergency. Missing a round or two of picks is very likely to occur. This unfortunately inspires some brus to impetuously stop picking. The Defaults never pay out as much as actual picks, so the affected bru is still disadvantaged, and therefore tries hard to ensure that it doesn't happen again.

The 'upper echelon' of brus, that are aiming for a Global Top 1% finish, will ensure that they don't miss any picks. The brus who are less focussed on performance and therefore accidentally miss a few rounds, will not make it into the Top 1%, so they are no threat. 2 Jan 07:43

Jersey-puller
20,155 caps
Yes its only 1 point, so no extra 0.5 Close points or 2 extra for Exacts or the pretty easy to get 1 Slam point if your most popular outcomes defaults saw you get 5 out of 10 right. It ALWAYS pays to get some very early 'Safety Picks' in that you can change later.

What I don't like or understand is locking then being able to see others picks. Its a charter for collaborating 'Pick-Lock-Peek-Blab' merchants. 2 Jan 15:18

DreadedRed
15,457 caps
Ah, the PLPB brigade, I always wondered what that stood for. The viewing of everyone else's picks after locking can be disabled by the captain. However, some members of my family/friends pools do like to see what everyone's picks are before the game, and I know there's nothing nefarious going on, so it's cool. I reckon the PLPBs should be easy to spot, even if they only try it in the final round. Twits. 6 Jan 18:59
Report

Leandro
466 caps
This round ain’t bad at all

Upton Park
165 caps
I thought you can miss 10 games and still get a point, I've missed 4 games and recieved 0 points
Report